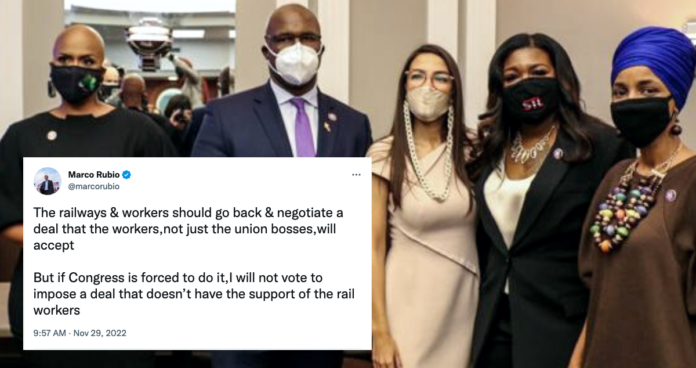 The very fact that there is a law on the books from 1926 that allows the government to restrict rail workers’ right to strike is evidence enough that for the capitalist ruling class, no maneuver is too rotten when the billions in profits of the railroad tycoons are at stake. In the grand finale for the 2021-22 Democratic majority, Biden’s dream of joining forces across the aisle has come to fruition in an act of wholly bipartisan collusion to crush the rail workers.

If any force in Congress should be expected to oppose this maneuver and take a stand against the federal government teaming up with the rail barons and conservative union leaderships to override rank-and-file democracy and deliver a devastating blow to workers rights, it should be the Squad. Astonishingly, Alexandria Ocasio-Cortez, Ilhan Omar, Ayanna Pressley, Jamaal Bowman, and Cori Bush lined up behind the Biden administration to vote “Yes” on forcing the contract agreement that the majority of 100,000 affected rail workers had rejected. Meanwhile, eight other Democrats as well as several high-profile Republicans refused. Among the progressives, only Rep. Rashida Tlaib and Sen. Bernie Sanders had the good sense to vote “No” on the rotten contract.

This is a culmination of years of pursuing an awful strategy of backroom deals wherein progressives have dropped their votes – and their dignity – in exchange for exactly nothing.  While the Squad’s gradual capitulation to the party establishment has been on display for years, and has intensified since Biden took office, this is by far the most abominable betrayal to date.

A Socialist Can’t Be A Strikebreaker

The wave of left-wing radicalization over the past decade, and throughout the Trump years in particular, raised the aspirations of millions of workers and young people as a new opening for socialist ideas in politics emerged after decades of neoliberal hegemony. This phenomenon brought Kshama Sawant’s election in 2013 to the Seattle City Council, Bernie’s transformative 2016 presidential campaign, and explosive growth for the Democratic Socialists of America (DSA) – of which AOC, Tlaib, Bowman, and Bush are all members whose victories DSA fought hard for.

In the midst of this, a group of young political insurgents and trailblazing people of color who pulled off upset primary victories against establishment politicians entered the scene in the House. The “Squad” moniker, coined by AOC in a 2018 Instagram post, echoed through political discourse as a symbol of a new, fighting force in Congress that could push back against both Trump and the corporate Democrats. To say the Squad has fallen short of these expectations would be an understatement at this point.

It’s devastating to think of the missed opportunities where the Squad could have had an impact in delivering meaningful progressive change to working people. Since 2021, the Squad has held enough of a balance of power in the Democratic caucus to demand crucial measures. They have not done this once. Instead, they rejected calls to Force the Vote on Medicare for All which would have meant crossing Nancy Pelosi. Fighting to include a $15/hr minimum wage in Biden’s stimulus package wasn’t worth ruffling feathers. They went along with House Democrats in caving on Build Back Better. At any point, the Squad could have broken with the phony ‘Progressive Caucus’ by challenging the right wing’s reactionary “America First” rhetoric on the war in Ukraine by instead putting forward a left-wing anti-war platform, based in solidarity with working people across borders and principled opposition to imperialist warmongering.

At the very least, when the full forces of big business were bearing down to impose an inhumane contract on rail workers, the Squad of “democratic socialists” could have stood on the side of workers in the most basic of ways by voting “No” on the TA. Instead, they chose to back down as they have time and time again.

If that wasn’t damning enough, the details revealed in the following days painted an even worse picture. Not only did progressives fail to fiercely condemn Biden’s role in throwing workers under the bus, but they colluded with the establishment to provide cover. It was Jamaal Bowman, with the help of Pramila Jayapal, who wasted time orchestrating a dead-on-arrival vote to provide shield the party from criticism.

Every excuse in the book has been rolled out. “Some union workers asked representatives to vote Yes.” A clear majority of voting union members had already directly rejected the contract. “Progressives didn’t have enough time to plan their approach to the strikebreaking bill.” The contract battle had been building for a year and the Biden administration’s plans to intervene by the December strike deadline had been on the table for months. “They wanted to give the separate sick days measure a fighting chance in the Senate.” It never had a chance in the Senate. In this instance, as in any battle against the bosses, the best fighting chance for workers to win their demands is to go on strike.

It’s easy to get lost in the specifics of the process of this betrayal. But it’s fundamentally not a question of which tactics they used to crush the strike, what we need to evaluate are the principles that underpinned their entire approach. Their strategy flowed from a fatalistic attitude that Congress coming in to crush the strike was an inevitability, something they had no business even trying to prevent. So rather than taking the principled, socialist stance of using every tool at their disposal – including calling on the rail workers to organize mass demonstrations outside Congress leading up to the vote – they played by the rules set by the bosses.

A 2021 interview with DSA’s official publication Democratic Left describes AOC as the organization’s “foremost socialist superstar.” From Jamaal Bowman’s vote to fund the Iron Dome that led to DSA’s leadership censoring its BDS working group, to the mounting number of betrayals by DSA politicians at the state and local level, it could not be any clearer that the strategy of using the Democratic Party ballot line as a shortcut to socialist change is completely impractical. When we send socialists to the halls of power to fight, but get them there by shackling them to the Democratic Party, we’re cheating ourselves. It doesn’t take much time at all before any semblance of left-wing politics is dissolved into the prevailing aims of the party establishment.

How enraging this is for rail workers, whose ability to take time off to see a doctor or visit a sick loved one has been robbed, in part, by the country’s biggest advocates for Medicare for All. How demoralizing this is for workers and youth on the left, including the thousands who knocked doors and donated to their campaigns, to be insulted in this way. And what poison it is for socialist ideas to send the message that “democratic socialist” politics are essentially a hoax that involves tweeting about the rights of workers only to pull the same underhanded tricks as the corporate establishment to undercut them.

Just as the news was breaking that the House would be sending the TA to the Senate alongside a doomed sick leave vote, Marco Rubio tweeted, “The railways & workers should go back & negotiate a deal that the workers, not just the union bosses, will accept. But if Congress is forced to do it, I will not vote to impose a deal that doesn’t have the support of the rail workers.”

It would be foolish to take Republicans at their word: this is the party of merciless destruction of public sector unions, tax cuts for the billionaires, and right-to-work legislation that’s resulted in a devastating setback for union rights. Furthermore, the right-wing’s relentless focus on attacking reproductive rights and queer and trans people serves absolutely no benefit for working class people. These divide-and-conquer offensives fragment working people as a class, deteriorate our living conditions, and restrict our basic personal freedoms – they make our lives worse. Instead of pointing out the obvious hypocrisy of Rubio and the Republicans, AOC replied to Rubio’s tweet that she was “glad we are on the same page.” The problem with this is that between the two, only one voted for the TA that workers rejected. The optics could not be worse.

Alas, the likes of Rubio, Ted Cruz, Josh Hawley, and Lindsey Graham were able to win brownie points through performative opposition to Biden’s betrayal, and all because progressives opened the door for them. Betrayed by Biden and the Democrats, many working-class people are moving toward Republicans and the right. We can be sure that all the ways the Squad could have organized as a bloc within the Democratic majority, but didn’t, the right-wing Freedom Caucus will surely take advantage of with their balance of power in a Republican-dominated House.

Biden’s betrayal will have a profound impact on union workers’ perception of who they can trust to protect the interests of working people. We have to fight to prevent the right-wing capture of disaffected workers, but that raises a core problem. Where does the working class go politically?

In the words of Financial Times columnist Edward Luce, “One party is dangerous. The other does not really seem to mean what it says. America is ripe for a third party — and a fourth. Maybe one day U.S. democracy will offer a better choice.” While Luce accurately characterizes the political rock-and-a-hard-place scenario facing “America’s shipwrecked working class,” U.S. democracy is not going to offer anything.

Elites in Congress, with six-figure salaries and unlimited sick days, have collectively screwed over the people who keep the economy running. What working people truly need is not another corporate machine wrapped up in partisan rhetoric and disingenuous lip service. We need to take the question of political leadership into our own hands. The left needs to stop making excuses for its fairweather friends in Congress and focus its efforts on building a militant, worker-driven labor movement strong enough to sustain a winning wildcat strike in the event the billionaires and politicians dare to try to snatch away workers’ power again. And crucially, we need to fight for a working-class political alternative to the Democrats and Republicans – a new party that can provide a home to the labor movement, social movements, and the struggles of young people.