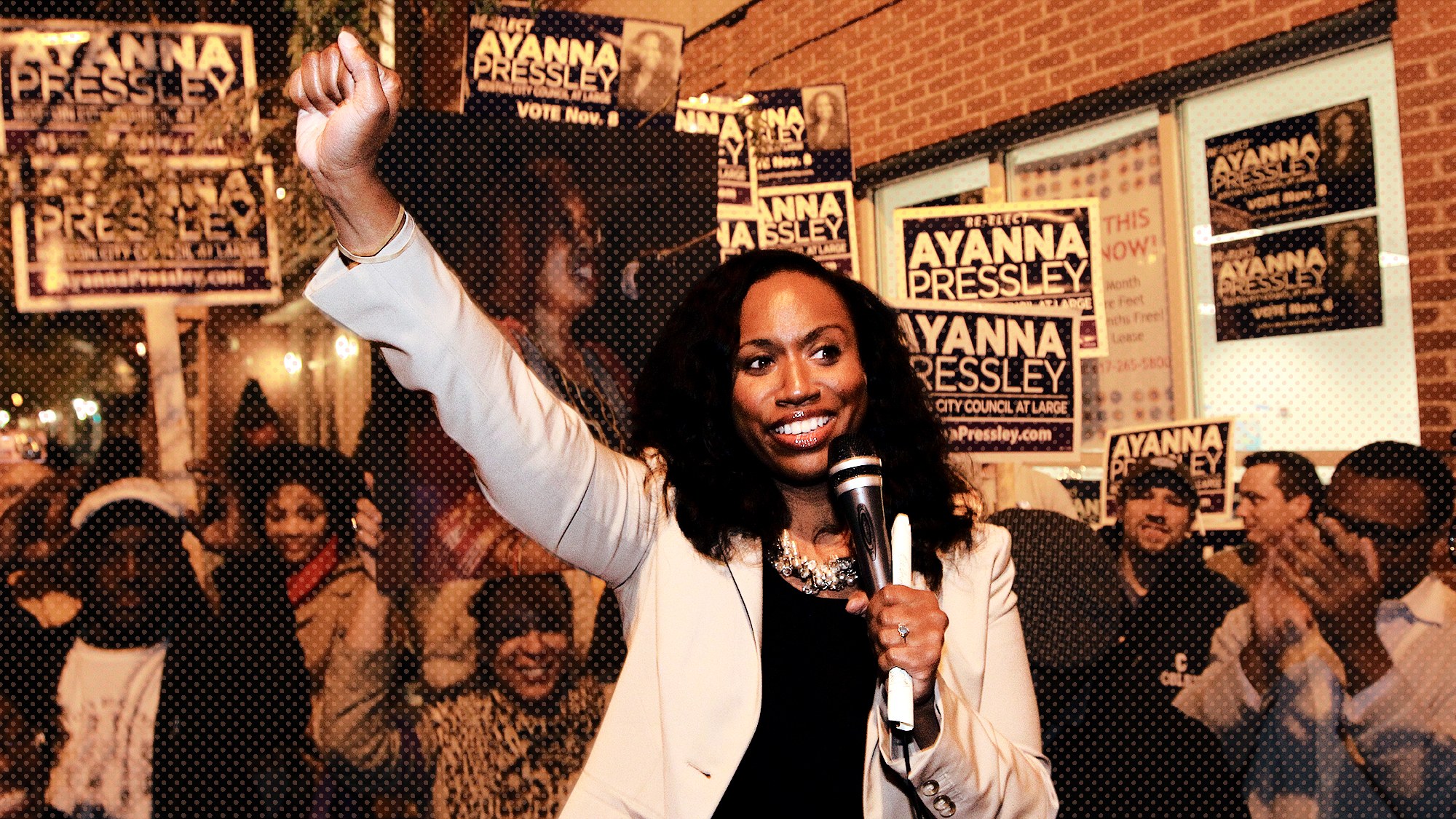 On September 4, Ayanna Pressley beat out ten-term incumbent Mike Capuano in the Democratic primary for Congress in a district covering much of Boston and other nearby cities. Pressley, the first Black woman on the Boston City Council, is now set to also become the first Black woman elected to Congress from Massachusetts. Her victory is seen by many as part of a “progressive wave” within the Democratic Party of newer, self-identifying progressive Democrats fighting to oust establishment incumbents.

Pressley’s platform is similar to many Democratic candidates running as progressives in primaries across the country against establishment incumbents. She calls for Medicare for All, paid family leave, a $15 federal minimum wage, for the U.S. to be run on 100% renewable energy by 2035, abolishing ICE, and the cancellation of student debt (although only debt-free public college as opposed to fully tuition-free public college). However, her platform doesn’t go as far as Alexandria-Ocasio Cortez’s and, notably, she does not call herself a socialist.

Bostonians and many others across the country who want to see the corporate Democratic leadership replaced and the Democratic Party turned into a more progressive “people’s party” are excited about Pressley’s victory. Despite her platform being by and large similar to her opponent’s, Pressley identified herself with the “progressive wave” in the Democratic Party and is seen overall as new blood, taking over for a ten-term incumbent. Pressley has garnered excitement by repeatedly claiming that she intends to bring “activist leadership” to Washington, in contrast to her opponent who has pointed to his relationships and connections as his strategy for change.

These are all important things and show the strong and widespread mood that exists simply for something new. However, alone they do not guarantee Pressley will become a force for progressive and left-wing change once in Congress. It is a sign of the times that the first Black woman is being elected to Congress from Massachusetts, reflecting the progressive desire of millions to fight racism and sexism. But the question is: will Ayanna Pressley be prepared to help build an unwavering movement to win Medicare for All, a federal $15 an hour minimum wage, free public college, union rights, and more in order to improve to living conditions for the majority of black and latino workers?

A candidate’s race, gender, sexual orientation, or nationality does not automatically translate into gains for oppressed communities. We certainly believe that increasing the diversity of public representatives is a positive goal. But in assessing someone standing for office as socialists we focus even more on their platform, their record, and their strategy for winning gains for working people and the oppressed.

When asked in a debate about the similarities between Pressley’s and her opponent’s platform, she responded, “We will vote the same way, but I will lead differently.” Repeatedly, Pressley promised to bring “bold activist leadership to Washington.”

Throughout her campaign, Pressley stressed her commitment to women’s rights including fighting the epidemic of sexual violence and protecting a woman’s right to an abortion. With the looming threat of Brett Kavanaugh’s appointment to the Supreme Court, a great first step for Pressley to take as an activist leader would be to call for mass meetings in Boston to bring ordinary people together to discuss a strategy for building a mass movement to stop the anti-abortion Kavanaugh’s appointment. Thousands would respond to this call. Doing this would not only show she is serious about her promise of activist leadership but it would provide a lead to elected officials and those who are a part of the “progressive wave” as to what genuine progressive leadership looks like. Socialist Alternative is calling on Ocasio-Cortez and Julia Salazar in New York to do similar things.

Pressley bringing activist leadership to Washington would be new for her, as throughout her five terms on the Boston City Council she didn’t exhibit much along these lines. During the height of the Black Lives Matter movement against police brutality in 2014 and 2015, Pressley did not play a role in mobilizing for protests or helping to give the burgeoning movement a clear voice in the halls of power, fighting for things like democratically elected civilian review boards with full power over the police. While she did vote against the severely underfunded 2016 Boston Public Schools budget, she didn’t help publicize, build for, or attend the multiple student walkouts and other protests that were the driving force behind the Mayor eventually lessening the cuts. When Trump passed the infamous Muslim Ban, even Mayor Marty Walsh attended the airport protests, but Pressley was absent. While Walsh did this one-time action more to gain progressive cred than to mount a strong ongoing movement against the Ban, which is what activist leadership would really entail, the fact that Pressley was absent from struggles like this is concerning and should be noted.

Pressley moving in the direction of activist leadership would be extremely welcome, but to do so she needs to be prepared to resist the immense pressures from the Democratic Party establishment that will be pushing her in the exact opposite direction, to back down and “play nice.” No matter her quality of character or strength of resolve, Pressley alone will not be able to fend off those pressures.

The only force that can hold Pressley or any other self-identifying progressive elected officials accountable to their platform is an organized movement with the stated purpose of doing so. We need to put demands on our elected officials, such as using their positions of authority to call for demonstrations around stopping Kavanaugh’s appointment, winning Medicare for All, stopping deportations, or for moving to 100% renewable energy to fight off fossil fuel companies and the climate crisis.

While we should fight to keep progressive Democrats accountable to their platform through organized pressure, we should also have our sights set on the formation of a political party that is entirely progressive, not just a wing of it facing down a big-business establishment at every turn. A whole party that doesn’t take corporate cash, has a democratically decided upon program, candidates that are mandated to fight for that program, structures that can hold them accountable, and a party that doesn’t just limit itself to running in elections but also builds movements on the ground and is united with the labor movement.

Pressley’s victory is a positive indicator of the emerging anti-corporate and anti-establishment sentiment among millions of people across the country, but to win her platform will take more than what just a handful of Congresspeople can achieve on their own. It will require taking on the political establishment as a whole and some of the biggest corporations in the country and indeed, around the world. It will require taking on the political establishment of both major parties which are bought off by those corporations, and building mass movements and the labor movement. And ultimately, it will be necessary to challenge the for-profit system of capitalism itself which is the source of the inequality, oppression, and environmental destruction we are fighting to stop.