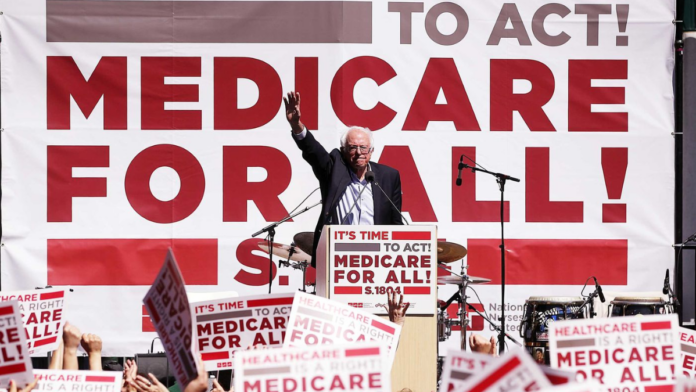 For the American working class, navigating the for-profit maze of insurers, providers, pharmacies, and clinics is enough to make you sick. The promise that he’d fight for Medicare for All was one of the key things that drew millions of people into Bernie Sanders’ campaigns in 2016 and 2020.

Setting aside the life and death consequences of being denied essential care, something that happens for one out of every five claims for those covered under the Affordable Care Act Marketplace, the basic task of finding and visiting a doctor in the U.S. can be so prohibitively costly – both financially and in terms of stress – that many Americans just forego care altogether. This summer it was reported that four in every ten Americans have delayed or gone without medical care in the last year due to cost.

A universal, high-quality healthcare system seems like a no-brainer and is widely accepted. In 2020, 69% of voters supported Medicare for All. And this was only one month into the pandemic which exposed the deep rot at the core of our existing for-profit system. Despite popular support, corporate politicians of both parties agree and have consistently attacked, blocked, and ignored proposals for Medicare for All.

So why is it that after two and a half years of a health care crisis, and with a Democratic majority in D.C., Bernie and other progressives have dropped any real struggle for Medicare for All?

The answer, sadly, is simple: they are protecting Joe Biden and the Democratic establishment. They know that fighting for Medicare for All, or any host of other progressive measures, would require a struggle against the leaders of their own party who are tied by a thousand threads to big pharma and the insurance giants.

A Timeline of Betrayals from Progressives

Two years ago, in the summer of 2020, after dropping out of the race for president, Bernie Sanders teamed up with Joe Biden to come up with a “united, bold vision” for the Democratic Party. The goal of the “Biden-Sanders Unity Task Force,” according to Bernie, was to “move the Biden campaign into as progressive a direction as possible.”

Out of this task force came a 110-page policy wish list that became the basis for Bernie’s proclamation that Joe Biden could be the next FDR.

Months before this, on March 10, 2020, just three days before lockdowns cascaded across the country, Biden signaled to the healthcare industry that he’d protect their profits and if elected, he would veto any Medicare for All legislation that reached his desk. Bernie, on the other hand, was proposing making it illegal to sell any private health insurance that covered benefits offered by a Medicare for All system.

So what did these political rivals manage to agree to in their Unity Task Force? A public option for healthcare. This was a major climbdown for Bernie Sanders, but was also an admission from Biden that the Obama-era Affordable Care Act – which the New York Times described as “the federal government’s biggest attack on economic inequality” in decades – was deeply insufficient.

While a far cry from Medicare for All, winning a public option as it was laid out in the task force’s recommendations would provide some real relief to working people. What was the price to be paid for this concession from Biden? Bernie would, going forward, only talk about Medicare for All in hushed whispers if at all. Thus, big pharma, corporate health insurance, and for-profit hospital chains breathed a sigh of relief.

This is a tragic foreshadowing of Bernie’s (and the Squad’s) approach to Biden and the Democratic establishment for the following two years.

In December 2020, shortly before Biden and the new Democratic majorities took control of D.C., a debate broke out on the left. Media personalities like Jimmy Dore and Briahna Joy Gray called on AOC and the Squad to withhold their votes to confirm Nancy Pelosi as Speaker of the House until she called a floor vote on Medicare for All.

AOC responded on Twitter by insisting the votes weren’t there to pass Medicare for All, so it’d be better to focus on things that can be won, like a $15 an hour minimum wage in Biden’s first 100 days. You see where I’m going with this.

Progressives made a fatal calculation that they could trade in their campaign for Medicare for All in exchange for victories on other fronts. They broadly stopped talking about Medicare for All, they didn’t support the grassroots marches for M4A in July 2021, and Bernie introduced his Medicare for All Act of 2022 with little more than a press release and a tweet.

The problem is that those victories never came. The public option never came. Lowering the Medicare eligibility rate never came. And neither did a $15 an hour minimum wage, a tax on the rich, a Green New Deal, universal childcare, or paid family leave.

If the starting point was Medicare for All, and the end point is that the biggest healthcare “victory” won under Biden was that starting in 2026 Medicare can directly negotiate the prices of 10 drugs, we have to evaluate why the left failed so badly.

The Biden-Bernie agreement to support a public healthcare option quickly became irrelevant after Biden took office. Rather than hold Biden’s feet to the fire on even this limited promise, Bernie and the Squad set their sights lower and lower, instead focusing on the demand to lower the Medicare eligibility rate.

Now, to be fair, lowering the eligibility rate would be a win – it would be a legitimate life saver for many Americans approaching older age. But facing no real pressure from the left, Biden put business interests first and stripped the proposal to lower Medicare eligibility from the American Families Plan.

Bernie has commented from the sidelines about all sorts of inadequacies of the Biden administration, but he’s ultimately caved on every key question. By doing so, he allows Biden to pose as a progressive, to try to hide his status as a bought-and-paid-for corporate politician.

He said he wouldn’t vote for a spending package that didn’t include Medicare expansion, but he did. He criticized the Inflation Reduction Act for being wildly inadequate on August 3, then said he was happy to vote for it on August 7. He urged Biden to delay the Medicare premiums increase in late 2021, and was then silent when Biden did nothing.

The scary thing is, AOC’s political trajectory has been far worse than Bernie’s. She started by joining sit-ins pushing for a Green New Deal, actually occupying Pelosi’s office in her first weeks. In the run up to the 2022 midterms, she’s reduced to soliciting volunteers for Rafael Warnock’s re-election campaign. What does Warnock have to say about Medicare for All? He “understands how personal decisions of health care can be, which is why he will never support efforts to take private insurance from those that want to keep it.”

This is a far cry from the progressives of the campaign trail who talked a big game about moving Biden to the left.

The Logical Conclusion of Captivity in the Democratic Party

Bernie introduced Medicare for All legislation in the Senate in May. He did it with a press release, a few tweets, an op-ed, and a budget committee hearing. In an email to his supporters, Bernie wrote: “We can win this struggle if we engage people in the political process in an unprecedented way.”

I agree with him on this. Medicare for All could be won – but only on the basis of a massive political fight waged outside the halls of power – which are thoroughly dominated by big business. But Bernie knows as well as I do that the primary target of such a movement would be the party in power, which right now is the Democrats. Calling a march for Medicare for All would mean marching to the steps of Biden’s White House, or Schumer’s Congress.

Bernie’s loyalty pact with the Democratic leadership is based on the distorted logic that the best way to fight the right is by lining up behind the political center. But if that were the case, why is the end result a scenario where Republicans are set to control the House? Why is it that Trump could very likely run (and win) in 2024?

The Democrats have shown time and again they’re not capable of stopping the growth of the right. The only way we can do that is by building a strong, working-class, left alternative to the Democratic Party that takes zero money from corporations and billionaires.

In 2016 and 2020, Socialist Alternative called on Bernie Sanders to break from the Democratic Party and begin constructing this alternative. If he’d done that, millions would’ve followed him. We could’ve built a political home for the millions of Americans who support Medicare for All, who support taxing the rich, who support a Green New Deal.

Bernie has so far rejected this task, and it’s likely he’ll continue to do so. But building a working-class political force outside both corporate parties remains one of the most important projects for working people in the U.S.

We can begin to lay the groundwork for this here and now. We can take the fight to our unions, demanding that they end the practice of writing blank checks to Democratic Party politicians using union dues. We can campaign within our youth or community organizations, demanding a clear stance of political independence from the Democrats. We can run independent candidates for political office in cities across the country.

It’s only on this basis of a divorce with the Democrats that we can launch a struggle to win Medicare for All, and beyond that – to win a better world.