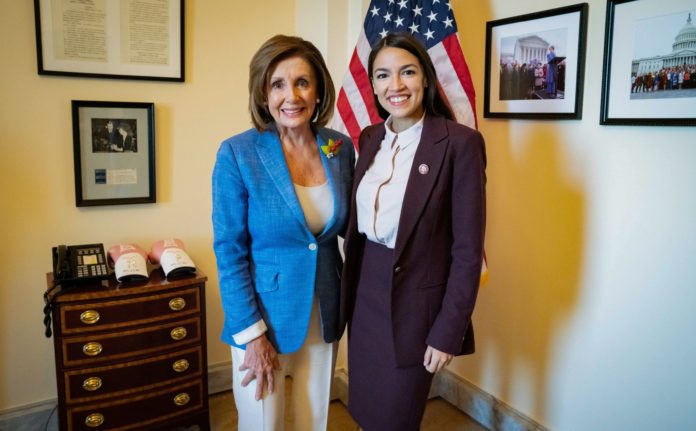 With Democratic Party hopes for a bigger majority in the House dashed by a combination of anti-Trump voters who went with Republicans down ticket and 71 million Trump voters, it didn’t take long for the fireworks in the Democratic House caucus to start going off.

On a post-mortem conference call the Thursday after election day, conservative Democrat Abigail Spanberger unleashed a profanity-laced attack on the deadweight dragging down the party: “socialism” within the Democratic party which she alleges turned mainstream voters off from Democratic candidates. This was a thinly veiled attack on the progressives in the House who support Medicare For All, the Green New Deal, and other policies that are broadly popular with working people and youth.

Progressive congresswoman Alexandria Ocasio-Cortez is leading the left wing of the Democrats in fighting back against the idea that the U.S. electorate is too conservative for the pro-worker program that Bernie Sanders popularized in his presidential campaigns. In the battle that has continued on Twitter and in the pages of the New York Times, AOC and other progressives have argued that it was actually right-leaning Democratic candidates in swing districts who were a liability in the voting booths. Unlike Spanberger, AOC brought receipts: an analysis from Justice Democrats and Sunrise showed that progressive candidates got more vote share than conservative Democrats. In every swing district where a Democrat who supported Medicare For All was running, that candidate won; at least seven right-leaning Democrats in swing districts lost.

Battle in the House

With a smaller House majority for the Democrats and more new progressive House members, the debate between progressives and establishment Democrats is set to intensify. All of the members of “The Squad,” AOC, Rashida Tlaib, Ayanna Presley, and Ilhan Omar were reelected. They will be joined in Washington next year by Justice Democrats candidates Jamaal Bowman of New York, Cori Bush of Missouri, and Marie Newman of Illinois, all of whom prevailed in the primaries against longtime incumbents who were solidly in the mainstream of the Democratic establishment. Notably, Cori Bush, a longtime community activist, was a leader in the protests against the police murder of Michael Brown in Ferguson, Missouri in 2014.

As of this writing, it appears the Democrats’ majority will be in the vicinity of nine seats. With such a slim majority, it should be far easier for House progressives to organize together and insist that their priorities get into legislation.

This won’t be an easy fight, and the progressives will need to organize in a determined way to see their priorities reflected in legislation. An instructive example was the Heroes Act, the second stimulus package that was passed in the House in May, but was doomed in the Republican-dominated senate. Even in this largely symbolic bill, the House leadership refused to add progressive priorities like a paycheck guarantee to avoid pushing workers onto unemployment, and free healthcare for the duration of the pandemic. Without any serious effort to win mass support for their initiatives, the progressive forces disintegrated and the bill passed easily without their additions. However, with a nine seat majority going forward, the progressives should have every opportunity to force the establishment to negotiate with them.

And unfortunately, they’ve already missed one opportunity to launch a struggle against the establishment by refraining from standing one of their own against Nancy Pelosi for Speaker of the House. They should have used the debate in the House around nominations to leverage their increased numbers, and it doesn’t seem that they’ve done that in any real way — though it remains to be seen if they will vote for her when the vote goes to the full House.

Standing up to the House leadership will not be easy. AOC was clear about the price that is paid for any opposition to the Democratic establishment’s policies in an interview in the New York Times (11/7/2020): “Externally, there’s been a ton of support, but internally, it’s been extremely hostile to anything that even smells progressive.”

The Establishment is Your Enemy

Back in January, AOC actually went some distance toward diagnosing the real problem for progressives fighting for pro-worker measures from within the Democratic Party when she said that in any other country she and Joe Biden wouldn’t be in the same party.

The Democratic Party may be a big tent electorally, but at its highest levels, it is dominated by politicians who are tied by a thousand threads to the corporations and the billionaire class. It should be no surprise that Bernie Sanders’ presidential runs and the immense support he generated with his program of taxing the rich to pay for healthcare, student debt relief, and more, was ferociously opposed by the Democratic establishment.

On this question, Socialist Alternative would argue that establishment Democrats actually have it right. They are our enemy and it is not alienating to admit this. There are millions of working people, people of color, activists and progressives who are part of the Democratic base and millions more who have given up on politics, who correctly regard the corporations and their agents in congress as the enemy.

That AOC has been at the receiving end of so much hostility from within her own party that she has contemplated quitting politics is evidence of the two diametrically opposed forces within the Democratic Party: ordinary working people who are angry at being left behind as capitalism has created more and more extreme income inequality, and the politicians who are the direct representatives of the billionaires who have become grotesquely wealthy at workers’ expense.

However, we think it would be a huge mistake for AOC or other members of The Squad to succumb to demoralization and leave politics just as support for their ideas is growing. The strategy AOC, as well as Bernie Sanders, have been pursuing up to this point — of leveraging their assistance with campaigns in hopes of winning support from the establishment — is a completely failed strategy. AOC admits as much when she says: “I’ve been begging the party to let me help them for two years. And every single one that rejected my help is losing. And now they’re blaming us for their loss.”

The Squad Needs to Build a Movement

What will ease the very real loneliness of standing up for progressive ideas in Washington is the “external support” that AOC has pointed to. There are tens of millions of working people who deeply desire real change toward progressive policies. What is missing is a vehicle through which a mass movement could effectively fight the billionaire class.

The Democratic Party establishment has shown again and again that it is determined to smother any embers of dissent within the Party. If AOC and The Squad are to play a progressive role in history serving the interests of the masses of working and oppressed people, they will have to abandon both the idea that there can be unity between the progressives and the corporate forces within the Democratic Party, and ultimately the discredited Democratic Party itself.

The two Bernie Sanders candidacies — which were both sabotaged and blocked by the establishment — make it more than clear that the road to winning policies like Medicare for All and a Green New Deal will not pass through the Democratic Party establishment. It will require a tremendous social movement — even beyond the scale of the social movements in the 1960s and 70s — that threatens to grind society to a halt, as well as political independence for the working class, to win these crucially necessary reforms.

Concretely, there are two major steps that AOC and The Squad need to take to win Medicare for All: first, turn to a mass movement strategy. This will require building grassroots struggle and organization to fight for progressive policies. Bringing existing social movements like Black Lives Matter as well as progressive unions on board will be a huge asset in this fight. The second thing The Squad will need to urgently do is build a new political party that is independent of the capitalist class. A party that is accountable to the social movements and unions described above. Building a new party for the working class is the logical conclusion of all the hostility AOC describes experiencing within the Democratic Party. Addressing the hostility means leaving the party, not begging the establishment to be your friend.

Trump may be on his way out of the White House, but the factors that drove the rise of Trump will not disappear under a Biden presidency. Without the development of a powerful left wing movement, the Democratic Party establishment will succeed in isolating the Squad, and will simultaneously push millions of working and oppressed people to walk away from politics. There will also be some working people, desperate for change, who will look to the now consolidated, right populist Republican Party.