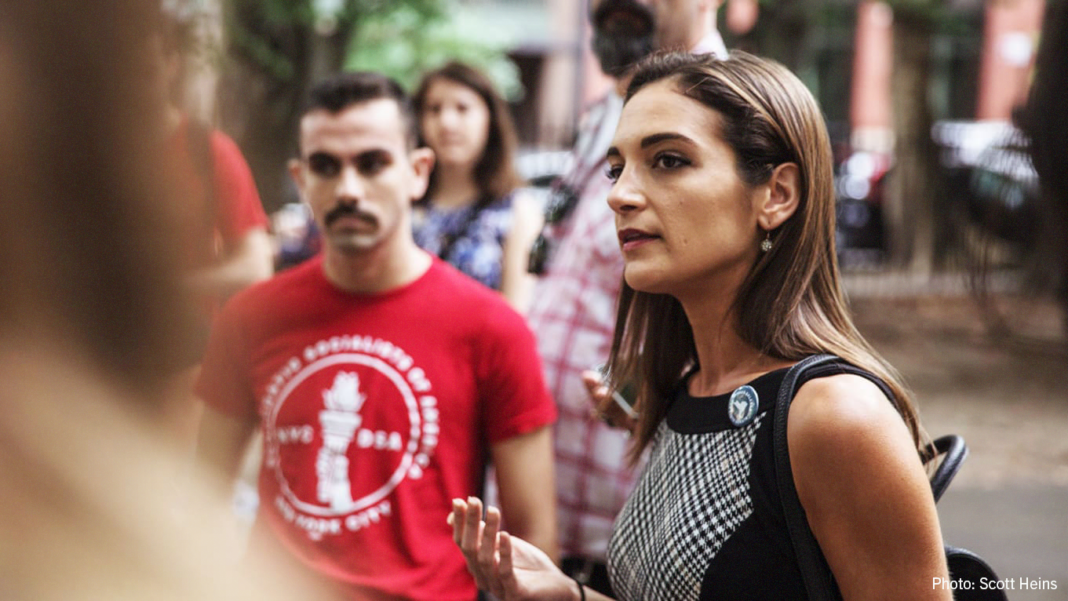 NY State Senator Julia Salazar has come under fire from Democratic Socialists of America (DSA), the organization she’s a member of and affiliates with as an endorsed elected representative, for supporting a housing bill that is, in reality, a trojan horse for privatization. The bill, New York City Housing Authority (NYCHA) “Blueprint for Change,” is backed by law-and-order mayor Eric Adams.

Salazar has campaigned as a pro-working class legislator and democratic socialist since 2019, with housing and tenant advocacy as key elements of her platform. She sports endorsements from prominent housing non-profits and has worked closely with organizations like Housing Justice 4 All and MetCouncil through the pandemic to sponsor the Rent/Mortgage Cancellation Act and Good Cause eviction legislation, and promote other housing bills.

After agreeing to remain neutral on “Blueprint” until NYC DSA had the opportunity to discuss the best course of action, Salazar emerged in the middle of the night as the bill’s lead sponsor. This is scandalous; however, it is not an anomaly that Salazar has caved to the pressures of establishment politics. As Socialist Alternative member and Seattle City Councilmember Kshama Sawant warned in a letter to Julia Salazar following her election in 2018: “You will, of course, face enormous pressures to instead adapt to the establishment. You will be told to set aside your bold demands, and instead focus on ‘winnable’ things acceptable to big business.”

A first iteration of this bill was defeated last year after an uproar from NYCHA tenants. In March 2021, protestors rallied outside the NYCHA offices demanding “Blueprint” get thrown out. One protestor said: “Keep public housing public and stop making developers richer! It is shameful in a pandemic that NYCHA is pushing their Blueprint plan. We are sick and tired of their privatization schemes.”

A year later, NYCHA has returned with a new iteration of the bill, NYCHA Trust, with Julia Salazar as its lead sponsor. Nearly identical to the previous version, it transfers tens of thousands of NYCHA units out of “Section 9” public housing and into “Section 8” where they become managed by a Trust. The Trust is backed by private investors who, if it goes into default, then assume control of managing what is their “asset” — people’s homes.

The bill’s sponsors cite desperately needed repairs and a lack of funding as key reasons for the legislation. Its supporters include NYC’s new Mayor Eric Adams, an austerity-hungry, big business and corporate landlord-backed politician who has no interest in the wellbeing of NYCHA residents or the preservation of public housing. Adams has cynically leveraged populist rhetoric to place the blame for the crisis facing New York’s public housing at the feet of the federal government. In reality, NYCHA has intentionally allowed the housing to fall into disrepair over the course of decades as a pretext to handing it over to private developers, who are eager to get their hands on lucrative NYCHA properties as rents in the city soar.

As the Trust’s lead sponsor, Salazar has defended her position on the grounds that it “allows public housing residents to democratically decide” whether they want to be part of the Trust on a building-by-building basis. But what choice do they even have? If this plan is the only thing NYCHA can come up with to carry out desperately needed repairs, what kind of choice is that? Under the capitalist system, where the balance of power favors the interests of corporations over the working class and poor, this “public option” is not democratic at all. In reality, as with any “compromise” between big business and public interests, this legislation lays the groundwork for private corporations to have increasing say in the fate of NYCHA properties, ultimately paving the way for privatization — all at a time when affordable, safe public housing is more urgently-needed than ever.

Salazar’s backroom deals are a betrayal of DSA’s politics and, crucially and much more broadly, NYCHA residents themselves.

NYCHA housing advocates, including many DSA members, have formed a petition calling on Salazar to retract the legislation, which Socialist Alternative caucus members have signed onto in support.

Salazar’s position on NYCHA Trust is clearly a capitulation to this pressure, and it’s a very valuable capitulation as it gives progressive credibility to the scheme. As the petition states, “Salazar’s actions in this incident have harmed NYC-DSA’s reputation” and created a crisis for DSA, including pushing some members of the NYCHA working group to leave altogether.

Socialists in office face incredible pressure to bend to the will of big business and the politicians in their pockets. The Democratic Party is governing over an absolute crisis situation that they have no way out of. This means that the pressure is mounting on the party’s progressives to placate rather than activate their supporters around the bad deals that the political establishment is prepared to hand out.

However, this crisis of accountability is far from the only or even the largest that DSA electeds have recently faced: Jamaal Bowman’s vote for the Iron Dome bill also represents a capitulation to establishment interests, as well as Chicago Alderman Andre Vasquez’s vote for an austerity budget, and AOC and Bernie Sanders’s votes for $40 billion in military aid to Ukraine. As these betrayals pile up and DSA fails to take firm action—as DSA leadership did when declining to expel or censure Bowman despite a widespread campaign from below, instead cracking down on internal dissent—this only encourages the pattern to continue of “democratic socialists” moving to the right. This not only damages the political credibility of the largest socialist organization in the U.S., but impacts the millions of working-class people who DSA-affiliated elected officials represent.

The petition states that retracting the NYCHA Trust bill “is the only way we can restore a more democratic and robust process, and instill accountability from our elected officials on this matter.”

Retracting the harmful bill was of course a step Salazar could have immediately taken. But that alone, given the grave nature of her initial decision to sponsor and the consequences that will follow it now having passed the legislature, does not provide any strategy to ensure that this type of capitulation is not repeated and made worse. Clearly, the current accountability structures are not enough. Despite agreements reached at coalition meetings and the Socialists In Office caucus, which is intended to bind together DSA-endorsed politicians in NYC and NY State, Salazar still made this executive decision behind closed doors.

It is only by starting with the logic of dual loyalty to the Democratic Party machine and working people — forces whose interests are diametrically opposed — that Salazar could come to the outrageous conclusion that legislation supported by Mayor Adams, CEOs, and developers could ever serve anything but injustice to public housing residents.

Genuine socialist leadership in this context would put forward a full-throated campaign for taxing the rich and corporations to build quality social housing, with fierce opposition to loopholes and stealthy privatization. Socialists, housing activists, NYCHA tenants, and DSA will need to build a movement to stop the Trust from being implemented, as with the previous Blueprint plan. While Salazar should continue to be petitioned to reverse her support for the bill and to take a stand against it taking effect, this movement must be prepared to fight with or without her as an ally.

The unfortunate reality is that so long as progressive elected officials like Salazar continue to work within the Democratic Party, more capitulations of this nature are their inevitable trajectory.

Reliance on the Democratic Party structures is a fatal weakness for socialists in office. Once elected, all the party’s benefits become bargaining chips, used to hold progressives to the establishment line and ensure the balance of power in favor of corporate interests is never seriously challenged.

The Democrats have demonstrated again and again their fundamental unwillingness to fight for working people, from a minimum wage increase to protecting abortion rights, and as a result their support nationally is reaching severe lows coming into the midterm elections.

Socialists looking to contend for political power are increasingly drawing the conclusion that there is no path forward inside of the Democratic Party — but this can dangerously lead to demoralization instead of clarity that independence from both parties of Wall Street is possible and necessary. Moves such as Salazar’s NYCHA Trust bill only serve to propel disillusionment and distrust in progressives. We need to look elsewhere for inspiration that it’s possible to have an independent socialist advocate in office.

Genuine Accountability is Possible with an Independent Alternative

In a recent article for Current Affairs titled “The Left is Losing Because We’re Not Confrontational Enough,” writer Jordan Bollag gets to the crux of the failing trajectory of progressives nationwide under Democratic leadership — an analysis Socialist Alternative has consistently put forward.

“The electoral left is losing because it is pursuing the hopeless strategy of confining itself to indoor, backroom deal negotiations while remaining friendly and accommodating to the Democratic establishment in public. Progressives in D.C. are losing because they refuse to strongly and persistently call out the corruption of their Democratic colleagues, they refuse to draw red lines for their votes (and stick to them), and most importantly, they refuse to mobilize their base.”

Independent Seattle city councilmember and Socialist Alternative member Kshama Sawant bases her office on the pillars Bollag outlined, a basis upon which her office has won the country’s first $15 min wage, the Amazon Tax, a strong slate of renters rights reforms, and more. Facing no pressure to adhere to the Democrats’ party line, she is free to clearly name the enemy even when her Democratic colleagues do not, and uses her office to build powerful movements that force the rest of the Democratic establishment to make serious concessions to working people.

Sawant’s accountability to the working class also takes the form of only receiving the average workers’ wage from her $140,000 city council salary, and donating the rest to social movements and labor struggles. She is active in and accountable to a democratic political organization, Socialist Alternative, which backs her when facing down enormous pressure and hostility from the capitalist class and their politicians.

Ultimately, accountability is not simply a question of moral fortitude and attempting to correct mistakes where made, but of concrete steps that bind elected officials to the working class and working-class organizations.

Any capitulations or betrayals by elected officials are disappointing, and serve to sow confusion and doubt often in critical moments for working class gains to be won. An alternative is possible, but we must be willing to break with the Democrats and build it!

Socialists and the War in Ukraine: A Response to the Party for Socialism and Liberation