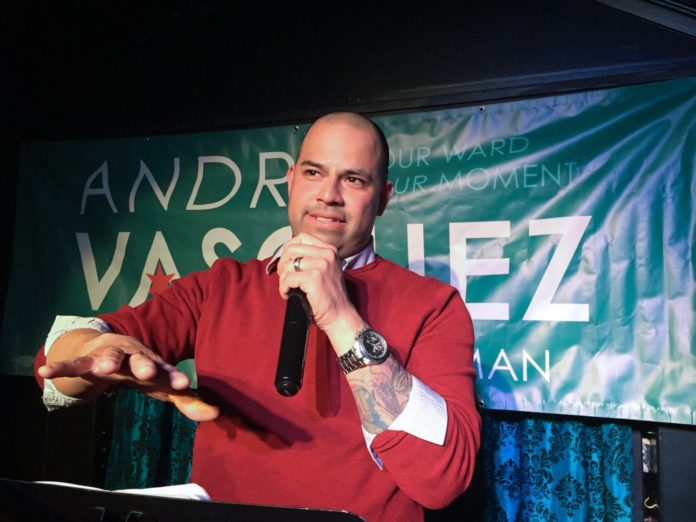 Originally published on Medium by Ryan Watson, a dual member of DSA and Socialist Alternative in Chicago.

The recent situation in Chicago raises important questions for our movement nationally – not only about holding electeds accountable, but how socialists can take on big business and the Democratic establishment.

Chicago DSA has called for Ald. Andre Vasquez to resign from the organization after he and other “progressive” city council members – backed by the Chicago Federation of Labor – voted for Mayor Lori Lightfoot’s austerity budget. This is a first for DSA and is so important for building a stronger socialist movement, but it’s also not enough. Vasquez should be expelled, but even this alone will not defeat the Democratic Party machine that he has snuggled up to. We need to make sure nothing like this happens in our movement again.

Vasquez’s betrayal is part of a national phenomenon of self-styled “progressive” Democrats turning their backs on movements. City Council Democrats in Minneapolis and Seattle have reversed course on promises to defund the police. DSA-supported Democrats in Seattle voted for Mayor Durkan’s austerity budget though, unlike Vasquez, they are not DSA members. Vasquez being a DSA member only makes the betrayal even worse.

Vasquez’s justifications echo the approach of the Democratic Party in general. He congratulated himself and other “progressives” who voted yes for their “collaboration” with the mayor and the concessions he was able to win. It’s certainly important for socialist elected officials to collaborate, but not with corporate servants. They should collaborate with ordinary working people to put forward an alternative to corporate business-as-usual politics and use a movement-building approach to stop attacks and win real victories.

Unfortunately, labor leaders in the Chicago Federation of Labor also played a rotten role, giving progressive cover to Vasquez’s betrayal. In return for minor concessions from Lightfoot – funded through unsustainable financial schemes rather than taxes on the rich – CFL leaders attacked the aldermen who voted “no” and they supported the austerity budget, even if it meant regressive taxes on their own members.

Even union leaders like Jesse Sharkey, the President of the CTU, which has a tradition of militant strikes, are falling into the trap of Democratic Party “politics as usual” at the state level. Sharkey signed a letter with other labor leaders declaring a “partnership” defending the corrupt Mike Madigan as his speakership of the Illinois House of Representatives if challenged. Madigan, who was elected in 1983 and who is notorious for his mob-like methods, led the fight in 2013 to cut pensions and laid the ground for the right-wing Republican assault on public-sector unions led by former Governor Bruce Rauner. Whether or not Madigan is re-elected as speaker, the Democratic establishment has promised to implement austerity after they failed to win the Fair Tax referendum. Propping up Madigan undermines our movements’ ability to clearly and authoritatively fight back against attacks from the corporate Democratic establishment.

With the statement Tuesday, Chicago DSA has declared that gone are the days when socialist or left-wing elected officials can betray our movement and we will just stand by and let it happen. Socialists should also stand up to labor leadership when they curry favors from the establishment at the expense of working people and their memberships, like what Eugene Debs did over a hundred years ago.

But just asking Ald. Vasquez to resign is not enough. Vasquez should be expelled and we should open up a discussion in our chapter, and DSA nationally, about how to make sure something like this doesn’t happen again. We do not want the DSA to be an endorsement machine with our army of phone bankers that serves the careers of politicians – which is how many career politicians cynically view DSA.

As a starting point, we should be clear in DSA that our elected members must be held to a high standard. This is what the socialist movement demands of its leaders and nothing less. Any DSA member who holds elected office and votes for an austerity budget like this one should be expelled. Any DSA member who, either in a campaign for elected office, or once elected and in office, takes corporate money should be expelled. DSA should oppose its members who hold elected office endorsing corporate Democrats either in their own races or for intra-party positions. DSA members in elected office accepting only the average workers’ wage as their salary, and donating the rest back to the movement, would also help hold them accountable to our overall program and mission.

If rules like this were already in place, we wouldn’t be in this situation in the first place. At best, Vasquez would have been deterred from taking the corporate money after winning office because of these rules and therefore might not have been swayed by corporate interests to vote for the Mayor’s budget. At worst when he did take the corporate cash, and in doing so crossing the class line, he would have been expelled and we wouldn’t be in a position now where a DSA member is seen as carrying out the anti-worker agenda of the Democratic establishment.

Vasquez’s betrayal doesn’t come out of the blue. His endorsement was always controversial – he was challenged by another DSA member in the ward, Ugo Okere, who – despite also running as a Democrat – promised to run a more openly socialist campaign than Vasquez. Unfortunately, after Okere lost in the first round, some people ignored warning signs in an effort to get the highest number of “socialists” elected to City Hall. But as this episode has shown, quality matters too, not just quantity.

I’m a member of Socialist Alternative and as of recently DSA too. In Seattle, socialist city councilmember and SA member Kshama Sawant has had to go head to head with corporations like Amazon and the Democratic establishment every day since she was first elected in 2013 in order to stay true to the working class. Now billionaires and the right wing (no doubt with the behind-the-scenes support from corporate Democrats) are trying to recall her for her leadership role in Black Lives Matter and other ridiculous claims just one year after she was re-elected (again).

The flip side of holding our elected leaders to a high standard is that when they do stay true to the movement and come under fire from the establishment for doing so, we need to have their back. This is why the socialist movement in Seattle is gearing up to go all out to defend their socialist representative on the council. We should support them in their effort and be prepared to do the same for our Alds. here when they come under attack too. We know that socialist elected officials can’t rely on the Democratic Party for support (just look at the way AOC is being treated right now), so they need us. And ultimately we’re going to need to build a new working class party if we want to really challenge the corporate establishment behind both parties.

Chicago DSA has already shown the way forward for DSA nationally with our statement on Tuesday. Now let’s finish what we started by implementing rules so nothing like this can happen again. This would be one of many important steps in building the serious movement we need to eventually beat the billionaire class once and for all.