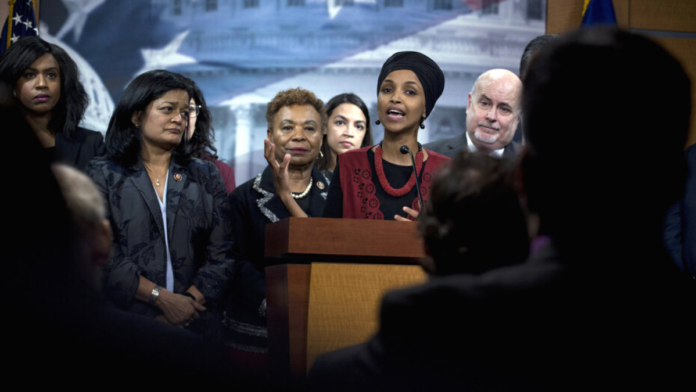 The war in Ukraine has undergone a serious escalation in the past couple of months. Ukrainian forces began their eastern counter-offensive at the beginning of September. The blowing up of the Nord Stream pipelines in September and the bombing in October of the Kerch bridge connecting Ukraine to the Crimean peninsula represent further escalations. Throughout October, Russian bombings have wreaked havoc on Ukraine’s energy infrastructure. And, throughout this period, there have been constant threats to use nuclear weapons.

Amidst this tragedy, we have also seen the farce of the response from the Congressional Progressive Caucus (CPC) in the U.S. Congress. On October 24, the CPC produced a letter, signed by 30 congressional Democrats, including the entirety of “The Squad,” making a vague call for Biden to adopt “a proactive diplomatic push, redoubling efforts to seek a realistic framework for a ceasefire.” Less than 24 hours later, Representative Pramila Jayapal (D-WA), retracted the letter on behalf of the CPC.

The letter was released without the knowledge of a number of the signatories, and Jayapal says it was “drafted several months ago, but unfortunately was released by staff without vetting.” It provoked an intense backlash from the Democratic Party establishment, accusing the signatories of aiding Putin and calling on the CPC to clean house.

The letter, and its subsequent retraction, is embarrassing. But not for the reasons the Democratic Party establishment says.

In the U.S., there has been massive understandable sympathy for the plight of ordinary people in Ukraine facing endless bombardment by Russian imperialism. This sympathy has been relentlessly manipulated by U.S. imperialism to gain support for greater intervention by NATO.

U.S. imperialism isn’t genuinely concerned with Ukrainian self-determination, but is using the Ukrainian military as a proxy in the new Cold War conflict with Russian and Chinese imperialism.

In a matter of months since the invasion, as The Intercept reported, U.S. military aid to Ukraine exceeded the combined amount sent in 2020 to Afghanistan, Israel, and Egypt, the three biggest historical recipients of U.S. aid. Throughout this, the members of the CPC have disgracefully supported every appropriation bill to finance the U.S. agenda.

The letter, for all the ire it drew from the Democratic establishment, wasn’t a criticism of the U.S.’s role in escalating the conflict. In fact the opening paragraph explicitly expressed appreciation for Biden’s appropriations of military aid for Ukraine. And they re-assured Biden of the CPC’s own status “as legislators responsible for the expenditure of tens of billions of U.S. taxpayer dollars in military assistance in the conflict.”

Rather, the letter was a plea that these tens of billions of dollars of military assistance be accompanied by “vigorous diplomatic efforts in support of a negotiated settlement and ceasefire.” This isn’t that different from Biden’s own position. Former president Obama made similar comments earlier in October without any similar blowback.

The letter represented only the most tokenistic pushback against warmongering in order to re-establish the CPC’s “progressive” credentials. Even this proved to be too much for the progressives to defend after the letter was publicized. Daily Kos founder Markos Moulitsas went so far as to accuse the CPC of “making common cause with Lauren Boebert, Marjorie Taylor Green, JD Vance, and the rest of the MAGA crowd.”

In the face of the backlash, many of the signatories rapidly distanced themselves from the letter, even before it was withdrawn. Ro Khanna (D-CA) was one of the few who stood firm and defended signing the letter, calling it “common sense.” Nonetheless, he also defended his support for military funding and declared “I will continue to support and stand with Ukraine in terms of the aid and the military they need.”

Biden and the Democratic Party establishment have a long history of propping up U.S. imperialism. Biden himself staunchly supported both the “war on drugs” in Latin America and the “War on Terror” in the Middle East. Then and now the real agenda is to maintain and expand control of resources and markets as well as military superiority on behalf of the American ruling class.

However, this incident shows that even the “progressive” wing of the Democratic Party isn’t willing or able to provide a serious challenge to U.S. imperialism.

When AOC and “The Squad” were first elected, they seemed to offer an alternative to business as usual. They self-identified as socialists and had the backing of a mass movement. However, by relying on the Democratic Party as their vehicle for change, they have steadily accommodated themselves to the party milieux and the CPC.

Socialists completely oppose the invasion of Ukraine by Russia and oppose all imperialist wars. Russia should immediately cease fire and withdraw all troops, mercenaries, and weapons from Ukraine. All U.S. and NATO troops, advisors, and military equipment should be withdrawn from Ukraine and Eastern Europe as well.

Socialists oppose all imperialism, especially “our own.” While Biden speaks about defending “democracy,” his administration has been sending Patriot missiles to the Saudi dictatorship, who are engaged in an equally brutal war in Yemen.

On the basis of capitalism there is no road to real independence for Ukraine, whether through imperialist war or imperialist diplomacy. We defend the right of the Ukrainian people to decide their own fate, including armed self-defense. What’s needed is an independent working-class-led struggle that opposes not only Russian imperialism, but also the reactionary Western stooge regime of Zelensky.

In Democratic Party circles, Zelensky is held up as a hero. But prior to the war, Zelensky was extremely unpopular among Ukrainians. He was associated with a flailing economy and declining living standards. The Russian invasion has boosted his popularity, but he has used this popularity to carry out vicious privatizations and attacks on workers’ rights. Law 5371, ratified by the Ukrainian government in August, stripped 70% of the workforce of union rights.

Ukrainian self-determination will be won by the working class of Ukraine itself, struggling to drive the Russian troops out, and struggling to build a political alternative to the Zelensky government and U.S. imperialism while appealing to the international working class for aid. This would include a class appeal to Russian soldiers most of whom do not want to be part of this brutal occupation. We can look to the revolutionary movements in Belarus in 2020 and Kazakhstan at the beginning of this year. In Russia itself, there was a rise in anti-war activity in response to Putin’s September mobilization of troops. These struggles, rather than U.S. military aid or “proactive diplomatic pushes,” show the way forward.

Ultimately, we need to build an international, working-class struggle against all imperialist warmongers. We need to end the capitalist system that’s responsible for modern wars, and to replace it with a new society, based on a democratically planned economy and a free and voluntary confederation of socialist states. This is the only way to assure the right to self-determination, decent living standards, and freedom from repression and war.