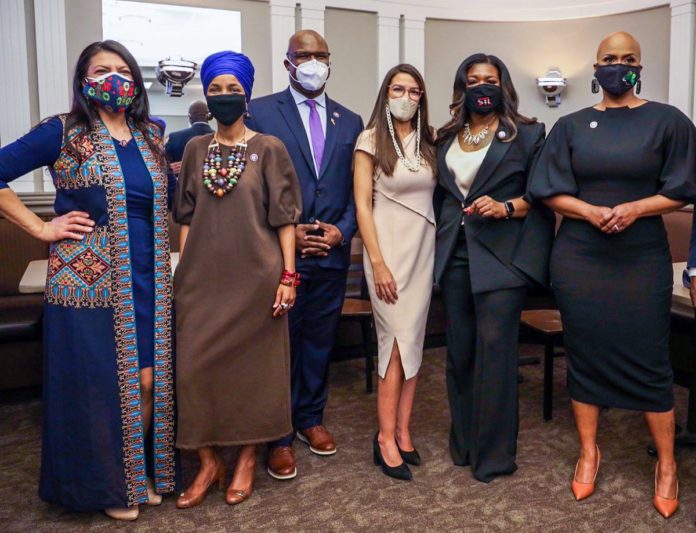 In 2018, on her first day in Washington DC as the newly elected congressperson from New York City, democratic socialist Alexandria Ocasio-Cortez joined environmental activists as they staged a sit-in at Nancy Pelosi’s office in the Capitol Building. The message was clear: AOC was not your ordinary establishment politician.

Corbin Trent, AOC’s spokesman at the time, explained AOC’s appearance at the protest, “She was elected as part of the movement, she intends to govern as part of the movement. She thinks there is no other priority that we should be focused on and supports the Sunrise Movement’s call for Democrats to create a plan to transition the economy to a zero carbon economy so we have that ready to go when we take back the Presidency in 2020.”

Since Bernie Sanders’ explosive presidential candidacy in the 2016 election, Sanders, AOC, and other members of the Squad in Congress have been reference points for leftwing movements and campaigns. Their prominence is a representation of the leftward political shift among broad sections of U.S. society.

AOC spent her first years in office under a Trump presidency. The Democrats controlled only the House and AOC was broadly untested. Then came the election of Joe Biden, a longtime consummate corporate Democrat. This posed a challenge to these progressive leaders in Washington. Would Bernie and AOC consistently oppose the Democratic establishment? Would AOC and the Squad galvanize their base and use the slim Democratic margin in Congress to try and win concessions for working class people from the political establishment, or would they fall in line behind Nancy Pelosi and the rest of the Democratic party power structure?

Alliance With The Establishment

More than a year into Biden’s presidency, Bernie, AOC and the Squad have been entirely unprepared to stand up for their program of a federal $15 minimum wage, Medicare-for-All, free public college education, cancellation of student debt, and a Green New Deal. Instead of mobilizing ordinary people to fight for these enormously popular measures, they have abandoned their original goals that got them elected and formed an alliance with Biden to back his watered-down agenda.

This strategy has failed miserably, with serious consequences for working class people. The Democrats have failed to get any of their agenda through Congress, other than an extremely business-friendly and highly inadequate infrastructure bill. In addition to the existing crises of healthcare, housing, student debt, the low wage job economy, and the climate, working people also have to deal with the skyrocketing cost of living and a seemingly unending deadly pandemic. With midterm elections approaching, and Biden’s approval numbers having approached historic lows, the door is open for the Trump-dominated Republicans to make major gains. Already, the right has used this momentum to launch new attacks on women and LGBTQ people in Republican-dominated states.

On top of the crises at home, the Russian invasion of Ukraine is now another front on which working class people both in the U.S. and worldwide desperately need leadership prepared to take a position based on internationalist solidarity and not nationalism. Aside from making a brief video explaining the real consequence of the U.S. and NATO declaring a no-fly zone, AOC’s approach on the war has been seriously lacking. She has signed onto a bipartisan letter to the president which has no anti-war message and which actually leaves open the possibility of direct U.S. military intervention. Working class people didn’t send AOC to Congress to get along with capitalist class representatives. Instead of developing a principled anti-war position, AOC is taking the path of least resistance. To her credit, Ilhan Omar, the Squad member in the House from Minnesota, has voted against every hawkish pro-war measure, demonstrating a very principled, internationalist approach in contrast to her colleagues.

It Didn’t Have To Be This Way

The failure of Bernie and AOC to build a movement behind their original agenda was in no way predestined. Socialist Alternative explained how AOC could have responded to #ForceTheVote by embracing the working class activists who were looking to continue the fight for Medicare-for-All regardless of who sat in the president’s office.

There is no doubt that AOC would have come under extreme pressure from the establishment had she organized the Squad to force a floor vote for Medicare-for-All. But this should come as no surprise. If elected representatives are going to truly represent the interests of working class people, they will be under immense pressure from the capitalist-dominated halls of power on a constant basis. It is only the active support of ordinary working class people organized to fight for a left program that provides relief.

Less than four years after she sat in with Sunrise Movement protesters, AOC went to the global climate summit COP26, not to join the youth climate protesters in the streets of Glasgow, but as part of the U.S. congressional delegation led by, ironically perhaps, Nancy Pelosi. AOC, speaking at an official COP26 event, reassured the world that, “when we say that the United States is back, it’s not just that we’re back in the way that the United States was pursuing climate policy before. It is different. And I would argue that it’s a fundamentally different approach.”

The approach that AOC was talking about from within the convention center in Glasgow was not the Green New Deal that AOC has (sometimes) championed, and which aims to get to net zero carbon emissions by 2050 globally as part of a broadly transformative pro-worker and social justice-based agenda. AOC was actually talking about Biden’s climate agenda which has a much more modest target, and uses market incentives to inch closer to the net-zero goal without any of the transformative potential of the Green New Deal.

As we know now, Biden’s “Build Back Better” plan which included his limited measures to help the climate, never actually made it to the floor of the Senate for a vote. Key sections of the capitalist class that control the economy, represented ably by Joe Manchin, refused to allow even Biden’s limited measures to pass. Biden now, faced with soaring gas prices, is sending his administration on a “drill, baby, drill” mission to ramp up domestic oil production and line the pockets of U.S. oil tycoons.

While some people may have seen AOC and Bernie’s “go along to get along” approach to the Biden administration as strategic, unfortunately it’s been entirely useless. It proved that it will take a sustained mass movement, likely including strike action, to force the political establishment to take action to even partially defeat the power of the fossil fuel industry and meaningfully reduce carbon emissions.

Time To Abandon The Democratic Party

From climate to healthcare, student debt, and the federal minimum wage, progress on the program championed by Bernie Sanders and AOC is stalled. Not only that, but the right wing has gathered serious momentum in attacking women and LGBTQ people. Despite broad popular support for abortion access and LGTBQ rights, there has been a massive vacuum of leadership in defending against right wing attacks. Neither the older liberal women’s and LGBTQ groups, nor the left of the Democratic Party including AOC and the Squad have used their platforms to galvanize people to fight back. The absence of a sustained, serious movement in opposing the Texas abortion ban last September has meant that the right wing dominated Supreme Court is very likely emboldened to overturn Roe v. Wade entirely. If a major protest movement doesn’t develop around the attacks on particularly trans youth, we will likely see more and more states passing anti-LGBTQ laws.

We should be very clear that the rightwing attacks on women and LGBTQ people do not represent a general shift rightward in attitudes of working class people. The majority of Americans support leaving Roe intact. Attitudes on LGTBQ people are generally becoming more progressive, not less. If AOC was governing “as part of the movement,” she would be appearing to speak at protests, organizing town halls, and exposing the inaction of the liberal women’s and LGTBQ groups. Instead AOC’s biggest headline in the last year was for showing up at the Met Gala to hobnob with celebrities, rather than protest outside of it. Her social media in recent weeks is less about politics and protest and more about beauty tips.

The current situation for the left is difficult and complex. With Biden broadly unpopular, and the left of the Democratic Party having thrown their lot in with him, the midterm elections are likely to be a watershed moment for the Republicans. AOC, the rest of the Squad, and Bernie Sanders have largely abandoned the pro-working class, left wing programs that made them so popular, and it’s extremely unlikely that they will find their way back to meaningfully fighting for working people without a massive push from below.

The collapse in fighting credibility of these figures is a direct product of their commitment to remain in the Democratic Party. The Democratic Party establishment specializes in one thing: keeping progressives in check. They have exerted tremendous pressure on these figures, and that pressure has proven insurmountable. If AOC and Bernie, instead of trying to keep the peace in a capitalist party, built a new political party for the working class, they would be freed up to fight ferociously for their agenda and we would’ve backed them up.

As we have raised countless times, if Bernie Sanders had used either presidential campaign to call for an independent, working class political party, millions would have met that call. Such a party could’ve been used to organize a fight against attacks from the right and to build political support for the labor struggles that have burst onto the scene.

Of course, the opportunity is not lost and the urgency for a political alternative to the Democrats has only grown. The left needs to learn the lessons from the collapse of Bernie and AOC’s legitimacy and immediately end its practice of supporting “lesser evil” Democrats. We need to run independent, working-class candidates across the country as a first step to building a new political party.

It’s necessary for the left to clearly assess the weaknesses of leaders, campaigns and movements the past several years and rebuild its organizations of struggle firmly on the basis of the multi-racial working class.