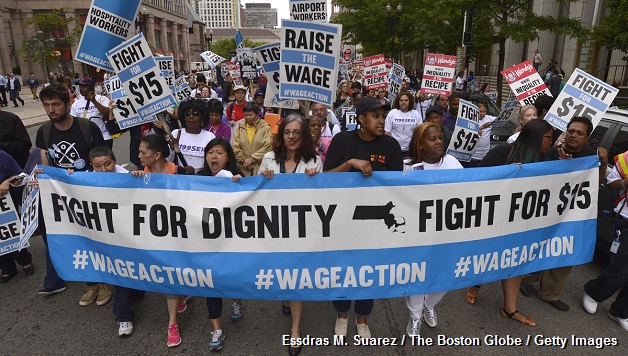 Space Growing for a Fight-Back in Workplaces, on the Streets and at the Ballot Box

American society today is in a state of simmering discontent. The U.S. economy is emerging from the biggest economic downturn since the Great Depression. The rate of job creation is the highest in twenty years, but the bulk of the jobs being created are low-paid. In fact, despite economic growth there has been essentially no growth in wages. There is vast anger at the scale of inequality, at the political dysfunction in Washington, and at racial injustice.

We in Socialist Alternative said that the midterm victory of the Republicans did not give them a popular mandate for launching more attacks on working people. One recent poll showed that 63% support a $15 federal minimum wage! This statistic alone gives the lie to the idea that the country is moving to the right.

Since November, we have seen the eruption of the Black Lives Matter movement (BLM) on a national scale, expressing the biggest radicalization of black youth in 40 years. The fight for a $15 minimum wage is extending and sharpening in different parts of the country after victories in Seattle and San Francisco. Young immigrants continue to take courageous action against the inhuman denial of basic rights; women fight back against the attacks on reproductive rights and epidemic levels of violence, whether on college campuses or in the NFL; and the fight for marriage equality is still making forward progress.

Stopping the Retreat of the Unions But the single biggest factor holding back a more generalized struggle against austerity, inequality, and racial injustice is the absence of a fighting mass labor movement. The unions are at their weakest point in more than a hundred years. The stagnation of wages during a period of growth reflects this. The passing of “right to work” legislation, which we discuss separately, is a serious setback.

Nevertheless, the growing movement of fast-food workers, which has spurred the fight for $15, as well as the strike of refinery workers against big oil, which focused on the terrible safety conditions in the industry, show the huge potential for rebuilding the labor movement around fights with broad popular appeal. We have urged that the unions, with their still significant numbers and resources, should join forces with BLM to push for serious reforms to the criminal justice system as well as for economic demands like the $15 minimum wage. Imagine the impact if the unions and the main civil rights organizations seriously mobilized for a national day of action in solidarity with BLM.

Rebuilding the labor movement means rebuilding collective strength in the workplaces and a culture of struggle. This could be a protracted process and will require new forms of organization. It will certainly require building a new leadership that rejects the bankrupt idea of “partnership” with big business and its political parties. BLM and the fight for $15 can play a key role in pushing this process forward.

Despite the temporary ebbing of the BLM movement as a visible force on a national scale, police shootings of unarmed people of color are now regularly leading to significant and determined local protests as in Madison, Wisconsin, after the killing of Tony Robinson, or in Pasco, Washington, after the killing of Antonio Zambrano-Montes.

Furthermore, the movement has led to Eric Holder and the Justice Department issuing a scathing report about Ferguson’s police department and court system and their systematic harassment and leeching of poor black people in this small city where the killing of Mike Brown sparked upheaval. The report is backed by the threat of a federal lawsuit or even the dissolution of the police force if certain reforms aren’t enacted. These reforms are only one step and are not even remotely close to what is needed, but they are still an important step. But while Obama says that Ferguson is not typical or “endemic,” there are, in fact, hundreds of Fergusons across this country. This is just one indication of the huge potential field of activity for the emerging black freedom movement.

We have urged the movement to develop a broader program to combat not just police brutality but the crushing economic pressures facing black workers and the working class generally. And many sections of the movement are beginning to do exactly that.

On the political plane, we also see sharp contradictions. Both houses of Congress are dominated by an erratic Republican majority that seems focused on staging stunts like House Speaker Boehner’s invitation to Israeli Prime Minister Netanyahu to address Congress. The clear goal was to undermine the Obama administration’s negotiations with Iran over its nuclear program.

Meanwhile, the Republicans are hellbent on overturning, through court action if necessary, any progressive measures that Obama has undertaken in the last while, including lifting the threat of deportation for five million people or the emissions controls imposed on coal-fired plants by the EPA. They also want to blow a huge hole in Obamacare through the lawsuit now in front of the Supreme Court. If successful, this lawsuit could cause an estimated nine million people to lose their tax credits and, therefore, be unable to afford insurance.

But, of course, there is a whole series of issues, like the Trans-Pacific Partnership, where the right wing of the Democrats and the more “responsible” big business wing of the Republicans are in complete agreement and both stand in complete opposition to the interests of working people.

The Democrats’ response to endless Republican attacks is weak at best. Hillary Clinton, who is getting ready to declare her candidacy for 2016, is surrounded by advisers who argue that the Democrats’ mistake in the midterms is that they moved too far to the left! The pro-corporate leadership of the party is doing all it can to contain Elizabeth Warren, whose popularity flows from her denunciations of Wall Street and her call for more regulation of the financial sector.

Meanwhile in Chicago, voters denied Rahm Emmanuel, “Mayor 1%,” an automatic re-election by forcing a runoff with Chuy Garcia, a populist Democrat. Millions of ordinary working people are looking for a way to fight back and yearn for political representatives who will actually represent their interests, not those of the corporations.

A little more than a year ago, Kshama Sawant won 95,000 votes and became the first socialist city council member in Seattle in more than a century. Through Sawant initiating the 15 Now grassroots campaign with the backing of a number of unions, working people in Seattle were able to beat back corporate resistance and win the $15 minimum wage in a major city for the first time. This has transformed the issue nationally and emboldened activists in a number of other cities and states to push for similar, or even better, measures.

This is a model of what must be done nationally on a much larger scale. An independent left political alternative to the entire establishment must be built which gives voice to and supports the struggles of working people, women, people of color, immigrants, environmental activists, and LGBTQ people. A rebuilt fighting labor movement can be the spine of this new political force which can begin to challenge the capitalist system itself, the root of the endless misery we face.