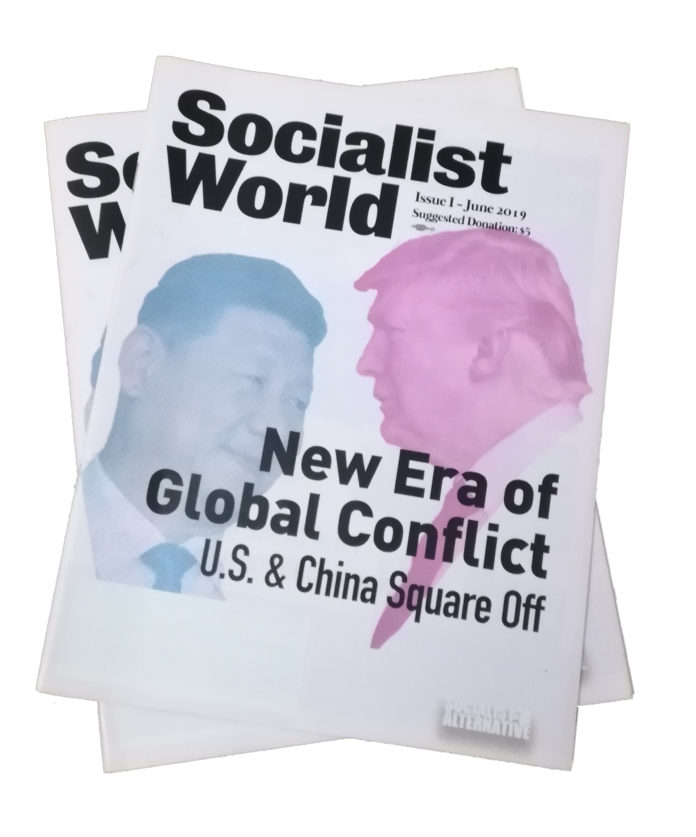 Socialist Political Journal
The massive interest in socialist ideas has radically changed the political landscape in the U.S. As part of the growth of the left, Socialist Alternative also grew significantly in recent years and achieved national prominence with the election of Kshama Sawant as the first openly socialist councilmember in Seattle in 2013.

Our organization prides itself on the clarity of our analysis and program. But we also feel the need to step up our game. For this reason we present a political journal, Socialist World, initially coming out three times a year.

Get Socialist World delivered to your door or inbox three times a year.

Blazing the Path for a New Left Party

A rebellion has broken out, beginning in Minneapolis (where both authors of this article live) and spreading throughout the country. The uprising was sparked by a brutal racist police murder of George Floyd, and the underlying anger is based on deep injustices. A multi-racial movement of predominantly working-class people is emerging with...
Read more
Fighting Racism

Socialists and the State: How to End Racist Policing

FDR and the Limits of the New Deal

The U.S.-China Cold War: Towards a Bipolar Global Economy

Brazil: Fight the Three Plagues — Bolsonaro, the Pandemic, and Social and Racial Inequality!

Bernie Sanders and the End of Neoliberalism

On April 8, Bernie Sanders “suspended” his campaign for president. In the weeks since, Sanders has turned a defeat into a rout...
Read more
Economy

Keynesianism and the Crisis of Capitalism

The current economic crisis may have been triggered by the coronavirus pandemic, but its roots lie in a deeper crisis of capitalism...
Read more
Theory

Capitalism and COVID-19: Why We Need a Planned Economy

Capitalism is set up like a house of cards. Disjointed supply chains, competition for component parts, research and technology hoarded – there...
Theory

Oxford University Press (2016) The spark ignited by West Virginia teachers in 2018 has given new energy to the...
Theory

The Socialist Manifesto: The Case for Radical Politics in an Era of Extreme Inequalityby Bhaskar SunkaraBasic Books 2019
Slider

The Economist (3/28/2020) has described it as “the most dramatic extension of state powers since the second world war." Across the globe...

People’s Republic of Walmart: How the World’s Biggest Corporations Are Laying the Foundation for Socialism By Leigh...
Read more
Socialist Alternative In Action

Continuing the Fight for International Socialism

Danny Byrne is a member of the Provisional Committee of the CWI and Socialist Alternative (England, Wales and Scotland).
Read more
Economy

“The way our economic and political systems work must change, or they will perish” (Martin Wolff, chief economics commentator of the Financial...
Top Stories

Britain's ongoing Brexit crisis has entered a new and spectacularly explosive phase. Prime Minister Boris Johnson's government is in a state of...
Environment

Climate Catastrophe and the Case for a Planned Economy

The 20-warmest years on record occurred in the past 22 years and rising temperatures are just one symptom of the climate catastrophe...

Rebuilding a Fighting Labor Movement – The Lessons of the Teachers’ Revolt

In what will go down as an historic moment for the American labor movement, the education workers of West Virginia walked out...
Read more
Theory

We are living through a dramatic period in U.S. history. While the Trump presidency has emboldened the right, we have also witnessed...
Read more
Culture

Review: Feminism for the 99%

The 2020 presidential elections are in full swing, and all of the Democratic Party presidential nominees have been asked the question, “Do...
2020 Elections

A new generation is rising, politically awakened by the horrific social and environmental future capitalism has on offer. Behind the mass anger...
Economy