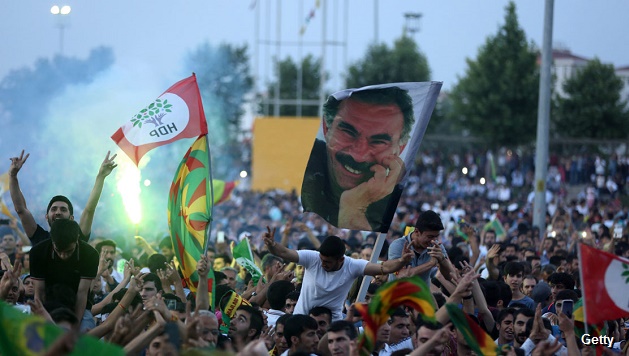 What future for the HDP?

7 June has shaken Turkey‘s political landscape. On election night, many left and Kurdish activists felt much as they had at the time of the Gezi Park movement in the summer of 2013.The ruling right-wing and conservative Islamist AKP (“Justice and Development Party”) suffered a bigger blow than most polls predicted, losing 2.6 million votes and 69 MPs, compared to the last legislative elections in 2011. The left, pro-Kurdish “Democratic Party of the People” (HDP) has won 13% of the votes, more than the 10% threshold needed to enter Parliament. This threshold is an extremely anti-democratic measure which was implemented in the wake of the military coup in 1980, precisely to prevent Kurdish parties to get any Parliamentary representation.

Especially in the Kurdish regions of the South East, spontaneous rallies and celebrations took place to welcome the HDP’s electoral breakthrough –for the first time in Turkish history, a pro-Kurdish party had made it into the Parliament. Also, the entry of many female HDP activists into the Assembly, of many representatives of social and political movements, and different kinds of minorities has a high symbolic value in the context of the Turkish political system, traditionally dominated by old, right-wing men. Many of the 80 new HDP members of Parliament belong indeed to ethnic, social or religious minorities. Their presence in the Turkish parliament is a blow to the nationalist reactionary elite, as was the presence of the first openly gay parliamentary candidate in the history of the Turkish Republic.

The election was also marked by rising polarisation, with an increase in votes for the far-right Nationalist Movement Party (MHP), whose vote-share rose from 13% to over 16%. The electoral campaign was notably shaken by outbursts of violence, especially against the HDP, with dozens of physical attacks on HDP offices and activists reported across the country.

The MHP whipped up Turkish nationalism, especially by blaming the AKP as “traitors” because of the peace process between the AKP government and the Kurdish movement. But the MHP played also a social populist card. Along with nationalism, they argued for the rise of the minimum wage, to reduce taxes on fuel and to stop the sackings in the state sector. This is another small indication that social issues have become more important, because of the problems in the Turkish economy and the fear of job losses.

The prevailing social and economic situation played a crucial role in this election. Many Turkish people held the personal feeling that their living standards had improved during the years of the AKP goverment. That is one of the main reasons why a segment of the Turkish poor, especially those targeted by the AKP’s campaigns of charity patronage has continued to vote for this party over the years.

However, this has started to change, with a deteriorating economic situation over the last two years, a rise in unemployment and inflation, and growing difficulties for millions of working class families. This, coupled with the general sharpening of attacks on democratic rights and a reinforcement of the regime‘s autocratic tendencies (extension of police powers, attacks on trade union rights, imprisonment of journalists and activists critical of the regime, muzzling social media etc.) has alienated a whole layer of long-standing AKP voters and supporters.

Illustrating this, President Erdogan‘s attempt at securing an absolute (two-thirds) parliamentary majority in order to change the Constitution in favour of stronger powers for himself totally backfired, to the point that the AKP lost even its simple parliamentary majority, getting only 41% of the vote. This opens a period of political instability and uncertainty when it comes to the formation of the next government.

For the left, and for all those yearning and fighting for a better society, the HDP’s remarkable electoral success opens a window of political opportunities Since the election, HDP is the talk of the town.

The HDP is a coalition between left groups, parties and left individuals, whose core originated from the Kurdish national movement. In the last few months, the party leadership has managed to engage many activists from different social and political movements, such as the LGBT movement, and environmental campaigners, among others.The Kurdish BDP, or “Peace and Democracy Party” (the political arm of the banned PKK, a Kurdish separatist group) remains the dominating force inside the party. But the latter has also started to attract an increasing number of Turkish voters who have drawn the conclusion that the Erdogan-led AKP and the main opposition party, the CHP (“Republican People’s Party”), do not provide a favourable alternative. The vast majority of HDP voters are workers, pensioners, small farmers and young people, many of whom have been radicalised by the important struggles of workers and youth in the last few years to demand better working conditions, against precarious work, for democratic rights etc. Many HDP activists see themselves as socialists or communists.

The HDP stands for a better healthcare system, a stronger state-supported education system, a rise of the minimum wage to 1,800 Turkish Lira per month, and the shortening of the working week to 35 hours without loss of pay, among other important demands. All other parties were demanding much less, but the very fact that the HDP was bringing these social issues into the public debate –even though these did not dominate the party’s propaganda— forced the other parties to position themselves on those questions.

Overall HDP leaders put more emphasis on vague ideas such as “democratic breakthrough“, “radical democracy“, “great humanity“ –as well as campaigning for the rights of national minorities, of LGBT people etc. They also tried to surf on the religious feelings of a layer of the population. Figen Yüksegdag, co-leader of the HDP, in one of her final campaign speeches spoke about the corruption of AKP‘s leaders, and argued that corruption is an “insult to Islam“.

Looking at the HDP leadership, it is not clear what they actually want, and this is understandable from the fact that the social and political composition of the party is far from homogeneous. Can the HDP become a new workers‘ party, or will it turn into a vaguely leftist liberal party, like, for example the Greens in most of Europe?

Worldwide, the crisis of capitalism is getting worse, and Turkey is not an exception. Workers and youth face hard times. To defend democratic rights and fight for social improvements, a militant party rooted in the working class will be needed. A party that has strong links with trade unions and social movements. A party where MPs use their position in the Parliament as a platform for defending workers’ struggles.

If the MPs of the HDP use the first parliamentary session as a launchpad to start a bold campaign for securing their social and political demands (rise of the minimum wage, 35-hour week, getting rid of the anti-strike laws, etc) they could gain a lot of traction and respect from many workers and youth all around the country. It would also contribute to expose the traditional “Kemalist” CHP as well as the far right MHP, who had the rise of the minimum wage in their electoral program but are not ready to put up a fight for it.

A new left workers‘ party that stands for workers‘ rights and has strong social demands would have a great opportunity to grow in Turkey. Ten of thousands of workers and youth have big hopes in the HDP to fulfill this role. It is possible that many new people will now move towards joining it.

Yet many Turkish workers are still hostile towards the HDP. Some of them see the HDP as a maneuver by the PKK, a party which is dominated by old PKK cadres and where the important decisions are made between the imprisoned PKK leader Abdullah Öcalan and the HDP leaders. This is an important reason why the HDP needs democratic and transparent structures. It is especially important that workers and youth can see how decisions are made, and that there is no “hidden PKK-agenda”.

In the election, the HDP leadership got lot of support from Turkish people, but the big majority of these supporters and voters belong to liberal middle classes. Building a bridge between Kurdish and Turkish workers is a key task for the future of the workers’ movement in Turkey. The HDP, taking into account its election success, can make important steps in that direction. By picking up every social issue, every little strike or other workers’ resistance and using their position in the media and in the Parliament, the HDP could become a “sounding-board” of the whole working class.

It is certainly positive that the HDP has ruled out any coalition with the AKP from the beginning. But they should also unequivocally exclude any coalition with or support for forces other than the AKP, which they have not made clear. Any new government, whatever it is, will be a government of social cuts and rightwing policies. Hence rather than calling all parties to be “responsible” and to contribute to political stability, and giving priority to coalition talks with pro-capitalist forces, the HDP leadership should prepare for the coming resistance. It could, for example, use the momentum of its successful campaign and its newly acquired position to call for mass meetings, inviting workers, young people, social campaigners etc to discuss together how to build the next stages of the struggle.

The experience with many left parties around the world shows that after initial electoral successes, there is a real danger that such parties swing to the right. To prevent this from happening, a cohesive political programme, democratic structures at all levels and a mass active membership needs to be developped. Defending a genuine socialist orientation for the HDP, based on support for mass working class action, and for the nationalisation of the banks and big industries, will be a key task of activists in the coming period. Developing organic connections with the grassroots of the social and trade union movements will also be crucial to make sure that this formation does not end up in a mire of political compromises, coalitions with pro-capitalist forces, and cuts.