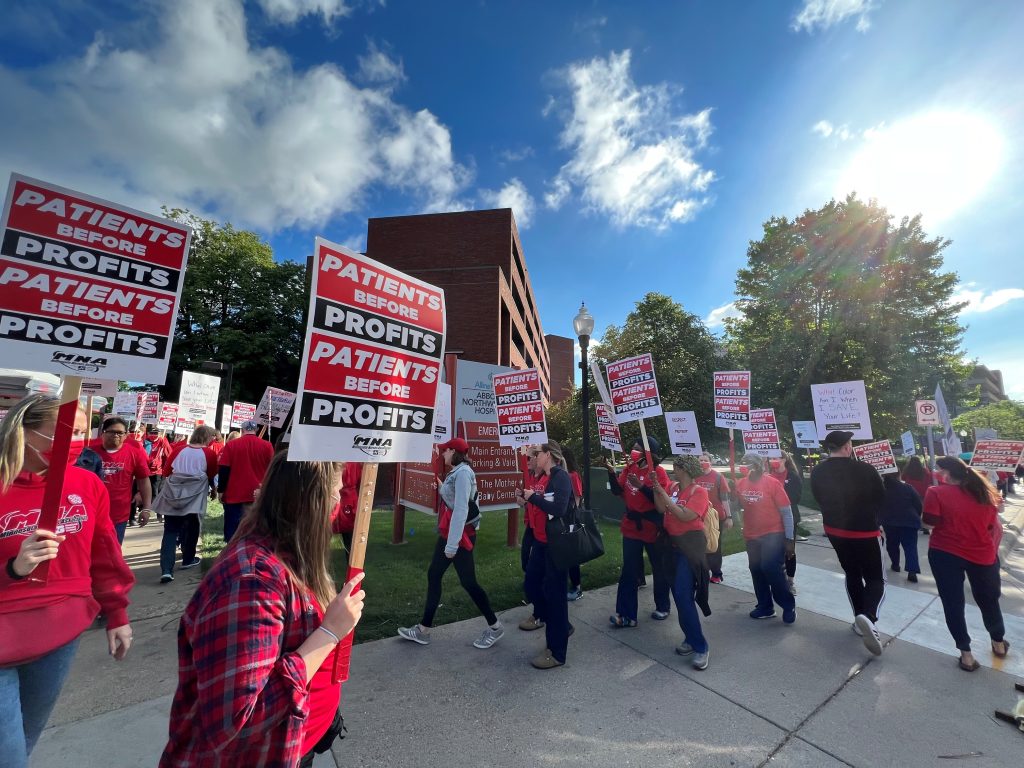 Maybe it feels like forever ago. Maybe it feels like just yesterday. Or maybe it feels like a strange combination of both? Regardless, in the early months of 2020, as COVID swept across the U.S. and the entire world, just about everyone seemed to be showing appreciation and admiration for the workers who were on the frontlines fighting a pandemic and trying desperately to keep the rest of us safe: nurses and other healthcare workers.

From Wuhan, China to New York City, residents started a trend by banging pots and pans from windows during lockdowns to show appreciation and support for healthcare workers. Time Magazine dedicated its front page to the “heroes of the front lines.” Nurses posted selfies on Twitter showing their bruised and red faces from wearing masks for hours on end during their shifts.

While battling a raging pandemic, healthcare workers were fighting another enemy these last few years: greedy healthcare executives and our for-profit healthcare system.

We Want More Than Empty Praise

From the beginning, healthcare workers were demanding that the government and big business go beyond just calling them “heroes.” They demanded that their corporate healthcare bosses equip them with adequate PPE so they could be as protected as possible while battling a disease we didn’t yet understand. After the outbreak of COVID, healthcare workers quickly started fighting back across the country. In Worcester, MA nurses went on the longest nurses strike in U.S. history.

Now, Minnesota nurses are ready to join the fight against the for-profit healthcare companies. After trying to negotiate a new contract since March, nurses in the Twin Cities and the Twin Ports of Lake Superior across 15 hospitals voted by an overwhelming margin to authorize the Minnesota Nurses Association (MNA) union leadership to call a strike. This strike would have the potential to be one of the largest nurses strikes in U.S. history. 15,000 nurses could be out on the picket line! These nurses’ demands include increased staffing, retention, patient care, and wage increases.

Of course the hospital bosses call these demands “unrealistic” and “unaffordable.” They say they offered the nurses “double-digit raises” and that they should be grateful for that. However, this “double-digit” wage increase would be 11% over three years. That’s just over 3.5% a year while inflation is over 8%. Any raise that is less than inflation is a wage cut in real dollars. Wages need to be adjusted for the cost of living, our union contracts need COLA clauses guaranteeing a cost of living adjustment. Transit workers in Minnesota are committing ourselves to fight for COLA +1, guaranteeing that we get a raise above the rate of inflation.

MNA is putting forward the “patients before profits” slogan during this most recent campaign. The slogan highlights the rot at the core of our healthcare system; private hospital executives making million-dollar salaries at the expense of adequately staffing their hospitals with enough nurses so patients can get the care they deserve. MNA has made it very clear the disparity of pay between the healthcare CEOs and the average registered nurse, with some hospital CEOs making as much as 40 times more than the average nurse!

The Demand For Safe Staffing

All across the country and in Minnesota, nurses are overworked and hospitals are understaffed while patients suffer. Hospitals have refused to negotiate with nurses to come up with solutions to short-staffing and retention problems. More and more nurses are saying that they are planning to leave their jobs in a few years. Over half of those surveyed plan to leave the bedside.

While it might seem obvious that less people want to be nurses during COVID, the reality is that the nursing shortage has been with us for decades. Healthcare corporations have been trying for years to cut costs to increase their profits, but this has always come at the expense of patient care and put an increased burden on already stretched nurses leading to burnout.

There have been campaigns to get safe nurse-to-patient staffing ratios into law, like in Massachusetts, but the referendum there lost because of the mammoth and extremely expensive campaign that hospital executives launched to defeat it. What is clear is that nurses and their unions have been demanding increased staffing way before we knew anything about COVID and if the hospitals didn’t insist on opposing the nurses’ demands at every turn, we would have been better prepared for the pandemic.

Despite the setbacks and obstacles, Minnesota nurses reminded all of us that in order to take on major hospital corporations, we’ll need to put up a real fight. The resounding strike vote from 15,000 MNA nurses shows that there is a willingness to not just accept the cuts to healthcare. These nurses take very seriously what they do and have pride in the care they give patients. They don’t want to quit, they want to make their hospitals better for their patients, in the face of the bosses doing everything they can to prevent them from doing just that.

Preparing For A Strike

MNA hasn’t just sat on its hands since the vote. On August 22 they mobilized their members for an informational picket outside of Hennepin County Medical Center in downtown Minneapolis. This was the first time ever that nurses at this hospital had a picket. This picket was not a work stoppage, but provided an opportunity for the MNA to build for strike action. It is notable that this particular hospital isn’t among the 15 that would be affected by the potential strike, but the nurses that work there are still members of MNA, and it was a good step to include these nurses in the struggle. Actions like these that bring in more workers into the fight are an important part of strike preparation.

The informational picket was also a good opportunity for other unions to show their solidarity with MNA. Unions including  ATU 1005, AFSCME, SEIU, Teamsters, and IBEW were among the unions that had representatives at the picket. This kind of labor solidarity is absolutely necessary for any union to win victories. If the MNA does go out on strike, Minnesota’s AFL-CIO should put all the resources at its disposal into organizing days of action in support of the nurses. They could visit picket lines or even host a rally at the capitol in St. Paul, mobilizing union members from across Minnesota.

The picket earlier this week also included several Democratic politicians from across the state. While the Democrats do sometimes show up to pickets and make impressive speeches, this is almost always the farthest they’re willing to go. The Democrats are not committed to fighting for the demands of nurses, like the NNU supported demand for Medicare For All. In fact, Democrats, with a super majority in California, killed a single payer health bill just this year.

Nurses could be seen walking the picket line with signs that read “from hero to zero,” expressing their disgust with healthcare executives cynically calling them heroes while refusing to meet their demands at the negotiating table.

The nurses have shown that they aren’t going to accept this any more! The MNA should call a strike now after such a strong vote from its members. Socialist Alternative stands in full solidarity with Minnesota nurses. If they go on strike we will be there with them on the picket lines and use our positions in the labor movement to mobilize other union members and working people to the picket lines as well. Let’s make “patients before profits” happen!