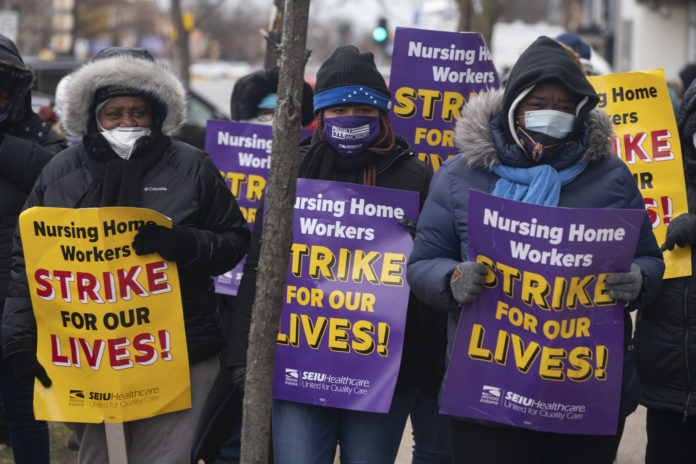 On November 23, 700 Certified Nursing Assistants and other healthcare workers went on strike at 11 Chicagoland area nursing homes owned by the for-profit chain Infinity. The workers at Infinity were fighting to bring their facilities into line with a master contract covering over 100 other nursing homes in Illinois and Indiana, which would raise the starting wage for all employees to $15 an hour. Other demands included hazard pay during the pandemic. All of these homes are for-profit facilities funded from Medicare and Medicaid.

Chicago Socialist Alternative has talked to workers on the picket lines who have done the vital, difficult work of patient care for more than 20 years and still make less than $15 an hour, while the owner of the chain, Moishe Gubin, received $12.7 million under the CARES Act – with no regulations on where exactly that money would go. Striking workers chanted “Moishe Gubin, rich and rude, we don’t like your attitude!” and “Sign the contract, pay the people!”

Infinity is tied with Illinois’ biggest for-profit nursing home chain for the state’s highest death rate from COVID-19, a horrifying nine per 100 beds, which is almost 100 times the statewide per capita death rate from the disease.

The Infinity chain includes City View Multicare Center in Cicero, which has had 249 coronavirus cases, and Niles Nursing & Rehabilitation, which has had 54 COVID-related deaths, the most at any long-term care facility in the state.

But workers believe these figures are underestimates. Early in the pandemic they were not being told who was and was not testing positive for COVID-19. An investigation by Chicago public radio has found that “In the 20 counties hit hardest by the virus, for-profit nursing homes have had nearly double the death rates as nonprofit facilities.”

Workers told Socialist Alternative that before the pandemic they had five CNA’s per shift for a floor with 60 residents, who are housed two, three, and four to a room, and roughly half of whom cannot eat or use the bathroom unaided. Under pressure from the union, the employer paid each of the workers $200 a month in hazard pay for March, April, and May, but then the payments stopped and staff began to leave. The result has been dangerously low staffing levels, on some shifts as low as three CNAs for 60 residents.

As we go to press, a contract has been signed and workers are back on the job, faced with cleaning up the messes left by agency scabs but welcomed back by their patients and knowing that they beat their boss – who had originally walked away from the bargaining table a few days into the strike. Workers who have never been on strike before have felt their strength.

In the words of a striking picket captain:  “Instead of us just complaining about something we didn’t like, we went out and did something about it. My first strike, and I can say it was actually a success. My co-workers won’t worry about going on strike again. Now that they’ve done it they’re not afraid”. 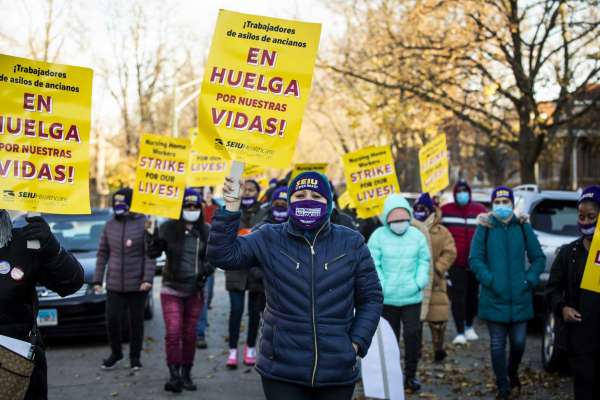 New York State Nurses Association members in New Rochelle, NY marched with signs declaring “too many patients, too few RNs” and “safe staffing saves lives” as they launched their two-day strike at Montefiore New Rochelle Hospital on December 1st. The foremost demand was increased staffing in order to deal with the COVID-19 surge currently being seen at the hospital. Striking nurses explained that a one-to-four nurse to patient ratio is a safe number, but were asking for one-to-six. The actual situation at the hospital is ten patients to every nurse! Socialist Alternative members joined the picket line, standing in solidarity with nurses demanding much-needed safe staffing.

New Rochelle was an initial COVID hot spot as New York developed into the global epicenter of the pandemic earlier this year. The nursing staff at the time lost one of their own to the virus. Despite this personal cost, which clearly resulted from the criminal conditions healthcare workers were subjected to, the nurses are being cynically accused of using the pandemic as a political ploy by the hospital’s upper management who refuse to meet reasonable demands. The battle for safe conditions, both for healthcare workers and for patients, is necessarily taking the path of organized working class struggle.

This crisis has exposed the human price for a for-profit healthcare system. The Montefiore nurses, along with a growing wave of nurses strikes from Pennsylvania to Albany, serve as a bright example of how working people can unite to fight back against a system that puts workers’ health and livelihood last. 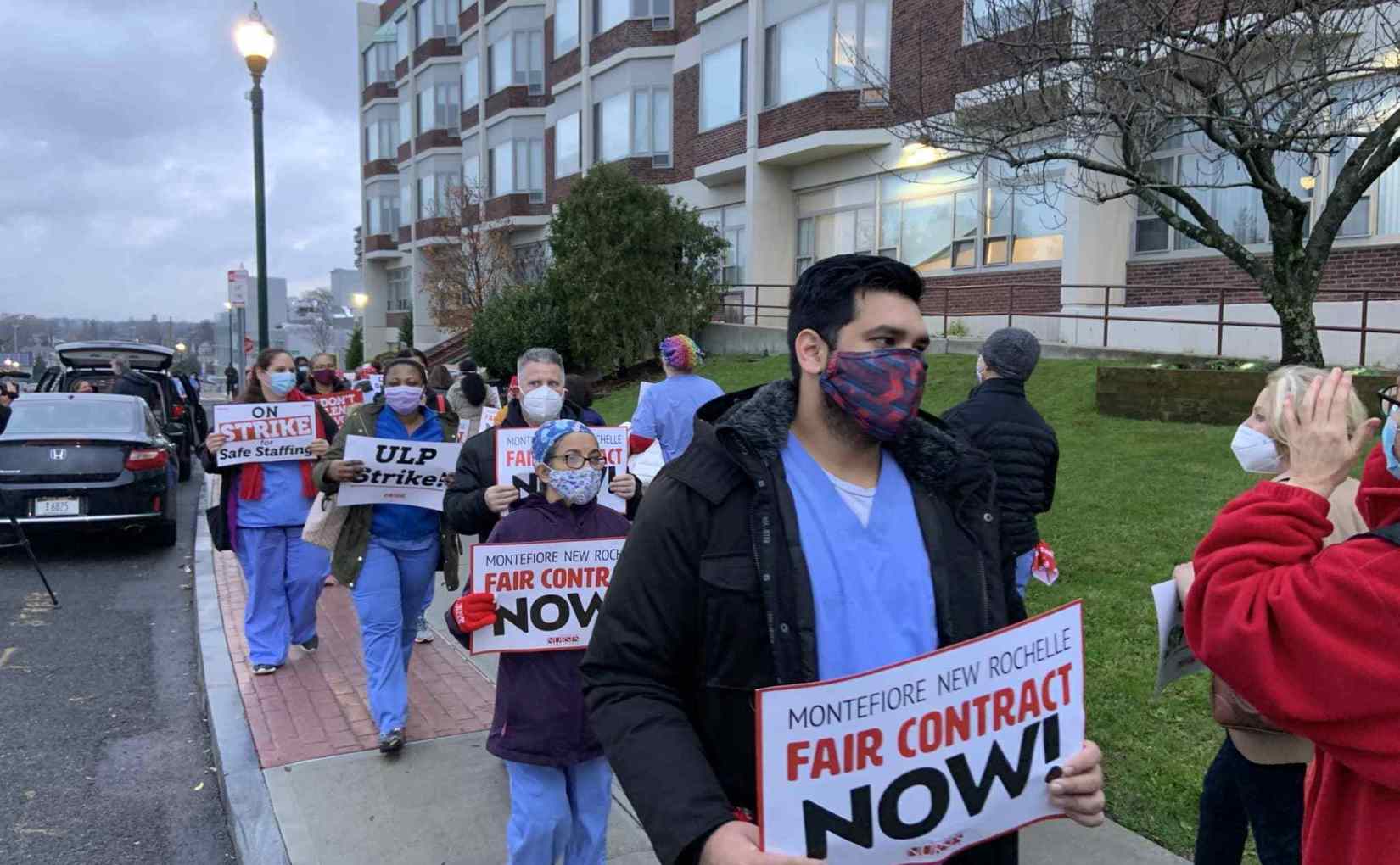