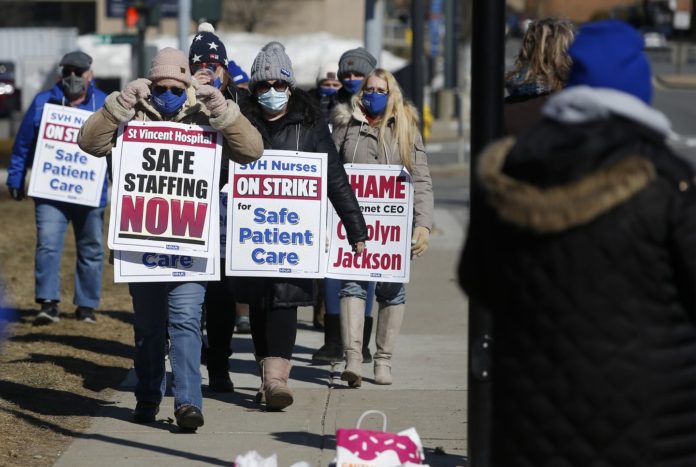 Since the writing of this article, Tenet and the MNA are re-entering contract negotiations Monday, August 16. Based on informal reports from nurses and MNA organizers, it appears they are getting closer to a winning contract, though exact details aren’t clear. The nurses want to return to work, but they want to do so safely and without any concessions on their demands.

In light of a record number of labor contracts expiring across industries this year, the 700 striking nurses at Saint Vincent Hospital are enormously powerful. Their contract expired over a year ago and they have now hit over 160 days on the picket lines. Pickets still run from 6am to 12am every day at five entrance points of the hospital. These pickets are attended in shifts with batches of different nurses throughout the day.

In early July, the St. Vincent’s nurses, organized with the Massachusetts Nurses Association (MNA), took their fight to the headquarters of the healthcare company that owns their hospital, Dallas-based Tenet Healthcare. They were met by the local branches of Socialist Alternative, DSA, a multitude of union members, and, notably, other nurses who work at Tenet Healthcare-owned hospitals in California who have recently voted to authorize a strike.

Two contracts have been proposed by the hospital since the nurses’ rally in Dallas, both of which were swiftly denied. The mantra of the union is that however many days have passed, they will be out for that many more. This of course shows a strong, fighting mood that the nurses will not settle for anything less than their original demands. But it still remains to be seen what will be the straw that breaks the camel’s back in resolving this important labor battle.

Everyone Feeling the Brunt of the Strike

St. Vincent’s Hospital recently announced an 80-bed reduction of in-patient beds, a 25% shuttering of critical care beds and 50% of beds in the psychiatric unit. These cuts are just one of many attempts by Tenet to undermine the nurses and force them back to work.

It’s clear from their chest-thumping attempts at intimidation that the bosses at Tenet are feeling the pressure of the strike. If other Tenet-owned hospitals across the country were to strike, the nurses in Worcester would have a much stronger position in hitting Tenet’s bottom line. It could even deliver them a victory in the fight for safe patient ratios and proper benefits that they have been fighting for for years.

The hospital has announced they will be hiring permanent replacements for the nurses which, if successfully implemented, could demoralize other healthcare workers who are agitating towards stronger contracts. However, if the Saint Vincent’s nurses win, that temporary demoralization would be cut across and the struggle could be a catalyst for healthcare workers across the country to take action!

In order to win, MNA nurses will need to advance beyond “One day longer, one day stronger,” and concentrate all their efforts on mobilizing community members and other healthcare workers to wage a full offensive against Tenet’s corporate greed and exploitation.

Socialist Alternative members have attended rallies and have set up tables in different areas of Worcester to urge people not to cross the picket line, donate to the strike fund, and visit the picket line. The nurses have astronomical community support, but there are still many instances of crossing the line by patients and other union members. No worker should cross the line while another is on strike. But the hospital’s effective propaganda, threats to fire other hospital workers, and weak union leadership have kept them returning to a nightmare facility of botched care from untrained travel nurses.The MNA along with other unions within the hospital, UFCW and the Teamsters, should be organizing mass canvassing in every neighborhood in Worcester so people in the community know not to cross the line until the nurses win a fair contract.

St. Vincent’s nurses have inspired other fights. Most recently, 39 VNA nurses across Boston and Worcester had a week-long strike over safe staffing and benefits in which the Saint Vincent’s nurses attended. The picket lines had strong energy, but unfortunately the weekend pickets were cancelled because too many nurses needed to work their second jobs. This is a true indictment of the horrible healthcare system we have, where nurses who got us through the pandemic can’t make ends meet!

For the St. Vincent’s nurses to win, we need secondary strikes at the Tenet-owned hospitals in California and we need local unions to withhold their labor from the hospital. Any strikebreaker coming to replace the nurses should be met with a fierce community opposition. Healthcare is not a commodity but a human right, and nurses all over are fighting corporate greed to make this a reality for all of us!