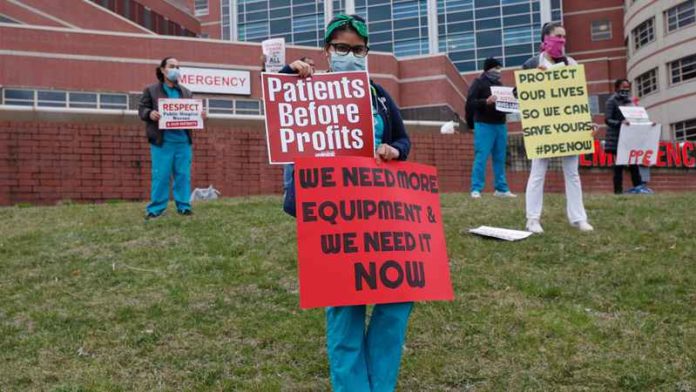 From China to Europe to New York, the coronavirus crisis has stressed healthcare systems to their breaking points and beyond. Patient care jobs in hospitals are now more risky and stressful than workers ever could have imagined. As of this writing, reports out of New York city hospitals are horrifying: workers given one set of personal protective equipment (PPE) to use all shift, some making do with garbage bags, workers forced to endure extremely dangerous working conditions with no rest, and emergency departments busting at the seams with no effective way to segregate known positives from those awaiting results.

Unsurprisingly, the lack of PPE and hospitals being stretched way past their capacities means that workers are contracting COVID-19. The New York Times is reporting that over 200 workers at one major New York City hospital have gotten the virus and two NYC nurses have died from COVID-19. The deaths of these nurses, and they will not be the last U.S. healthcare workers to die of the virus, are not a sad circumstance of fighting a pandemic but a criminal act of the Trump administration and the capitalist system as a whole.

Healthcare providers becoming ill is a frightening prospect for individual workers, and it’s also a key phase in a deadly cycle that we’ve seen play out in other countries hit hard by the pandemic. If hospitals are petri dishes for the coronavirus, then staff, paramedics, and EMTs all become vectors for transmission on the job and in their homes and communities. Healthcare workers seem to be at elevated risk of developing serious disease and needing hospital beds. If we can’t keep healthcare workers healthy, the entire community is at a much higher risk from COVID-19. Making matters even worse is the persistent lack of testing capacity. Healthcare providers with anything less than severe illness often still can’t get tested, weeks after hotspots first appeared in the U.S.

At this point in the arc of the pandemic, we know how to keep healthcare workers safe from COVID-19. When the disease first began spreading in China, too little was known about what was causing the illness (in part due to the Chinese regime’s suppression of doctors who were attempting to bring the outbreak to light). The results were grim for Wuhan’s healthcare workers as, in the early stages of the epidemic in China, thousands became infected and at least 46 died of COVID-19.

As is the case in the U.S. now, Wuhan faced shortages of PPE when COVID-19 began surging in the hospitals. Tens of thousands of healthcare workers were brought to Wuhan from other areas in China. PPE was resupplied and workers had full coverage suits with masks and face shields. It’s not clear if statistics coming from the pandemic in China are reliable, but reports suggest that the second group of healthcare providers had an extremely low rate of infection.

Hong Kong and Singapore both managed much less serious outbreaks with minimal infections among healthcare workers. Reports from these countries suggest that PPE was part of the success, as well as practices like vigilant hand hygiene and careful social distancing within the hospital itself, which are impossible to implement with any consistency when a staff is completely over capacity with extremely sick patients.

The criminal inaction primarily of the Trump administration and secondarily of the entire political establishment is directly responsible for shortages of PPE and lack of hospital capacity where the virus is surging. In 2019, the Trump administration actually conducted extensive modeling on what could happen in an epidemic. The draft report from the exercise cited potential problems with hospital preparedness, including getting enough PPE to hospitals. The shortage of PPE was predictable and was in fact predicted, yet the Trump administration still refuses to take the necessary steps to address the problem: nationalize the medical supply industry and rapidly ramp up production with a coordinated plan of distribution to the hardest hit areas.

The federal government’s long, failed quest to build a stockpile of relatively inexpensive, portable and easy-to-use ventilators illustrates the disaster of relying on private industry to supply essential medical equipment. In 2010, the government was in contract with a company to build tens of thousands of new ventilators in the event of the kind of pandemic we are facing now. Two years and several million taxpayer dollars later, the ventilator company was acquired by a larger medical device firm that killed the project, probably because the new ventilators would have undercut the larger company’s existing product line. Eventually, a new contract was signed with a Dutch company, Philips, which is now producing and selling a more expensive commercial version of the simpler machine that they’ve developed for the federal stockpile. Philips still hasn’t delivered a single ventilator for the government, but the commercial version is selling for nearly $5000 more than before the Covid-19 crisis. Under capitalism, the system is set up so profits come first, even before life-saving emergency equipment.

Trump’s various statements on the shortage of PPE utterly defy logic. He’s denied that there are shortages, he’s told us to trust the market, he’s attempted to deflect responsibility for PPE and ventilator shortages to the governors, saying about the federal government, “We’re not a shipping clerk.” With incredible disrespect for the frontline workers who are forced to risk their lives with every shift, Trump more recently suggested that New York hospital workers were stealing PPE, “Where are the masks going, are they going out the backdoor?”

Healthcare workers are absolutely desperate to get, in particular, disposable N95 masks, the standard protective mask that can filter small particles including viruses. Hospitals are not only soliciting donations of N95s from organizations that might have a bigger supply on hand, but even asking ordinary individuals to check their garages and bring in any unused masks they have. Nurses have posted on social media begging for donated masks. All across the country, a battalion of home crafters are sewing cloth masks, which are not as good as N95s or basic surgical masks, but still offer some protection, and distributing them to medical professionals who need them. Meanwhile, the going rate for N95s has skyrocketed and a large crowd of “entrepreneurs” has suddenly materialized to match hospitals with overseas supplies and pocketing pure profit on each deal.

Hospital administrators, who work far from the bedside, are sending down edicts that display their callous disregard for workers as well as their desperation in the face of the crisis. New York-Presbyterian hospital staff were told that “sick is relative,” and were ordered to come into work unless their symptoms were so severe that they needed hospitalization themselves. In many cases, hospital management is trying to cover up the PPE and infection control problems and workers are being threatened for speaking to the media. In at least two cases, desperately needed frontline healthcare workers have been fired for whistleblowing. Kaiser, a massive health system headquartered in California, told workers that they were not allowed to wear their own personally-procured PPE, a step workers were resorting to when not provided with PPE by the employer.

Healthcare workers are standing up to the hospital bosses and to the Trump administration in response. Nurses have held protests outside their hospitals (maintaining social distancing), fighting for the right to wear their own PPE on the job in California and for the right to have adequate PPE in New York. The nurses’ union is leading the fight to maintain scientifically appropriate standards for infection control while hospital administrators and the CDC are lowering requirements instead of joining with the unions to force state and federal governments to fix the PPE shortage.

Nurses and their colleagues on the hospital floors, from doctors to housekeeping staff, have the immediate experience that — combined with a comprehensive understanding of the science of how this virus is transmitted — can keep healthcare providers safe. Hospital safety committees, made up of workers on the ground, should be elected to organize staff on the job and ensure infection control measures are followed with adequate PPE provided, and to take action, up to and including walkouts if necessary.

Hospital workers caring for patients during a pandemic face real dangers under the best of circumstances. But hospitals turning into cesspools of contagion, staff being infected en masse, and workers dying of COVID-19; these worst-case outcomes that we are seeing play out are not inevitable but the result of systemic failures. The Trump administration, previous administrations, the private healthcare system, and for-profit medical supply industry are directly responsible for the chaotic and woefully inadequate preparations for this crisis.

Healthcare in the United States was already a crisis for millions of uninsured and underinsured people before the coronavirus crisis hit. The pandemic has horrifyingly exposed the total inability of capitalist healthcare to meet the needs of patients, workers, and communities in an emergency. Now more than ever, what is needed is a nationalized healthcare and medical supply system, run democratically by workers and patients, for the good of all of society instead of the profits of a tiny few.