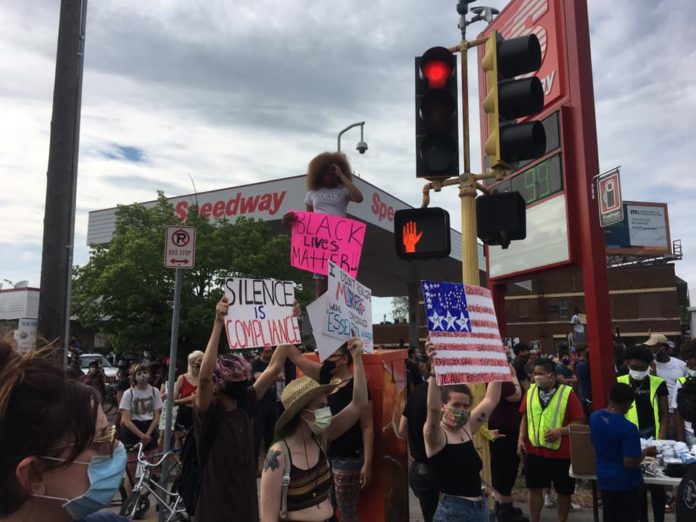 George Floyd suffocated to death with a Minneapolis Police Officer’s knee to his neck on May 25th, 2020. Video of Floyd’s murder released by the Washington Post clearly shows the police lied about Floyd resisting arrest. Murdered as someone who “looked like a suspect,” the events surrounding George Floyd’s death expose the casual yet deadly brutality of the police.

Police aggressively arrested Floyd based on a report that someone in the area tried to use a fake $20 bill. Beyond the basic idea that murder is a horrific and unjust response to the mere accusation of a crime of poverty, Floyd’s murder is a chilling preview of the state’s response during a deepening economic crisis that has resulted in nearly 40 million people unemployed. Floyd is captured on video repeatedly saying “I can’t breathe”, which tragically recalls Eric Garner who was murdered by  police in 2014. His death sparked mass days of action during the height of the Black Lives Matter movement.

Within hours, the deep anger erupted into protest and several thousand people marched to the Third Precinct. Overwhelmingly supported and attended by the wider community, houses along the march route hung signs in solidarity on their doors and porches. The protest was met with teargas, mace, rubber bullets and flashbangs.

To win #JusticeforGeorgeFloyd, we can’t trust the same political establishment that got us here. We should be clear that these protests are the most viable way to win #JusticeforGeorgeFloyd and bring attention to the ongoing reality of police brutality. We should expand the struggle to include broader mobilizations for coordinated mass days of action that involve youth, communities of color, and the wider working class. There is a risk that on-going protests without a sustained, coordinated structure can lose momentum. A well-organized mass movement can  begin to address the structural racism and inequality that surrounds police violence by taking up demands for social programs, public education, and permanently affordable social housing.

No Trust in Mayor Frey or Trump’s FBI

The Minneapolis Police Department’s (MPD) response to these protests stands in stark contrast to how armed “liberate the state” protests were handled weeks before. MPD’s response raises the risk right-wing vigilantes feel emboldened to terrorize protestors, like the racist vigilante violence against the Fourth Precinct occupation in 2015. MPD’s police union boss Bob Kroll is an ardent Trump supporter who introduced Trump at a rally in 2019 increasing the risk that Trump and right-wing forces could intervene.

To address the violent repression from the MPD or the threat of emboldened far-right vigilantes, mass organizations like unions will need to support the protests and use their resources to organize solidarity committees to protect protestors. In an important show of the potential for solidarity, the Minnesota Nurses and Minneapolis teachers unions have issued statements condemning Floyd’s murder. More unions should do the same.

Under immense pressure from a massive public outcry, and recognizing that people have no confidence in the MPD to investigate itself, Mayor Jacob Frey quickly pushed for the Minnesota Bureau of Criminal Affairs and the FBI to lead the investigation. Politicians use this tactic to blunt protests demanding the immediate prosecution of the officers involved, and to derail movements fighting for structural changes to policing.

We also need to be clear that state law and federal law enforcement agencies are not friends to working-class people, especially immigrants and communities of color. The Minnesota Bureau of Criminal Affairs was the organization that investigated the murder of Philando Castille, and paving the way way for the officer’s acquittal. Other methods like a grand jury rarely work, and result in indictments for police killings less than 2% of the time.

We should not have any confidence that the FBI will do any better. Operating under the direction of Donald Trump, who routinely sides with killer cops and far right forces, the FBI has a long history of terrorizing working-class communities like its spying program to entrap local Muslim youth, repression of indigenous rights activists, and programs like COINTELPRO which violently targeted black and brown radical movements.

While we should fight for the immediate prosecution of the officers involved in the case, we need a top to bottom overhaul of the MPD. The murder of George Floyd follows the 2017 murder of Justine Damond, the 2015 murder of Jamar Clark, and the 2013 murder of Terrance Franklin, along with many more.

Already politicians are pointing away from any structural change. For example, Minnesota’s senior US Senator Amy Klobuchar, one of Joe Biden’s top VP choices, is calling for an investigation into the “individuals involved.” Her statement neglects the well-known reality that few on-duty cops are ever prosecuted for their crimes, and already points away from the brutal and racist practices within the MPD surrounding this incident.

We have no trust in Mayor Frey or Trump’s FBI to achieve justice. Their continued failure to root out racist police and end the entrenched racial bias in law enforcement shows the urgent need for a fully independent, elected community-led investigation with full powers over the Minneapolis Police Department, including the power to subpoena, hiring, firing, and review budget priorities. These powers should be extended into a permanent democratically-elected community control board.

The Whole System Is Guilty

City Hall has done the barest minimum and only under concerted pressure from the community. Despite many high profile police killings, rather than leading a push to clean up the police, they’ve resisted community calls for justice. Even the “progressive” wing of City Hall fails to take action. In 2018, Councilmembers Alondra Cano and Council Vice President Andrea Jenkins voted with Lisa Goodman, Abdi Warsame, and Linea Palmisano against expanding City Council’s powers to have a degree of oversight over the Minneapolis Police Department. They sided with Police Chief Medaria Arradondo, whose appointment as the first black chief was viewed as a progessive measure itself, and Mayor Jacob Frey, who “adamantly opposed” any additional oversight over the MPD.

While corporations like Target are raking in record sales during the coronavirus lockdowns and Wall Street firms like US Bank are headquartered here, the Democrats who run Minneapolis preside over one of the most racially and economically unequal cities in the country. City Hall viciously opposed the $15/hr minimum wage for years, finally passing it under pressure from a growing movement, often echoing right-wing talking points about low-wage workers, wages, and job creators. For years they have tried to privatize what’s left of public housing, preferring a program of incentivizing luxury development with fantasies of trickle down benefits for working class people. A year ago, five people were killed in a high-rise apartment fire that could have been prevented had city building codes required the landlord to install a sprinkler system. Under capitalism, the rule-of-law is wielded as a pretext for the oppression of working people and marginalized communities, then evaporates when it comes to mass corporate fraud by the billionaire class.

We can build an alternative. Contrast the weaknesses in the Minneapolis council’s approach with Kshama Sawant, a Socialist Alternative member who has been elected to Seattle City Council three times. She’s been such a consistent voice for working-class people that corporations like Amazon spent $1.5 million to try to defeat her re-election campaign last year as revenge for her efforts to build a movement that can win a big business “Amazon Tax” on their billions in profits.

Kshama Sawant is also a consistent voice against police brutality, fighting against further militarization of Seattle Police and standing alone as the only “no” vote on City Council against a police contract which rolled back basic accountability measures. This enraged the Democratic Party establishment and the right-wing police union leadership, who campaigned alongside big business to defeat her. Imagine what we could do in times like this with even one elected official in Minneapolis who saw their role as fundamentally accountable to social justice movements, and not politics as usual!

We must go all out to build the protests aimed at winning justice for George Floyd.