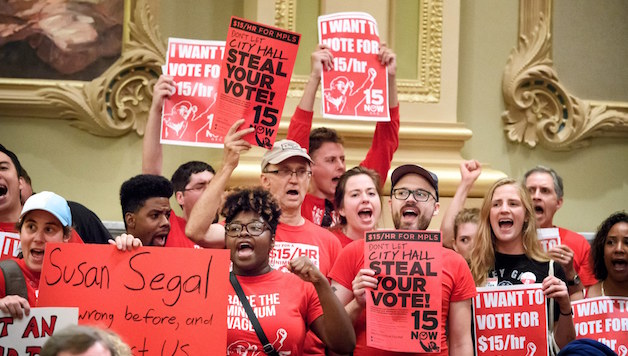 Minneapolis is poised to be the first midwestern city to pass a $15 an hour minimum wage. Following a three year campaign initiated by Socialist Alternative and 15 Now, and embraced by the wider labor and progressive movement, the Minneapolis City Council on Friday unanimously passed a staff directive to draw up an ordinance for a $15 an hour minimum wage and scheduled a final vote for June 30.

If passed, this victory will provide a major boost to the city council election campaign of Ginger Jentzen, Socialist Alternative member, former Executive Director of 15 Now, and a driving force behind the $15 fight in Minneapolis.

In a crucial win for workers, the ordinance does not include a lower minimum wage for tipped workers, a carve out that the restaurant lobby had pushed hard for in recent months. The staff directive proposes a four year phase-in for big business, but left undecided the phase-in time for small business and the definition of what constitutes a small business. In another worrying carve-out, the council agreed to a lower 90-day “training wage” for workers under 20 years old.

While momentum is now clearly on the side of workers to win $15, there remains a real risk of business escalating pressure in the weeks ahead to secure more carve-outs or an even longer phase-in. The biggest mistake the $15 movement could make right now would be to sit back and celebrate a premature victory. The movement must stay vigilant and continue escalating the pressure for the strongest possible ordinance until the final vote is taken.

Despite the long phase-in and other concessions, this minimum wage ordinance, if passed, would represent possibly the biggest victory for the left and labor movement in the Twin Cities in decades. In an era of rising inequality, a $15 an hour minimum wage would raise wages for 71,000 Minneapolis workers and, according to a new study, will put an estimated $140 million a year into the pockets of workers. Has any other city policy resulted in as large a transfer of wealth from big business to workers in Minneapolis history?

Especially for women and workers of color, who remain concentrated in low-wage jobs, a victory for $15 will represent a major step forward, providing a big boost to the wider fight against Minnesota’s worst-in-the-nation racial inequities. If Minneapolis becomes the first major non-coastal U.S. city to pass $15,  it will open the doors to victories across the midwest, which has been decimated by the economic crisis.

In three short years, the fight for $15 in Minneapolis went from an isolated call from the far left to become the central slogan of the Minneapolis labor and progressive movement in the 2017 city elections. Socialist Alternative was the first to popularize the demand for $15 in Minneapolis through our mass door-knocking for our 2013 city council campaign in Ward 9, which came within 229 votes of winning. “This is a huge victory for many of us who have been working on this for years,” said city council member Alondra Cano after the vote. “And it’s no secret that this movement started in Ward 9 with people like Ty Moore, Ginger Jentzen, and [CTUL leader] Veronica Mendez-Moore.”

Also in November 2013, Kshama Sawant won her first city council race in Seattle by pioneering the popular call for a $15 minimum wage there, and within six months of winning her seat Seattle became to be the first major city pass $15. Seattle’s wage hike was an historic victory and, combined with the inspiring wave of fast food worker strikes over the previous year, helped spark a far wider movement for $15 across the country.

Strategy Debates and the Democratic Party

The wider labor movement in Minneapolis was at first skeptical of winning $15, even after the June 2014 victory in Seattle. In early 2015 Neighborhoods Organizing for Change (NOC) and Centro de Trabajadores Unidos en Lucha (CTUL) – two workers rights groups led by people of color – signed onto a coalition effort with 15 Now and Socialist Alternative, opening up a serious debate within labor. Finally in April 2015 a wider coalition of powerful unions and progressive non-profits publicly embraced the popular call for $15 in Minneapolis.

A foundation of the fight for $15 in Minneapolis was the ongoing organizing work among low-wage workers, especially by CTUL, NOC, SEIU and 15 Now. The fast food strikes and ongoing protests popularized the demand for $15, and brought the voices of those most impacted by low wages into the center of the debate in Minneapolis.

Even then, winning required another two years of escalation tactics against the mayor and city council and a serious internal debate within the movement over how sharply to pressure Democratic Party leaders, many of whom claimed to be labor’s allies but refused to consistently fight for $15. Mayor Betsy Hodges in particular, who won her 2013 race as a progressive but then continually courted big business for support, remained publicly opposed to any minimum wage hike in Minneapolis until this past January when she abruptly changed her position in the face of a tough reelection battle. City Council member Jacob Frey, one of Hodges’ main challengers, only publicly announced support for a $15 minimum wage with no tip penalty this April.

By early 2016, it was clear that winning $15 would be unlikely as long as the movement limited itself to tactics that avoided a direct public clash with Mayor Hodges or the business-backed Democratic Party majority dominating city council. Unfortunately, this strategy of prioritizing insider relationships with Democratic Party tops remained the policy of most labor and progressive leaders in the $15 coalition.

This debate over our movement’s political strategy came to a head over whether or not to put a $15/hr minimum wage to voters in November 2016 as a charter amendment. A majority in City Hall were fiercely opposed to allowing voters to decide, both because it prevented them from watering down the policy for their business backers and because it would set a dangerous precedent, giving social movements confidence that they could rely on their own strength, not the political establishment, to win change.

The Democratic Party leaders’ opposition to the ballot initiative meant a majority of the $15 coalition didn’t back the effort. Nonetheless, the left forces within the coalition led by Socialist Alternative, 15 Now, and NOC collected nearly 20,000 signatures to successful qualify a ballot initiative. This was actively supported by CTUL, alongside the Minnesota Nurses and Communication Workers of America, two the few unions backing Bernie Sanders at the time, among others.

In a fractious public battle, only council members Cam Gordon and Alondra Cano stood up to business and political pressure. Hiding behind dubious legal objections, city council voted 11-2 to block the $15 initiative from going to voters. In August, 15 Now and NOC took the City of Minneapolis to court and won, with a judge ordering the charter amendment be put to voters in November. However, the city appealed and the Minnesota Supreme Court, dominated by Republican appointees, overturned the lower court decision, denying voters the opportunity pass $15.

While losing the battle in court, the $15 movement decisively won the wider war for public opinion in the course of the ballot initiative fight. During this bruising public debate, a poll showed 68 percent favoring our $15 charter amendment, compared to 25 percent opposed. As a concession to the public pressure, the City Council agreed to commission a study of $15 and established a formal process to again consider raising the minimum wage in 2017. Despite previous disagreements, the wider labor-community coalition for $15 has been broadly united behind pushing $15 to victory this year and blocking business attempts to impose a tip penalty or other big concessions.

Against this background the call for a $15 minimum wage, alongside other demands for racial equity reforms, emerged as a central dividing line in the hotly contested 2017 city council races. Business-backed Democrats in City Hall faced growing pressure from insurgent Berniecrat challengers, fueling record turnout in the Democratic Party caucuses this spring. In the end, most of the conservatives on City Council either lost Democratic Party endorsement outright, or were blocked from getting the endorsement by pro-$15 left challengers.

Within this wider political polarization in city politics, Ginger Jentzen’s Ward 3 city council campaign stands out. Using her election campaign to escalate the pressure for $15 inside City Hall, the Socialist Alternative member and former Executive Director of 15 Now is offering voters a taste of what a socialist organizer elected into City Hall could accomplish. Much like Kshama Sawant’s socialist campaigns in Seattle, Jentzen’s campaign is having a city-wide impact by acting as a platform to provide a voice and political lead for movement organizers.

With Socialist Alternative as the core activist base, Jentzen’s campaign has won support from broader forces including the Minnesota Nurses Association and the Communication Workers of America. However, most unions and progressive forces remain tied to the Democratic Party despite the entire experience of the $15 fight pointing to the need for independent left politics.

While a victory for $15 in the coming weeks will undoubtedly boost enthusiasm and support for Ginger in the November election, the opposite would be even more true. The Chamber of Commerce and their allies inside City Hall understand that, given the popular impatience and grassroots enthusiasm for $15, failure to quickly pass the minimum wage hike would risk a voter revolt in November.

To avoid a wider loss of political control – to avoid popular anger being channeled into Jentzen’s campaign or the campaigns of various progressive Democrats challenging business-backed Democratic incumbents – big business has been forced to accept $15 while continuing to fight for the longest possible phase-in, a tip penalty, and other carve-outs.

Over the last four years, workers and activists pushed $15 every step of the way, with most politicians chasing to catch up. Now more than ever we need the step up the pressure from below to win the strongest $15 possible, fighting attempts by big business to get a longer phase-in or extra carve-outs to protect their profits. The rent won’t wait, and neither should a living wage.

The powerful grassroots upsurge that has nearly won $15 an hour shows the potential to build an entirely new type of politics in Minneapolis. The momentum behind the Ginger Jentzen campaign in Ward 3 is rooted in the unapologetic demand that Minneapolis meet the needs of working people by radically changing its political priorities. A victory for $15 will show that we can build a powerful left alternative to corporate politics as usual.