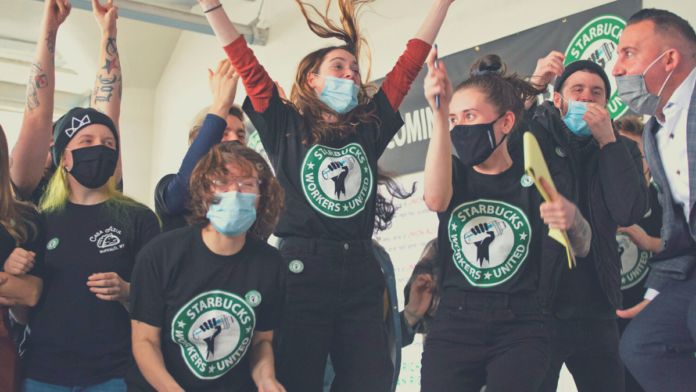 From Striketober to Starbucks, Amazon to Trader Joe’s, we are witnessing the sleeping giant of U.S. labor stir amidst the global crisis created by capitalism. The new union wave represents an important organizational shift for workers and young people everywhere. Now, with millions alive to the power of workplace organizing, it’s crucial that we distill the best lessons from this wave of new union campaigns.

The American labor movement in 2022 is in many ways unrecognizable from the situation a few years ago. According to The Guardian, “The NLRB has seen a 58% increase in union election petitions in the first three-quarters of fiscal year 2022. The number of strikes increased 76% in the first half of 2022 compared with 2021, with nearly three times the number of workers on strike.” This stands in contrast to a decades-long resistance from major unions to take up campaigns to organize the unorganized. Union density has fallen dramatically since the Reagan administration, when one out of every five American workers were union members. By 2021, that number has diminished to one out of every 10.

But the recent union surge, particularly in the service and logistics industries, is breathing new life into the movement. As of August 30, 220 Starbucks stores have won union elections with nearly 6,000 workers represented by Starbucks Workers United (SWBU). It’s no coincidence that women and queer people, who comprise most of Starbucks retail personnel, are at the forefront of struggles both in the streets and in the workplace.

The Amazon organizing wave, spurred on by the breakthrough victory at JFK8, is spreading across the country in a sector located at the heart of U.S. and global capitalism. Now, the Amazon Labor Union (ALU) is beginning to expand the struggle to other parts of the country, including in Kentucky and Albany.

Other drives and victories at Chipotle, Trader Joe’s, Google, Apple, REI, Activision Blizzard, Condé Nast, and more demonstrate that enormous swaths of the working class are excited by bold demands like a $30 starting wage at Amazon or audit-free gender affirming healthcare at Starbucks. While motivated by the same deep frustration with our working conditions, the recent labor upswing is the inverse of the Great Resignation. It is a compelling and inspiring indicator that workers are increasingly more willing to fight back rather than quit.

The 2020s are shaping up to be a decade of explosive organizing activity. The latest Gallup poll shows that public opinion of unions is at its highest since 1965 at 71%—a nearly identical level of enthusiasm to that of the groundbreaking labor movement in the 1930s.

Since the onset of the devastating COVID-19 pandemic, many freshly minted union members have been essential workers in retail, service, and logistics who faced enormous workplace pressure throughout the crisis. One of the first major workplace clashes this year was a storewide walkout organized by Buffalo Starbucks baristas in protest of the corporation’s abysmal COVID safety measures.

Gen Z workers inherited a laundry list of burdens created by generations of capitalist rule. Student debt, high housing costs, inflation, the global economic crisis and advances in left-leaning, pro-working class consciousness have radicalized a key section of the current workforce, which is now seeking to fight back in the workplace.

Many of the workers now turning to workplace organizing first were politically energized by the Bernie Sanders campaigns and the Black Lives Matter movement. Bernie’s ultimate capitulation to the political establishment, and the fact that very few concrete victories were won out of BLM, has no doubt contributed to these workers turning to this new arena of struggle.

The broader political situation in the U.S. makes the importance of militant worker organization even more important. As the far-right grows in both numbers and legitimacy off of Trump’s rise, the Democratic Party and its corporate pedigree have not only failed to provide for workers, but ceded ground to the GOP and capitalist interests.

Even still, amidst consistent betrayals to workers—including a failure to organize a movement to pass the worker-friendly PRO Act—the Biden presidency and other establishment forces survive because of the threat of further right-wing reaction.

The Situation: Victories and Setbacks

While the organizing tide is still high, it’s important we’re sober that the bosses are still strong and firmly in control. So far, Jeff Bezos, Howard Schultz, and their fellow union busters have unsurprisingly proven to be ferocious combatants in the class struggle.

JFK8’s victory was certainly a shot in the arm for Amazon workers across the country, but it’s clear that replicating this achievement is no simple matter. Mere weeks after workers at Staten Island wiped the floor with Bezos, Amazon picked up its entire anti-union operation and threw it all at neighboring sortation center LDJ5 to prevent the victory from spreading. The rate of Starbucks union filings has also slowed significantly, and as of August 25, Starbucks has reluctantly begun bargaining with just three of its more than 200 union stores.

Workers are now seeing just how brutally companies are willing to bring their vast resources to bear. Retaliatory firings are a central weapon used to demoralize and deter organizers, but we have yet to see the leadership of SBWU launch an appropriate fightback. Although the NLRB ordered Starbucks to reinstate the fired Memphis Seven, the court ruling came six months after their firing in February, with dozens more having been fired in the meantime. Similarly, Amazon was ordered to reinstate a fired worker at the JFK8 warehouse in Staten Island—two years after the illegal firing.

Corporations are deploying slimier tactics still! Amazon is pouring money into Pinkerton spies and union-busting consultants disguised as concerned coworkers. Their business executives infamously considered developing an employee chat app last year that would have banned the words “slave labor,” “plantation,” and “pay raise.” Starbucks is offering benefits exclusively to non-union stores, creating hostile work environments for organizers, forcing captive-audience meetings, and going so far as closing stores. Companies have also been using the courts to challenge election results at every turn, leveraging the NLRB in their favor instead.

The current National Labor Relations Board, in dispensing a few paltry progressive decisions, receives glowing praise as a state apparatus that’s “friendlier” to unions. Socialists know, however, that like the Supreme Court, the NLRB is managed and appointed by big business politicians who have zero interest in truly tipping the scales against capitalists. Labor history teaches us that nothing important to working people has ever been won through clever legalese or arbitration through corporate hacks.

For workers who have won union elections, delayed bargaining is now a fact of life. Winning a strong contract is absolutely crucial for building concrete gains in the workplace and for inspiring workers at the 8,000+ non-union Starbucks stores, 109 non-union Amazon fulfillment centers in the U.S., and countless other shops, to join the national union push.

It may seem like the billionaires have an impossible advantage against us, but make no mistake: they don’t. Any movement will have its peaks and lulls, but future success relies on our ability to learn from setbacks.

First and foremost, we need to remember that our power as workers comes from the shopfloor, not the courts. If the boss keeps making profits, they can endlessly pay for lawyers to delay, appeal and sap our momentum. Coordinated strikes, large and effective pickets, and mass protests are essential to force the bosses to negotiate.

However, to wield our power on the shopfloor we need to have our own clear demands, especially if the boss is willing to grant some limited reforms hoping to derail the union drive. Our demands need to start from our needs as workers, not what is acceptable to the boss. They can only be developed through democratic discussions with our coworkers.

Along similar lines, the bosses already have two political parties to represent their interests, while workers don’t have one of our own. The Democrats won’t ever be ours: they oppose issues like guaranteed access to affordable healthcare as viciously as the boss does. We need to support independent, working class fighters who will unapologetically bring our collective demands into a hostile political system.

Finally, we need to rapidly ramp up our efforts to organize the unorganized. Organizing drives can be launched in workplaces across the country, led by democratic organizing committees armed with clear demands and the knowledge that we will need to confront the boss on the shopfloor. On this basis we can rebuild a fighting, democratic labor movement that fights all the bosses, their political allies, and the capitalist system itself.