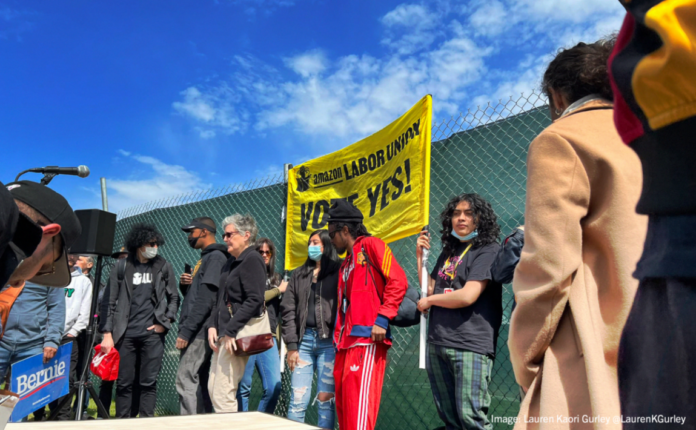 Weeks after winning a historic victory against Amazon with the unionization of the first ever U.S. warehouse, JFK8, the ALU has lost by a final vote of 381 to 618 in its second election at the neighboring sort center LDJ5.

Amazon and the corporate media will waste no time in delivering ALU’s eulogy and writing JFK8 off as an anomaly. We cannot give them an inch of room to declare victory – the biggest mistake the movement could make would be to back down now.

Pushing through this defeat will mean soberly explaining exactly what led to a victory at JFK8 and a defeat next door – namely, Amazon’s more sophisticated union busting tactics and a narrower organizing committee with less time to prepare.

Our enemies learn lessons from defeats. Amazon knew that a second ALU victory at LDJ5 would spread like wildfire. They threw absolutely everything they had to defeat the union, including resorting to intimidation, lies, and gaslighting. They took all their union busters from JFK8, walked them over to LDJ5, and then hired on more. This means the floor at the facility was literally crawling with union busters in disguise as workers.

The LDJ5 organizing committee did impressive work in fighting for a victory, though they had less lead time to ramp up the campaigning in their own facility because they correctly focused for weeks on the campaign at JFK8. They had to adapt the strategies from JFK8 to a new facility, one with very different conditions (shorter shifts, mostly part time workers, and different productivity trackers), and they had to do this on a very condensed timeline. Unfortunately, due to the high pressure nature of the situation, there were some missed opportunities to expand out the organizing committee and activate strong supporters in the facility. It’s absolutely critical the movement does not become an internal firing squad in the face of a loss but instead draws a balance sheet of these missed opportunities in order to strengthen our forces for the next battle.

The victory at JFK8 was won inside the facility through relentless break room occupations involving workers from all racial, ethnic, and national backgrounds and a concerted effort to disrupt union busting meetings. There were about 20 workers at JFK8 who could be regularly found talking to their coworkers inside the facility. This is the approach we’ll need as we take the fight to facilities across the country.

The crucial next step for the ALU will be to throw all their energy into defending their victory at JFK8 from Amazon’s attempts to overturn it, gearing up to win a strong contract, and spreading the movement nationally. This will mean mobilizing the hundreds of Amazon workers across the country who’ve reached out to ALU about organizing their workplace.

After the historic victory at JFK8, ALU correctly put out a call for a national organizing conference in late June. At this stage of the struggle, ALU can play an essential political role in the movement, defending the invaluable role of clear demands, naming a boss like Jeff Bezos as the enemy, emphasizing the importance of rank-and-file leadership, and modeling how a healthy union should be built, like for example ALU’s constitutional clause that union officers earn no more than workers they represent.

In ALU’s efforts to avoid replicating the mistakes of the existing labor leadership, it’s entirely understandable that there are hesitations about hiring staff and professionalizing finances. However, without a strong organization, the key political lessons of ALU’s victory can be isolated as larger unions like the Teamsters enter the fight against Amazon with a more conventional and less militant approach.

Other unions and the wider working class should be mobilized directly into the struggle. Unionized workers at UPS and the USPS handle a third of Amazon’s deliveries, and if ALU calls a strike to force Amazon to the table, these workers can “refuse to cross the picket lines” in the form of refusing to deliver packages that fuel Bezos’ profit making machine. In addition, wider protests in coordination with striking workers can gum up the few lanes of road that most of Amazon’s goods travel past. We should at some stage set our sights on targeting Amazon’s corporate headquarters in Seattle.

Socialist Alternative is proud to stand shoulder to shoulder with the ALU to defend the victory at JFK8, and do whatever it takes to spread the movement across the country!