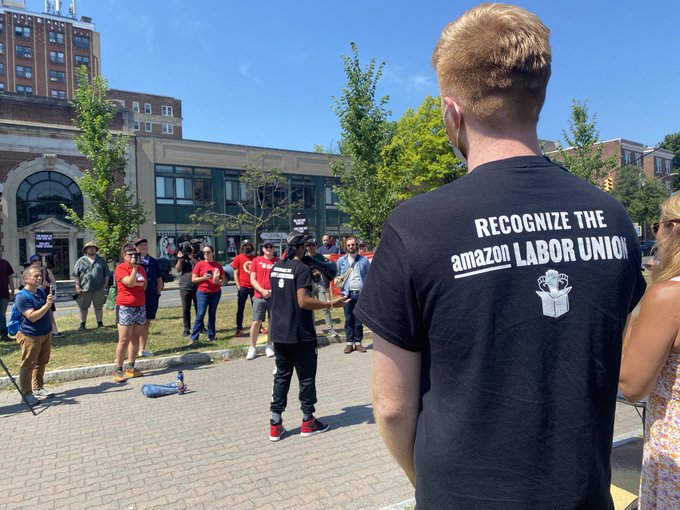 Round three in the fight between Amazon and the newly-formed, independent Amazon Labor Union (ALU) and Amazon has started at the ALB1 fulfillment center outside of Albany, NY. The union has submitted cards from a majority of the 400 non-seasonal workers at the warehouse, though Amazon could try to challenge that number to try to delay the election. Amazon knows the stakes are high: a second defeat could discredit ALU at a critical time, while a second union victory hundreds of miles away from Staten Island could embolden Amazon workers everywhere.

The ALB1 election is happening at a key moment. In the last few weeks, workers in Campbellsville, Kentucky, and the largest facility in the country in Nashville, Tennessee, announced they were collecting union cards with ALU. Hoping for an early victory, Amazon fired the leading organizer in the Campbellsville campaign. Amazon has also gone on an illegal firing spree at JFK8, which started before the union election, but has continued afterward, and recently reached central members of the JFK8 union drive. There, Amazon’s goal is to slowly whittle down ALU’s strength while endlesslessly delaying contract negotiations.

However, these struggles are happening at a historic moment when the possibilities to organize the unorganized are greater than anytime in recent memory. Polls show sixty-eight percent of Americans support unions, the highest since 1965. COVID followed by out of control inflation is radicalizing working class people. The high number of job openings has also given workers a degree of confidence to push for something better. However, these relatively favorable tailwinds for union organizing need to be combined with the correct tactics and strategy to unionize Amazon across the country, starting with a victory at ALB1.

In April, ALU stunned the world, including Jeff Bezos, by winning the first union election against Amazon at the JFK8 fulfillment center on Staten Island. The victory at JFK8 was won inside the facility through relentless break room organizing, involving workers from all racial, ethnic, and national backgrounds and a concerted effort to disrupt union busting meetings. There were about 20 workers among nearly 9,000 total workers at JFK8 who could be regularly found talking to their coworkers inside the facility.

This level of worker involvement was possible because they built a strong organizing committee of dedicated workers, which met regularly to democratically plan all aspects of the campaign, develop clear demands, and confront Amazon’s lies in the union busting meetings. They also worked together to ensure someone was talking to co-workers at every shift, even if this meant coming in on days off, and other sacrifices. Without this team, and this over-the-top effort, JFK8 would have lost.

The foundation of every organizing committee is a clear set of demands that can unite workers behind a strategy to win the union. Demands should address the immediate workplace issues –  wages, benefits, and safety – of workers of all different genders, ethnic or racial backgrounds, and job categories. At the JFK8 warehouse, ALU unapologetically called for a $30/hr starting wage, volunteer overtime rather than mandatory overtime, ending the brutal ‘Time Off Task’ system, and more. It’s not enough to talk abstractly about the benefits of a union like “respect and dignity” or “a seat at the table”.

ALB1 workers know what they are fighting for. Besides key issues like pay and benefits, ALB1 workers have been quoted talking about important issues of workplace safety, like repairing dilapidated “pick aisles”, racks where the company stores merchandise. In addition, ALB1 is known as a “XL” facility because it exclusively handles packages that weigh more than 50lbs. Workers point out that improper taping and Amazon’s extremely varied pace of work cause injuries. There are probably more issues which could be distilled into a clear list of demands that can be easily found on the ALB1 social media accounts.

ALB1 workers and their issues should also be featured more on social media and given more prominence than high-profile New York city organizers. There is nothing wrong with highlighting that ALU represents a key part of a growing national (and international) movement of Amazon workers – but, it’s essential that the union drive emphasizes team leaders who can represent the whole workforce at ALB1. Amazon’s union-busting already emphasizes the union as an “outside force”, and developing the public profile of a wider layer of ALB1 activists is essential to contracting this.

Less than a month after their breakthrough victory at JFK8, ALU suffered its first major defeat when Amazon struck back at LDJ5. They had to adapt the strategies from JFK8 to a new facility, one with very different conditions (shorter shifts, mostly part time workers, and different productivity trackers), and they had to do this on a very condensed timeline. Unfortunately, due to the high pressure nature of the situation, there were some missed opportunities to expand out the organizing committee and activate strong supporters in the facility.

Amazon learned lessons from its defeat at JFK8 too. Amazon knew that a second ALU victory at LDJ5 would spread like wildfire. They threw absolutely everything they had to defeat the union, including resorting to intimidation, lies, and emotional manipulation. They took all their union busters from JFK8, walked them over to LDJ5, and then hired on more. The floor at LDJ5 was literally crawling with union busters in disguise as workers. Without a politically and organizationally strong committee of pro-union workers to fight back, these union busting efforts had a stronger effect on LDJ5 workers.

Amazon ramped up the union-busting at ALB1 from the very beginning. They’re not playing by the rules. Amazon has selectively enforced its arbitrary “unpaid time off” labor management system to fire key union organizers. Managers are also aggressively confronting union organizers on the shop floor and the break areas. Amazon has hired lawyers to make confusing calls to workers in an attempt to cast doubt on the union before the election has even started. With a strengthened campaign that can swiftly respond to management’s attacks, these union-busting tactics can radicalize workers: why would Amazon fight so hard against the union if Amazon also claims the union won’t help workers?

Workers need to see that the union can respond to these union-busting tactics in real time on the shop floor, not months later in the courts. This means the union drive needs to be prepared to hit the bosses where it hurts the most – their pocketbooks. This can range from marching into the manager’s office with co-workers facing a disciplinary meeting, threatening to walkout and shut down production in response to a retaliatory firing, or even organizing a prolonged strike to force the boss to recognize the union (and sign a strong contract). The lunch-time walkout at ALB1 in late July in solidarity with an Amazon worker’s death in New Jersey is an excellent example of the kind of approach that is needed.

The Broader War To Build ALU

Both Jeff Bezos and Amazon workers across the country will be watching the results of the election at the ALB1 fulfillment center. A win at ALB1, a rural facility hours away from Staten Island, could lay the basis for a wider effort to unionize Amazon across the country. Similarly, a defeat would embolden Amazon to crush any signs of new organizing at other facilities and focus even more union-busting firepower on the JFK8 facility, further dimming hopes of a contract victory there.

It’s excellent that ALU organizers from JFK8 have visited ALB1 twice now to support union card-collection efforts, but they can play a decisive role by using their authority from the JFK8 victory to promote the methods they used to win:

✪ The importance of having clear strong demands, like a $30/hr base pay, volunteer overtime instead of MET, ending Time Off Task, and more.

✪ The need to have a strong, democratic Organizing Committee of workers that represents every shift, department, and ethnic and linguistic group.

✪ The need to be unapologetic about the difference between workers and the boss, highlighting the obscene wealth of mega-billionaires like Jeff Bezos and confronting management in the anti-union meetings.

The rest of the labor movement cannot sit on the sidelines and watch. With the Teamsters ramping up for a potential strike of over 350,000 workers at UPS in 2023, there is real potential for workers across the logistics industry to coordinate walkouts, sit-downs, and strikes.

Unionized workers at UPS and the USPS handle a third of Amazon’s deliveries, and if ALU calls a strike to force Amazon to the table, these workers can “refuse to cross the picket lines” in the form of refusing to deliver packages that fuel Bezos’ profit making machine. In addition, wider protests in coordination with striking workers can gum up the few lanes of road that most of Amazon’s goods travel past.

Socialist Alternative is proud to stand shoulder to shoulder with ALU at the ALB1 facility, and do whatever it takes to spread the movement across the country!