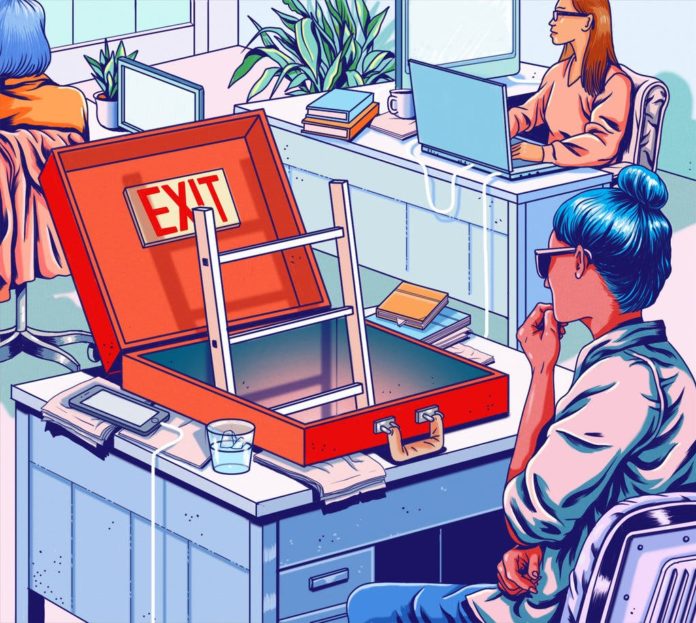 Are you thinking about quitting your job? You can’t stand one more day working under the thumb of your manager, you’re not paid nearly enough to deal with the demands of unruly customers, and there’s no room for you to grow at the company anyway. If this sounds like you, you’re part of the 95% of Americans thinking about throwing in the towel at work and the four million a month actually doing it. Fall 2021 is seeing the highest quit rates ever recorded in the U.S.

In the “reopened” world, there are new, unique pressures in our workplaces. New safety protocols (or no safety protocols), staffing shortages, increased need in the care sector. But this alone doesn’t explain today’s mass resignations.

The past 18 months of rolling lockdowns completely transformed our “work” landscape. For those traditionally essential and newly essential workers, pressures grew to unbearable heights. The great PPE scramble left nurses wearing garbage bags while treating an illness we didn’t yet understand. Grocery workers ran around at breakneck pace stocking and restocking shelves as customers panic purchased toilet paper and canned food. Amazon warehouse workers, ruthlessly surveilled by management, were forced to work until some of them quite literally buckled under the pressure. For essential workers with kids at home, securing childcare became a constant source of stress (or even an impossibility).

On the other side of things, millions of workers were thrown out of their workplaces either as a result of mass layoffs in low wage service and hospitality jobs, or through an overnight transition to remote work. What started as a “two week anomaly” turned into months and months stuck in the house. This came with its own unique pressures, especially for working parents who now had to juggle their kids’ at-home learning with the demands of their own work.

For those millions of low wage workers who were pink slipped in March or April of 2020, there were several months of enhanced unemployment benefits that softened the blow. But looming in the background was the nagging anticipation that they’d soon be forced back into unsafe restaurants, bars, and hotels as businesses were desperate to reopen their doors and jumpstart profit making.

The pandemic threw cold water on any remaining illusion that capitalism can deliver us a safe, democratic, or equitable world. It exposed the incompetence of government institutions, the deeply unequal distribution of resources within and between countries, and just how little control ordinary people have over our own lives and circumstances.

In this profoundly unstable context, and with many millions of Americans having experienced such a dramatic shift in their work and home life over the past year and a half, it’s no surprise 95% of workers are considering quitting their jobs. This is Marx’s theory of alienation playing out before our eyes.

Under capitalism, nearly every single workplace is a dictatorship of the boss. When you’re scheduled for a shift, what you’re paid, how long your break is, who you serve, what you serve, what you produce and how you produce it. Even in unionized workplaces where you have remarkably more say in your working conditions, you’re still ten degrees of separation away from any executive decision making.

Karl Marx wrote in 1847: “The worker, who for twelve hours weaves, spins, drills, turns, builds, shovels, breaks stones, carries loads etc. – does he hold these twelve hours… to be a manifestation of his life, as life? On the contrary, life begins for him where this activity ceases.”

Under capitalism, we are so disconnected from the fruits of what we produce that we become separated from our humanity. This is what millions of workers have subconsciously or consciously come to realize in the last year and why millions are throwing in the towel. We are yearning for control over our lives, to work for wages we deserve, under conditions we’ve negotiated, and for hours that guarantee we have time to do the things we love with the people we care about.

Quit or Fight Back?

It is a product of the immense weakness of the organized labor movement that millions of workers see quitting as their only form of workplace “activism.” Screenshots of workers telling off their managers as they quit have gone viral, tapping into many of our fantasies to do the same.

But the tragic reality is that as long as we live under capitalism there is no “quitting” exploitation. For every one of the four million workers quitting a month there aren’t four million fulfilling, well paid jobs waiting for them. We cannot “escape” our way out of long hours, low pay, bullying managers, and meager benefits.

But, as workers who create all the wealth in society and deliver mega-profits to the bosses, we have enormous potential power to fight in our own interests. We can look to the tens of thousands of workers on strike right now, fighting for a raise, for shorter working hours, for a real meal break, against brutal two-tier employee systems, and against staff shortages as an example of this.

Ten times out of ten the bosses would prefer we quit than fight back. They know that if we’re organized, and if we act together, we can shut down their profits. Instead of mass resignations, we need mass unionization campaigns across the country to organize the vast majority of American workers who aren’t in a union. We need a fighting labor movement with militant, rank and file leadership.

We are in a fight for our lives, and rather than concede to the bosses, we’d better arm ourselves with organization and determination – not resignation.