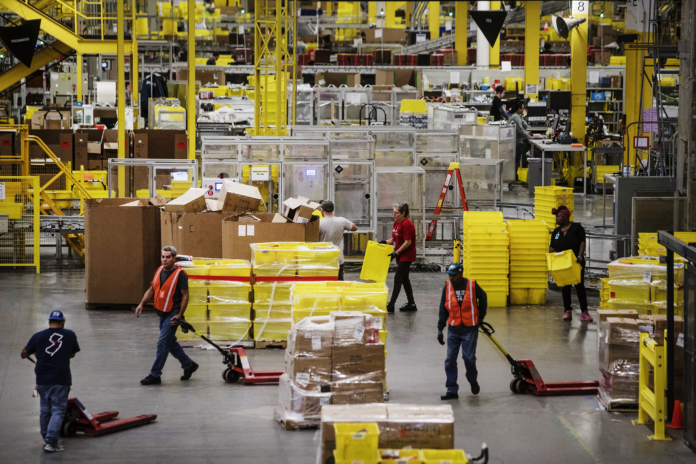 The victory of Amazon workers in unionizing the Staten Island fulfillment center JFK8 is a titanic one. With this stunning achievement, the newly-formed Amazon Labor Union has won a union for more than 8,000 workers at once, and set the crucial precedent that with the right strategy, Amazon’s legendary union-busting can be decisively defeated. Despite a loss at neighboring sort center, LDJ5, the fight to unionize Amazon is still very much on.

But the magnitude of this victory is not only numerically great. Amazon workers, in the heart of the logistics industry, occupy a core arena of U.S. and world capitalism.

Amazon is at its core a logistics company. Amazon’s profit stems from its domination of its own workforce to deliver goods at the fastest speeds possible. This is also true of Walmart and other major retailers who import, sort, warehouse, and deliver massive amounts of merchandise. With offshoring and automation, the social weight of the working class has shifted to a large degree from heavy industry and manufacturing (such as the auto makers) to the logistics sector. The growing importance of the logistics industry has only been matched by its growing vulnerability, as exemplified by immense shipping delays and by the impact of the Ever Given cargo ship temporarily blocking the Suez Canal.

The U.S. logistics industry employs at least 10 million workers. The labor force is occupationally diverse: dockworkers, railway workers, truckers, shipping clerks, and letter carriers are its traditional core. However, with the development of just-in-time delivery, warehouse workers have joined their ranks as their job sites have shifted from storing goods to making goods flow through garage doors and conveyor belts at breakneck speeds. Logistics is also not carried out solely by behemoths such as Amazon and UPS, but in any firm that employs shippers and receivers to manage smaller flows of goods. While logistics was neglected as a source of profit until the 1970s, it has now become central to modern capitalism.

The logistics workforce has also become increasingly diverse demographically. Some traditional sectors, such as trucking and railways, remain mostly worked by white men. Women and people of color, however, have been brought in by the increasing importance of warehouses dubbed fulfillment centers. Amazon in Minneapolis for example targeted the East African immigrant neighborhood of Cedar-Riverside as a pool of labor, the resulting tension being a source of working class organization.

Some logistics sectors and enterprises are unionized, such as the coastal ports, the railways, some trucking firms, the US Postal Service, and UPS, but much of it remains unorganized. This includes Amazon, Walmart, Home Depot, and other major retailers, FedEx, as well as most of the trucking industry, both in the ports and over-the-road. The vulnerability to union organization in each company and sector varies drastically due to factors such as demographic makeup, working conditions, and position within the supply chain. That is to say, Amazon warehouses will likely prove easier to unionize than its sprawling third-party contractors who do the company’s last-mile delivery.

Amazon’s workforce is a massive 1.1 million, twice the number of workers they employed in 2017. This number is even bigger when the 100,000+ delivery drivers are included. While technically hired by third-party contractors (Delivery Service Providers, or DSPs), they use leased Amazon vehicles and are subject to the company’s stressful working conditions.

While Amazon has increasingly taken over its own deliveries, it continues to use delivery services such as USPS, whose new workers have had their traditional Sundays off-work stripped from them in order to deliver Amazon packages. Overall, Amazon claims that over 1.6 million jobs are “indirectly supported by Amazon’s investments in areas like construction, logistics, and other professional services.” Amazon employment can also be disproportional, such as employing 2% of residents in poverty-stricken Bessemer, Alabama. When the customers are included, Amazon’s reach is made clear: by some estimates, over 70% of US households have Prime subscriptions!

The fight to unionize this industry will be a critical project of the labor movement over the coming years. With their enormous levels of social power, the successful organization of logistics workers – particularly if done on a militant, class struggle basis – could bring the entire industry to its needs.

ALU’s victory in Staten Island is just the first step, and it holds important lessons in how new organizing efforts can and must find success. ALU led with bold demands like a $30/hr starting minimum wage and abolishing mandatory overtime, giving workers something to fight for and a reason to unionize. Tactics such as the in-breakroom tabling by off-shift workers is an important innovation, and Amazon workers will need to come up with more ideas to spread unionization across its vast network of fulfillment centers, sort centers, and delivery stations.

Another fight in logistics is also starting to ramp up: contract negotiations between over 260,000 Teamsters and UPS. Joint organizing and action at Amazon and UPS would strengthen working class solidarity and could prove critical to winning strong contracts at either company. ALU’s victory comes at the same time as a rapid unionization campaign at Starbucks, demonstrating how broad the desire for better conditions at work is right now among American workers. In the coming months, workers both within the logistics industry and across industries will have to share tactics and strategies in order to win the strongest possible contracts.

Socialist Alternative argues that Amazon should be taken under public ownership and democratically run by the working class. Right now, the logistics industry is managed for the sake of profit. This means that workers are ruthlessly exploited to ensure that goods are delivered within two days or on the same day, regardless of how much workers are overexerted and injured to match the pace and regardless of the specific merchandise purchased. Instead, the working class should benefit from the networks they have built for Jeff Bezos and his shareholders.

During the early days of the COVID-19 pandemic for instance, Amazon’s network, and the retail and logistics sector as a whole, should have prioritized the delivery of PPE and essential goods at reasonable prices. Instead it served as a source of record profit for shareholders. At the same time, logistics and retail workers should not have been pummeled by the even larger than normal volumes in worksites already prone to the spread of COVID-19! A democratically-planned economy would balance the need for safe working conditions and ensure the community received the essential goods they need to survive.

As socialists have argued, the sources of profit and domination by the logistics sector are also its vulnerabilities.

One, Amazon’s promise of same-day and two-day delivery to over half the adult U.S. population makes it brittle in the event of a strike, even in just a single warehouse that may supply an entire metropolitan region. Chokepoints are rife throughout the U.S. logistics network, such as the LA ports unloading 40% of all imported goods or employing over 14% of Memphis workers. (Amazon is surely building out its network to be more robust.)

Two, its harsh working conditions such as shift lengths and pacing means that workers are more willing to organize and even unionize, but the resulting high workforce turnover rate presents a difficult but surmountable problem.

Three, although Amazon is making itself more independent of other logistics firms by delivering more of its own merchandise, the company also negatively affects other sections of the working class, some of them unionized, such as postal workers and dockworkers. Furthermore, the more of its own shipping that Amazon takes over, the fewer workers they could potentially use as scabs to send deliveries through in the event of a strike.

Just as Amazon has an enormous role in the world economy, 8,000 unionized workers in one fulfillment warehouse have enormous power as well. Should the workers lead an effective enough strike to shut the warehouse down, the ripple effects would be profound – more than 2.4 million Amazon packages are delivered in New York City every day. And given Amazon’s famed capriciousness when it comes to the quality of life of their workers, it’s overwhelmingly likely that action to stop the flow of profit will be necessary to win concessions in a first contract.

Amazon is a behemoth company. Its founder, Jeff Bezos, is synonymous with the cruelty of wealth, and the institution itself is perhaps most famous for the abysmal working conditions of the people who make it run. It is in this context that the victory at JFK8 can’t be underscored enough – not just because the campaign overcame the legendary union-busting of one of the pillars of the American economy, but because now these 8,000 workers can use the lever of this economic power to their advantage.