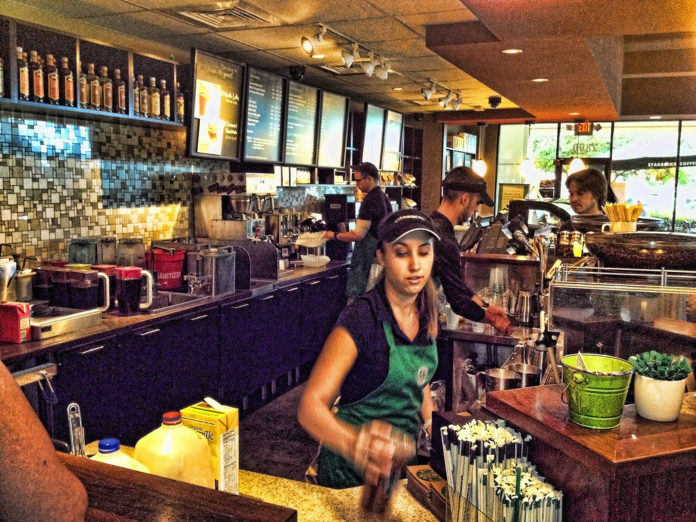 I’ve worked as a barista at Starbucks for the past three years and have been absolutely inspired by the wave of stores fighting for unionization – this is something we need in all stores across the company. A union is the workers coming together in an organized way to fight for the things that we need the most. And for all of the shortages we’ve experienced over the past year there’s really no shortage of ways that we can improve our time at work. What exactly are the kinds of things that we can win with a union?

$20 Hourly Base Pay Tied To Inflation

Starbucks CEO Kevin Johnson saw his compensation shoot up to $20.4 million last year. When was the last time Kevin Johnson worked a short-staffed floor during happy hour? When was the last time his manager texted him to come in at six in the morning? The truth is he wouldn’t have made a dollar if we weren’t putting in the hours, and in return we deserve a living wage. I love being a barista and after years of experience I’d say I’m pretty good at it. There should be no reason for me to be putting in the kind of effort that takes and still be worrying about where my rent money will come from.

We have the proof that the money is there – two years ago we were given an extra $3 an hour in hazard pay to entice people back to work during a pandemic. Now the pandemic is still here but that three dollars is nowhere to be seen. At the same time, the cost of living has been going up dramatically. Starbucks, like businesses everywhere, is planning more price increases this year in the face of inflation. A rise in the cost of living means that our paychecks are worth less than they were a year ago. How much we are paid should be tied to the rise in living costs.

If Kevin Johnson can take home $20 million then we can fight for and win a $20 an hour starting wage tied to inflation. This needs to be further scaled to seniority – our past raises shouldn’t be erased in the process – and pre-tip of course. (By the way, when are we getting tipped on card transactions? It’s 2022, Kevin.)

An End To Benefits Audits – High Quality Health Care For All

The most important thing about working at Starbucks to me and what has kept me there for years is the health benefits. Especially when it comes to gender affirming care, the plans on offer are already above industry standard. It’s actually well known in the wider trans community that this is a place to work if you need a way to access often unaffordable but still essential procedures. At this point we should expect nothing less, but why is it gatekept behind an audit? As it stands, we need to maintain an average of 20 hours a week to qualify, but especially during certain seasons hours are often cut with the excuse that it’s for the needs of the store (more on this in a second).

When I take a needed vacation I’m put in a position of having to do the math on my hours. Have things been tight at my store recently? Have I already only been getting 17 hours on the schedule some weeks? If I take a week off to enjoy my life am I going to risk disqualifying for health benefits when the audit period ends? We work hard for this company and should never be put in a position to ask questions like these. We need to push for the extension of health benefits to everyone working at Starbucks. High quality health care – including mental health care and gender-affirming health care – has to be understood to be an essential part of what we expect from the bosses for the fortunes we’ve made them.

When it comes time for a cut in hours, the phrase I’ve heard now from multiple managers is that it’s “for the needs of the store.” Starbucks made $5 billion in profit last year and to keep increasing that they’ll squeeze every last dollar they can out of our pay. Slow business seasons should be the cost of doing business for the company, not for the workers. We should never be the ones paying the difference in income. We need to push for guaranteed hours that, paired with a $20 base hourly pay, equal a living wage. When a new employee is hired and they’re told they’ll be given 30 hours a week, they need to be given 30 hours a week, not 25, not 20, not 10. It’s time that the needs of the baristas are given the same importance as “the needs of the store.”

Corporate messaging is constantly pushing the idea that we are a “third place” for customers and workers alike and that the company is seeking to “nurture the human spirit.” It needs to be clear that when it comes to the needs of their workers the first thing they are going to look to nurture is their bottom line. We have already seen an instance of illegal retaliatory action taken against workers trying to assert themselves through a union drive by firing the entire seven-worker organizing committee in Memphis. When workers organize across this company there should be no space for any of us to lose our jobs without going through the union. When this does happen, the attack on one of us will be met with a direct response from all of us. Let’s make the old labor saying a reality: an injury to one is an injury to all.

Winning Union Recognition and Beyond

This should in no way be seen as a definitive list of what we need to improve our working conditions. What do you think we need to fight for? We should be asking our coworkers that question, discussing out the best ideas, and making it clear that this is why we need a union, because the only way we are going to win what we need is by fighting together. The way we are going to fight together is going to be by winning a union across every store in this company and, beyond that, winning a strong first contract. To do that we need to be concrete about what this is all for. Starbucks is one of the most successful companies in the entire world and that is because of Starbucks workers. It’s time we demand more.