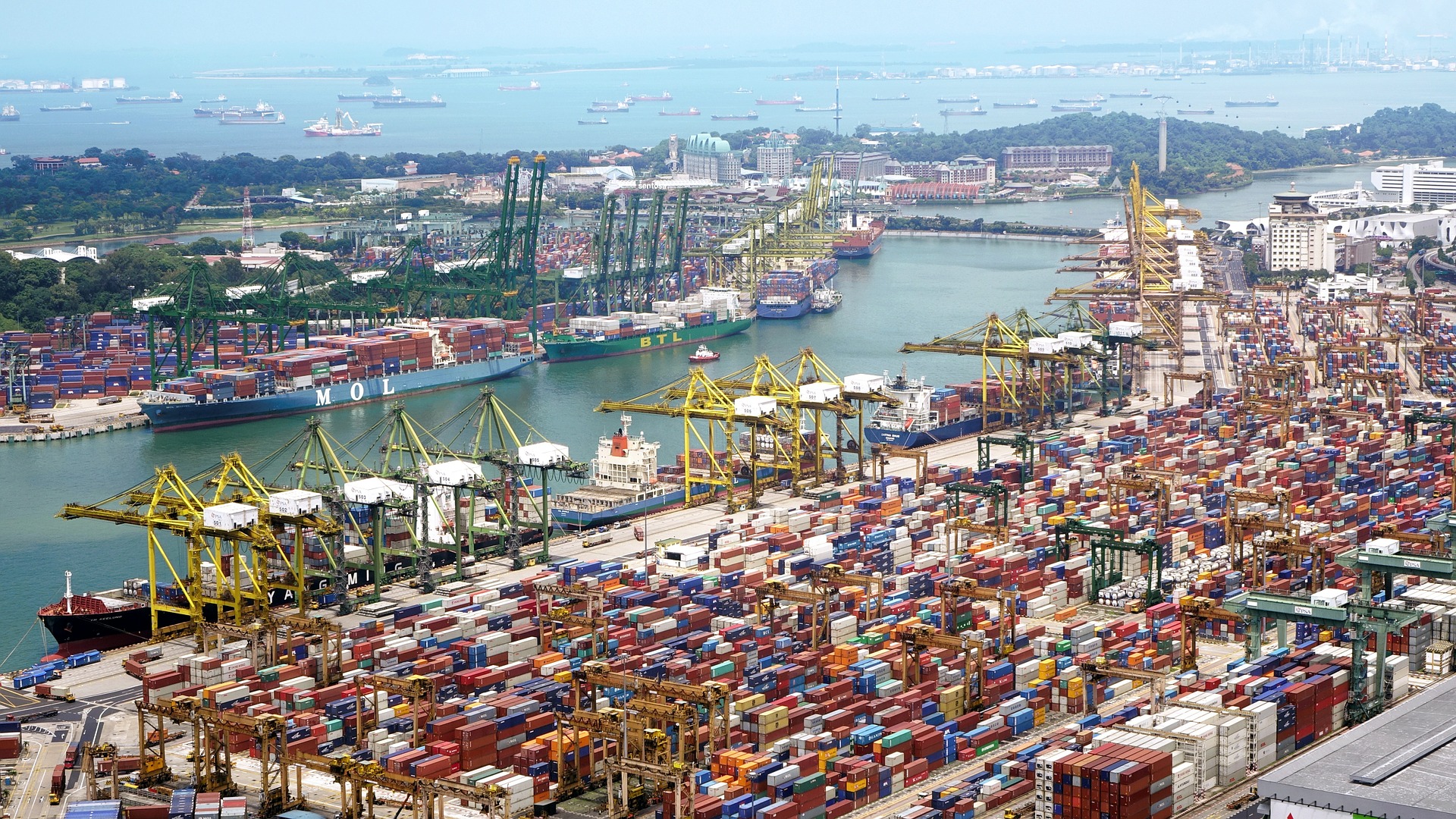 As highlighted by the emergence of Amazon and Walmart as corporate giants, the so-called “logistics revolution” has reshaped global capitalism over the past few decades. A new, streamlined distribution system has overturned the traditional methods of storage and sale.

Instead of retailers warehousing huge amounts of goods for sale over the long-term, they receive and sell their goods “just-in-time.” Walmart sells their merchandise within days of its receipt. The world’s corporations and workers are tied tighter than ever before, giving the labor movement immense leverage over big business, as signaled by a strike authorization vote by 260,000 Teamsters at UPS.

Logistics and the Logic of Capitalism

The planning and control of the movement and storage of goods – a general definition of logistics – was a long-neglected sector until the post-World War II economic boom began to fade in the mid-1970s. Capitalists, such as Walmart’s Sam Walton, scoured their operations in search of new sources of profit. With a slew of technological, organizational, and productive innovations within a neoliberal political regime, the logistics revolution was born.

A major reason for its previous neglect was that the legal framework placed strict regulations on shipping, trucking, and rail. The first container shippers (such as Sea-Land) had to use financial and legal tricks to operate its first ship! Feeling strangled by regulations and seeing profits about to be squeezed by the slowing of the world economy, capitalists used the oil crisis of the early 1970s to pressure the federal government to “liberalize” the transport industries.

This deregulation began in earnest upon the political ascendance of neoliberalism with the 1976 election of Democratic President Jimmy Carter, who focused on the rail and trucking industries. Other legal barriers were removed by Reagan’s and Clinton’s undermining of unions, support for free trade, and attacks on anti-trust regulations. Corporations were thus free to reshape the global movement of capital via logistics – the planning and control of goods from the point of extraction and production to the point of sale.

Walmart, the world’s largest private employer, and Amazon are essentially logistics companies. With mechanized, bar-coded inventories, they coordinate the global movement of goods with precise, instantaneous information. This information has shifted the balance of power within supply chains: instead of manufacturers pushing their goods onto retailers, retailers pull goods from manufacturers. Rather than retailers storing large inventories of the commodities that manufacturers predict consumers will demand, the retailers make orders based on their large inventories of real-time data. Walmart’s and Amazon’s knowledge of consumer demand combined with their market share allows for “just-in-time” delivery to warehouses, retail outlets, and consumer doorsteps. Walmart may only carry a single item for a couple of days between its arrival in a warehouse and its purchase. Fordist mass production controlled by the giant manufacturers has given way to the just-in-time delivery systems of the retailers.

This is facilitated by the shipping container, one of the past century’s most important inventions. While allowing the volume of a single shipment to explode, it also erased much of the labor-time required to load and unload a given amount of cargo, long recognized as the point of highest cost in shipping. Today’s ships are at least eighteen times larger than those in 1970 but may have fewer than 25 crewmembers. Under the former bulk-break system, 10 dockworkers could load 10 tons of cargo per hour, but now 10 dockworkers can load 400-500 tons per hour (Bonacich & Wilson, p. 177). Logistics has indeed been revolutionized, with serious implications for labor.

Kim Moody in his excellent book On New Terrain (see our review here) points out intense geographical, labor, and market concentration in “logistics clusters,” dominated by a few coastal ports and interior hubs. Los Angeles/Long Beach (LA/LB) alone accounted for 38% of U.S. imports in 2016. The number of logistics workers, including warehouse workers, in Chicago, Los Angeles, and New York exceed 100,000. In Memphis, the major hub of FedEx, there are 200,000. Many of the workers are poorly paid and employed through temp agencies, pulled from what Marx called “reserve armies of labor” (Moody, p. 61). Unlike many other sectors of the economy, logistics clusters are fixed geographically due to their use of long-lasting roads, rails, ports, and massive warehouses.

Infrastructural concentration, combined with corporate mergers, have left rail, trucking, package delivery, grocery, retail, food distribution, and ocean shipping controlled by a handful of corporations. Such concentration has not only occurred in the distribution of goods, but also in their manufacture. The number of parts suppliers to automobile companies, for example, has fallen from 1,000 to 300-600 over the last two decades, according to Moody (p. 65). Initially centralized around Detroit, auto companies have established themselves throughout the South, taking advantage of lax labor and tax laws in a region of low union density.

Supply-line links prior to retail distribution are particular vulnerable. For example, a disruption in the transport of a single auto part can prevent a car’s or truck’s final manufacture entirely, from the door to the glove box. This applies to all complex goods resulting from numerous supply chains, including smartphones and computers, vehicles, and machines.

As Moody emphasizes, these forms of capital and labor concentration have produced physical and economic choke points, “stationary target[s] for unionization and collective action.”

In total, Moody estimates that logistics employs between 3.5 and 4 million workers in the U.S. 20% of these workers are in warehouses, their conditions made well-known by exposés of Amazon (Moody, pp. 60-62). Drayage truckers who work the short hauls of goods between the docks and railways, face contingency through independent contracting, racial discrimination, and aging equipment. Sailors face similar social conditions – a staggering 25% of the world’s 1.5 million sailors are Filipino. Precarity has increased all along the supply chains, especially as layers of employers, borders, and language barriers prevent workers from making demands of the retail giants that control their conditions.

Yet logistics ties the world’s workers tighter than ever before. Although they may be divided by borders and sea, culture, language, race, and gender, the supply chains that capital has constructed facilitates united working-class action. The relationship between workers in Asia and the U.S. is not solely production by the former for consumption by the latter; instead, workers add value from point of production to point of sale.

As architect Jesse LeCavalier writes in his book on Walmart, logistics, and architecture, logistics’ “ideal condition [of logistics] is to have all … merchandise suspended in a constant state of circulation, a humming network of movement with no backups, no bottlenecks, and no accumulation of storage” (The Rule of Logistics, p. 6). To this end, Walmart supplies a region’s retail outlets continuously through immense Distribution Centers (DC). It is estimated that its Bentonville DC – the size of 21 football fields – turns over a staggering 90% of its goods every day. This statistic alone signals the potential power of the working class to disrupt Walmart’s already thin profit margins.

In many ways, corporations have left themselves vulnerable to disruptions on their own accord. For example, in September/October 2004, a 10% increase in shipping traffic clogged the supply chains, creating massive jams at the LA/LB ports (Bonacich & Wilson, pp. 119-121). There were not enough longshore or rail workers to transfer the goods, the railroads lacked a sufficient amount of equipment, and truck drivers refused to wait for the long delays. Such autumn jams worry the retailers, whose demands for just-in-time delivery in turn entail seasonal fluctuations with a major peak at Christmas. The science of logistics is dedicated to lubricating the supply chains and capital is well aware of their sensitivity. It remains for labor to take advantage of these weaknesses.

Although major unions occupy the ports (ILWU), trucking (Teamsters, especially at UPS), and the railways, working-class power within logistics remains mostly untapped, although there are signs of change. Drayage truckers at LA/LB in California are unionizing through a corporate-labor partnership. Although UPS and Teamster officials have now reached a “handshake agreement,” the 260,000 rank-and-file had Teamsters voted overwhelmingly to authorize a strike against UPS should negotiations fail. Following major strikes, Amazon was forced to sign contracts with unions in Italy in May and as the article was being finalized, Spanish Amazon workers called for a three-day strike. Walmarts in Chile, South Africa, and Brazil, among other places, are forced to bargain with unions. East African employees in Amazon’s Eagan, Minnesota fulfillment center are pressuring the company to allow for Ramadan activities. Cargo and ramp workers are currently waging a unionization drive at Delta Airlines.

Here in the United States, Moody argues that despite industrial off-shoring and automation, workers retain leverage over capital. Although warehousing, delivery, and sales are usually associated with the service sector, just-in-time delivery places these workers lie firmly within the realm of industrial production. Coupled with the poverty wages, poor benefits, sometimes brutal working conditions, and irregular hours that dominate the warehouses and transportation sectors, this is a recipe for future powerful, militant struggles which can cripple the logistics systems. Logistics capital is particularly vulnerable due to its own constructions, such as geographic concentration, corporate mergers, and round-the-world delivery of merchandise. Just as the modern factory socialized labor by bringing together thousands of workers in a single location, introducing the power of the industrial strike, the logistics revolution arranges workers and machines in specific configurations that introduces the power of the logistical strike. As Marx wrote, “what the bourgeoisie … produces, above all, are its own grave diggers.”