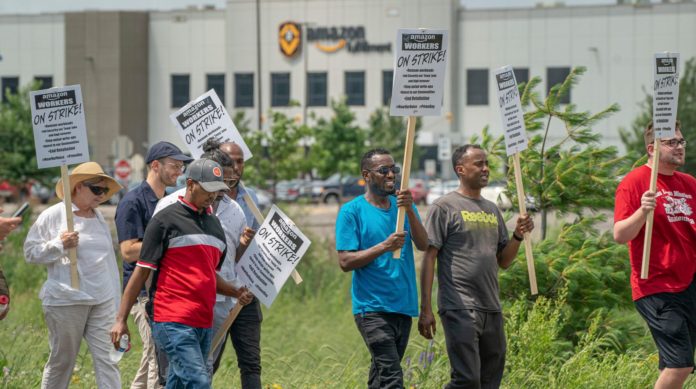 On July 15, the first day of Amazon’s “Prime Day,” workers at Amazon’s MSP1 warehouse in Shakopee, MN planned a six-hour strike to demand safer working conditions and more secure jobs. Amazon is one of the biggest companies on the planet owned by Jeff Bezos, the richest man in the world. Amazon has been part of completely changing the way the retail industry functions – relying on internet sales and logistics for rapid delivery instead of brick and mortar stores. This new retail empire depends on squeezing the most they can out of warehouse and delivery workers. Amazon workers around the world have started to fight back and the workers at the Shakopee, MN warehouse have started to bring that struggle to the U.S.

This was not the first time these Shakopee workers have organized and made demands. Many of the workers here are Somali and Muslim. In November 2018, Amazon met with a group of East African workers and made some concessions to productivity expectations to allow for adequate breaks and provided spaces for Muslim prayer while on shift. This group of workers is reported to be the first known group in the U.S. to get Amazon management to negotiate. Amazon of course denies this, instead calling it “community engagement” fearing that it will spread beyond Shakopee and embolden the MSP1 workers there to demand more.

On Prime Day Amazon promises free two day shipping for its Prime customers making it one of the busiest days of the year for them. During the walkout on July 15, workers and organizers emphasized again and again the grueling pace of work expected of them in the warehouse. The slogan that the workers have raised for over a year is, “We are humans, not robots.” These workers are facing the reality of an ever more automated warehouse that expects them to keep pace with a robot that is feeding them packages to process. And management is always around or overhead to pressure workers to fill unrealistic quotas. This can of course lead to injuries. One worker that spoke from the platform was currently on short-term disability due to a job related stress fracture in her foot.

Other issues that workers mentioned was the high turnover. The worker with the injured foot said that she started about a year and a half ago with seventy people; and only five are left. This is because Amazon depends on outside staffing agencies that hire temp workers without the benefits of a full-time worker. Workers demanded that all temps be hired to full and secure employment.

Many have a legitimate fear of retaliation. One way Amazon has been punishing workers is to deduct the time they spent during a walkout from their quarterly leave allowance. A worker only has so much unpaid leave allowance before they are fired. Workers should not be retaliated against for their right to organize.

These Shakopee workers have had their organizing efforts supported by the Awood Center, a nonprofit created to advocate for East African workers in Minnesota. It is primarily a collaboration between SEIU and CAIR (Council on American-Islamic Relations). SEIU and other unions made the July 15 walkout a major priority. They devoted a lot of their resources to flyering Amazon warehouses in the days leading up to the walkout and hosted “know your rights” meetings with prominent community members explaining that it’s okay to walkout and that they have community support. They also encouraged other unions to turn out their members.

Socialist Alternative supported the December walkout and were eager and excited to not only participate on July 15, but we wanted to help build for it. We reached out to the unions most involved and helped with their efforts to flyer the workers at the Shakopee and surrounding area warehouses during the weekend leading up to Monday’s walkout. During the walkout on July 15, we walked the picket line with the workers, successfully turning away a few delivery trucks! Socialist Alternative also produced a flyer to start conversations with those that we meant there. We also had a table with our newspaper and handmade placards. We used our time to meet as many workers as we could to get a sense from them what the mood was like in the warehouse and what their perspectives were.

Soon after arriving we quickly found out that there was not going to be as many workers walking out as expected. From the platform several speakers reported the retaliation tactics being used by Amazon. These included managers and the police standing at the exists intimidating any workers planning to walkout, and it also sent a message that management will know who does, and the expectation being hours deducted from their leave allowance or worse. Many people there expressed anger and frustration, but it was more or less accepted, apparently being nothing we could do about it. No direction was given from the main unions on what actions we could take in the face of blatant intimidation from Amazon that was stopping workers from walking out.

How to Secure Better Wages and Conditions?

We need a fighting strategy to defeat an implacable company like Amazon. The union leadership argued for a strategy of being respectable. They argued that on this basis Amazon would be more agreeable to the organizing efforts. This approach flies in the face of the fact that Amazon is ruthlessly anti-union. It is only by the workers themselves building a powerful union inside the warehouse that Amazon will be forced to respect unions. And even then, it will be a titanic battle. We used our flyer to point to how $15 was won in Minneapolis and St. Paul with workers building a fighting movement with teachers, nurses, fast food workers, and others. Organizing support from community and other workers is what it will take to win against massive corporations like Amazon. When we organize a mass movement with a fighting approach we can win, and protect our rights by standing together.

To really challenge Amazon and build confidence in the workers, unions need to be taking a very public campaign relentlessly exposing the anti-worker approach of the company. This can win the public to the side of the workers and build energetic support behind building a powerful membership-driven union. Organizing Amazon workers would be a watershed moment for labor in the U.S. and internationally. Others in the movement have already begun discussions about if labor activist, and especially socialists, should take critical jobs at Amazon warehouses like MSP1. This is something that the broader labor movement should be seriously, but carefully discussing.

The MSP1 workers that have participated in the walkouts showed incredible courage in the face of intimidation from Amazon. These workers will be the core of the force building for future actions. These workers should continue having organizing meetings to discuss the best way forward, and recruit other workers to join them. It’s only through the mass organization of these workers with strong democratic structures that Amazon’s brutal regime can be pushed back.