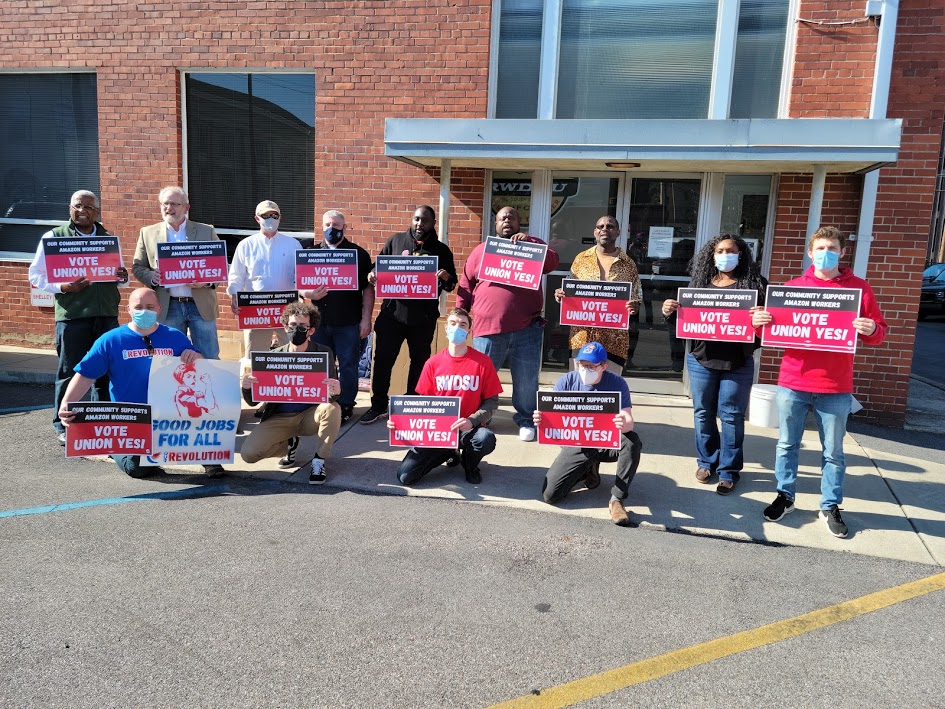 The eyes of working people throughout the nation are focused on Bessemer, a suburb of Birmingham, Alabama where Amazon Fulfillment Center workers are voting for union recognition. Over 5,800 brave workers are taking on a goliath of the modern age: Amazon and the richest man in the world, Jeff Bezos.

Amazon only opened the Fulfillment Center in April 2020. Immediately facing 12-hour shifts, electronic monitoring that tracks to the second workers’ every movement, and barely any break time, workers report collapsing on the job only to be immediately threatened by supervisors. Within months workers approached the Retail Wholesale and Department Store Union (RWDSU) about an organizing drive to form a union.

Since October, RWDSU has manned the gates of the warehouse all day and night speaking to workers as they leave. Thousands of Amazon workers at the Bessemer Fulfillment Center want a say in their working conditions and are now mailing in their ballots. Voting started on February 8 and goes until March 29, which is the deadline for ballots to be received. Go to BAmazonUnion.org for more information.

Even in Alabama, Amazon’s starting wage of $15 an hour is not enough. Many workers want to fight for $20 an hour, longer break times, an end to “Time off Task” (TOT), and overtime pay of time-and-a-half for shifts longer than eight hours.

Winning a union won’t immediately make these improvements a reality, but it would give workers the ability to struggle together to win these demands. It’s easy to see how the entire warehouse collectively demanding higher wages can win more easily than one worker asking for a raise. Workers getting organized and standing united is the best way to fight for better wages and conditions. At the Bessemer warehouse, voting in a union would be a massive victory. However, that would only be the first step. After that, a fight for a first contract could stretch out for months or years longer. Even after a contract is won, big employers like Amazon do everything they can to squeeze every last drop out of workers, and ignore or fudge agreements. Unions are only as strong as the membership is aware, active, and engaged.

Amazon’s choice of Bessemer for one of their largest warehouses in the country was no accident. They thought that the mostly Black population in the area, where the poverty rate is more than two times the national average, would be more likely to accept the punishing conditions. They were wrong. At least 70% of the Fulfillment Center workers are Black as are the leading workers in the campaign. On the heels of the Black Lives Matter uprising against racist police brutality last Summer, the message now is that Black Lives Matter at work too. Also, a majority of workers at the warehouse are women. Women, and Black women in particular, are more likely to be working essential jobs under the pandemic, and around the globe and in the U.S. have been at the forefront of battles against the bosses. Fighting racism and sexism, both on the individual and systemic level, is a crucial task for the labor movement and the class struggle as a whole. Only by doing this, while clearly showing that if workers unite across racial, gender, religious, and other lines can we build a movement strong enough to take on Amazon and all corporations for the benefit of all workers.

At some point in the future we may learn how many millions Amazon is spending to convince workers to vote “no.” The February disclosures revealed that Amazon is spending $3,200 per day per consultant to a high-powered anti-union consultant. While we don’t know how many consultants that includes, we do know of at least 10.

Just as Amazon is tracking their workers’ every movement on the line, they’re tracking union sympathies too. Socialist Alternative reporters on the ground in Bessemer were told of a female employee who was brought into a captive audience meeting with 30 coworkers. The leader of the meeting asked if anyone had ever been in a union, and this worker had. She explained she had previously been in RWDSU and thought they were good. She was immediately escorted out of the meeting, had her ID tag scanned and was never again invited to such a meeting.

Workers are subject to daily anti-union text messages, anti-union signs in every bathroom stall, and are targeted with ads on websites and social media. Amazon has also imported solidly anti-union workers from other states to walk the floor and try to convince locals that a union isn’t needed. In its anti-union content, Amazon continues to peddle lies and misinformation, making outrageous claims about dues and that nothing more can be won with a union.

The Bessemer union drive is already inspiring workers everywhere. Just at Amazon alone there is already the potential for dozens of union drives throughout the country and the world, which is exactly why they are fighting this one so hard. Millions of working people would be encouraged and inspired to organize unions at their own workplaces after seeing that Alabama workers can successfully take on the mighty Amazon.

On the Ground with the Organizing Drive

Seeing the enormous significance of this important class battle, Socialist Alternative decided we cannot merely cheer from the sidelines. A team of Socialist Alternative organizers is helping to coordinate community outreach in Birmingham and Bessemer. Working with BLM Birmingham, DSA Birmingham, RWDSU, as well as other local unions such as the teachers, ironworkers, steelworkers, and electricians, we’re canvassing in working-class neighborhoods daily with yard signs and sign-up sheets. Not only have we found overwhelming support for the union drive, many people we talk to know someone who works at the warehouse. A full 1% of the Birmingham population and 2% of the Bessemer population work at the warehouse. In nearby West Blocton, 4% of the population work at the warehouse. Amazon workers have reported being encouraged feeling that the community is behind them when they see yard signs or hear from friends who are supportive.

In addition, Socialist Alternative is producing regular reports from the union drive. Expect daily updates on Twitter, Facebook, and Instagram as well as regular updates on SocialistAlternative.org.

Excitement around this campaign continues to grow. Support from other prominent unions, the President, famous actors, and the recent visit by several Congresspeople continue to pump energy into the campaign. While the recent viral call to #BoycottAmazon shows that millions across the country want to do what they can to help the campaign, neither the union, nor Socialist Alternative view the boycott as an effective way to do so (we explain why here).

On March 20 solidarity demonstrations with the workers in Bessemer are being organized in cities everywhere. Socialist Alternative branches are helping build for these and encourage everyone to pitch in. If you’re in a union, propose a resolution of support to Amazon workers! No matter what, talk to as many family, friends, neighbors, and coworkers about what’s going on in Bessemer, AL.