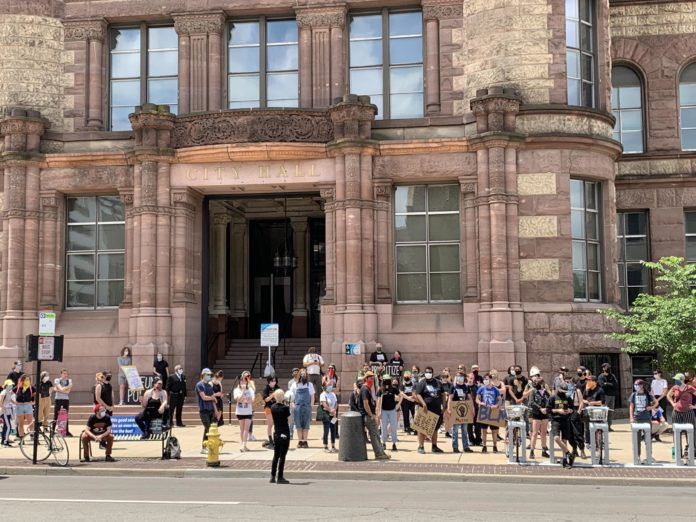 The news of Cincinnati City councilmember PG Sittenfeld’s arrest on federal bribery charges was surprising in a certain sense. What does this privileged son of rich parents and the product of Ivy league schooling need with a few thousand dollars in campaign contributions in exchange for votes on development projects? Sittenfeld, poised to become the next mayor, now asserts he was not engaging in fraud, but rather doing the normal business “bringing jobs and growth to our city that benefits the public.” He says he will fight the charges. At the very least, the description and transcripts offered by federal agents showed there was some quid pro quo–I’ll support this project and, hey, why don’t you donate to my campaign?

In another sense, this arrest is not surprising. Sittenfeld is the third member of the Cincinnati City council this year to face charges. Just a week before, “new age conservative” Jeff Pastor was arrested, and six months ago, Tamaya Dennard, arguably the most liberal member of council for some time, was convicted and is awaiting sentencing. A fourth council member, Amy Murray, resigned to accept a position in the Trump White House. Sittenfeld, Pastor and Dennard have been suspended and replaced, meaning that nearly half of our nine member council is made up of special appointments where regular people have no say. Because a right wing judge got to choose Pastor and Sittenfeld’s replacements by himself, the progressive Sittenfeld has been replaced with a Republican, meaning the council now has a somewhat rightward slant.

There has been no shortage of examples of how the council does not serve working people, and we are left with important questions. How do we stop both the illegal and legal corruption? Can working class people elect councillors who are friendly to our interests? Should we even bother trying? How do we hold them accountable?

These members of council have certainly had a rough year, but it is working class people around the country who have suffered the most from a mismanaged pandemic, police brutality, an economic downturn with completely inadequate government relief, evictions, and an ever-present climate crisis that continues to go unaddressed by world leaders.

No matter how much Sittenfeld and others want to say they are working for the “people,” he and his colleagues have no interest in actually helping working people. Most of the time they don’t need a bribe to do the developer’s bidding. They are happy to grant their developer friends money even as an affordable housing crisis rages on. Why? Because city council, and virtually any other form of government from library boards to the U.S. Congress is designed to protect the interests of the capitalist class.

During budget hearings this summer, hundreds showed up to testify in support of defunding the police department. Cincinnati Socialist Alternative members were present when David Mann, the chair of the city council, had the audacity to walk out of the meeting, ending it early before any decisions had been made on defunding the police department and despite objections from the crowd. In the end, the council kept the bloated police budget at the same level as last year. You cannot paint Black Lives Matter outside city hall and then fail to address the conditions that created the need for such a slogan to exist.

The council has allowed our city to become a veritable cash cow for developers like 3CDC. The struggle over the building of the Major League Soccer team’s new stadium last year is a typical example. Residents of the historically Black neighborhood of the West End made it extremely clear they did not want the stadium built in their neighborhood. The neighborhood community council voted against the cataclysmic development. This fell on deaf ears: city council overwhelmingly supported the building of the stadium, provided tax abatements and is even paying to build a parking garage.

The school board also had to approve the stadium’s tax credits and took a similar route. Mike Moroski, who once called himself a “voice for the unheard” in a previous city council run, voted for the payment in lieu of taxes, completely ignoring the calls of the movement. The project has already displaced residents, disrupted the learning of Taft High School students, and is accelerating the gentrification of the West End and nearby Over-the-Rhine, which is the most income disparate and expensive neighborhood in Ohio.

An understandable response to the abhorrent actions of council may be to turn away from engagement with elected bodies altogether, to focus purely on workplace organizing and mutual aid, or suggest that mass movements don’t need support from inside city hall. We think this would be a mistake.

There is a big danger that the right wing can make gains out of frustration at the status quo. Billionaire developer Donald Trump successfully did this to an extent in 2016 with the slogan “drain the swamp,” and already Alex Triantafilou, the chair of the local Repuclian party has said “throw the bums out.” The right will highlight the corruption and dysfunction of these Democratic Cincinnati council members as an excuse to shrink the size of government, further cut funding for schools, libraries, social programs, lower taxes on the rich and pass additional developer-friendly loopholes.

There is a massive opening for working class, anti-corruption candidates in the upcoming elections who run on an unapologetically working class program of ending the corrupt tax abatements, ending corporate handouts, passing rent control, taxing the super rich to fund schools, libraries and housing, and defunding the CPD by half.

These candidates cannot bear any resemblance to the corrupt political establishment that runs Cincinnati. They should be activists with roots in social justice movements, the labor movement, and working class communities. They should be clear from the start that they won’t accept a penny from corporate interests and big developers.

We should be honest that Cincinnati’s Democratic Party at worst has been actively involved in the corruption scandals, and at best has looked the other way, which is why Socialist Alternative calls for these candidates to run as independents. This will attract lots of working class people who are fed up with the two-party system and corporate politics as usual.

We will need to hold these candidates accountable once they get into office. We should hold a mass conference in mid-February to allow workers, activists and unions to democratically discuss who should run and on what platforms.

Many people relate to politics only through elections, and ceding this ground to the capitalists will limit the ability for forces on the left in Cincinnati to speak to a wide audience. Just by virtue of appearing on a ticket, socialists can gain a profile so far unheard of here. In New York, we’ve seen how Julia Salazar and Alexandria Ocasio Cortez have been able to raise ideas like Medicare for All and a Green New Deal in new areas.

We need independent voices in city hall who will both raise and fight for working class demands in a serious way. Seattle city councilmember Kshama Sawant is an excellent example of an elected official fighting for (and winning) real working class victories. Kshama is a member of Socialist Alternative and is expected to stay true to her socialist beliefs by always choosing the side of the working class in any action she takes on council. Were she to betray this, by voting to increase police funding or to support big developers, for example, the organization would no longer support her. Kshama takes only the average wage of a worker in her district, and donates the rest to social movements.

Kshama uses her platform to amplify the demands of movements, but it is the fights waged in workplaces and neighborhoods, and by other working people, that put pressure on the council as a whole to pass important pieces of legislation.

In 2018, Kshama and Socialist Alternative led a movement to tax Amazon and other big businesses. It passed after a protracted fight, but was quickly repealed by the same city council when Amazon threatened to withdraw from the construction of a new Seattle high-rise. A year later, a new Tax Amazon movement emerged after Kshama won re-election, defeating her opponent who received unprecedented sums of corporate cash from Amazon and other corporations hostile to her unapologetic working class politics. Taxing Amazon to fund social services proved to be a popular demand during the George Floyd uprising over the summer, and petitioners easily came up with the required number of signatures to put the Amazon Tax on the ballot. Feeling the pressure, the all Democrat council preempted the ballot initiative with a watered down version of the tax, which was beefed up with organized input from activists in public comment on the bill and Kshama Sawant’s interventions in the negotiations. Still, we understand that we need to fight to expand the tax further.

Another important lesson for socialists to understand is what kind of pushback to expect from the ruling class. Today, Kshama Sawant is the target of a well funded, well organized, racist recall campaign that raises a series of lies and slander as justification for her removal from council. The real threat she poses is not simply pushing for a 50% reduction in police spending or the Amazon tax, but lies in the fact that she knows how to help movements win these demands.

This is all a key aspect of what it means to point out the limitations of the council seat: we can not vote in socialism. That can only come through mass concerted action taken by the working class to overthrow capitalism. The victories socialists might win with a council seat should never betray this truth and should always point to the critical need for us to overcome, at all levels, a political and economic system we have today that is fundamentally undemocratic in nature.

At the end of November in Chicago, a DSA endorsed Alderman Andre Vasquez voted for Mayor Lightfoot’s austerity budget despite his progressive rhetoric and posturing. There currently exists no democratic means to hold Vasquez accountable within DSA. If socialists run for council, they need to be accountable to the multiracial working class movements like is the case with Kshama Sawant. These candidates need to run on bold platforms that raise demands like taxing the rich to fund affordable housing and social services, defunding the CPD by half, cancelling rent and mortgages for the duration of the pandemic and more. A leadership that is disconnected from the masses will fail them and the working people of Cincinnati cannot afford to be failed again.