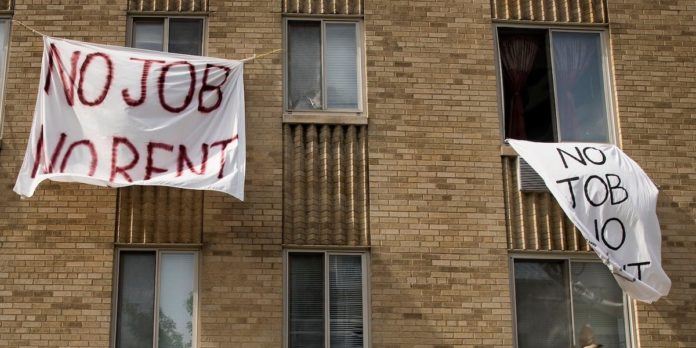 The U.S. government has not provided any relief for ordinary Americans in four months. An entire season has passed since the federal unemployment top up of $600/week lapsed for millions. Now, at the end of December, Congress is inching toward a devastatingly inadequate stimulus bill that provides minimal relief for working people, and simply kicks the can down the road on mass evictions and debt collection.

Working people and youth have upheld our end of the bargain: we stayed home, put on masks, tried to help our kids with “online learning.” Our elected officials did not uphold theirs. They played politics with our lives and withheld additional stimulus during the biggest economic and public health crisis of the past century.

The new bi-partisan stimulus bill that seems likely to pass in mid-December will do very little to stave off financial ruin for millions. Correctly, Bernie Sanders opposes this bill and is demanding something far more robust. But it’ll take more than that to win relief: the labor movement and youth need to get organized and prepare to hit the streets if our elected officials continue to twiddle their thumbs and bail out billionaires.

If the Democrats really cared about the 1 in 3 families with children that don’t know where their next meal would come from, stubborn Republicans simply would not have been enough to stop them. They would look for any avenue to win relief – including mobilizing a mass movement to target Republican lawmakers and demand they support stimulus for working families.

Ten million jobs have been lost since the beginning of the pandemic. As the U.S. breaks records every day of confirmed COVID-19 deaths, cities like Philadelphia and San Francisco are closing restaurants and bars again, meaning many service jobs are back on the chopping block. Hundreds of thousands of small businesses have been forced to close, wiping out hundreds of thousands of jobs. But don’t worry, your beloved family-owned coffee shop will be replaced with another Starbucks!

For a five month period, those of us who lost our jobs because of COVID-19 closures received our state unemployment plus an additional $600 a week. That money is long gone, and in states like Arizona, the maximum monthly unemployment benefit is $960 – average rent is $1,495. In August, after the additional unemployment lapsed, jobless workers spent two-thirds of the savings they’d accumulated. By September, 4.6 million more people were living in poverty than before the pandemic.

And even the meager state unemployment that millions have been surviving on is about to disappear. The CARES Act, the last stimulus bill that was passed by Congress in March, extended eligibility for unemployment to include gig workers, the self-employed and freelancers who are normally ineligible for state unemployment. This ends December 31, and an estimated 12 million Americans will be cut off from their benefits on the eve of 2021. As of now, the bi-partisan stimulus bill does not extend these benefits.

Millions will wake up January 1 with no benefits and no job prospects, and rent will be due. An estimated 5.8 million people said it was somewhat to very likely they would face eviction by the end of the year. 17.8 million are behind on their rent or mortgage payments.

As part of the original CARES Act, a federal eviction moratorium was passed alongside state and citywide provisions to protect renters who were out of work. In August, the Center for Disease Control extended the moratorium until the end of the year, when the media warned of an estimated 30-40 million people at risk of eviction.

The federal moratoriums didn’t prevent late fees, or alleviate accumulating back rent, and some landlords and judges evicted tenants anyways. Three out of ten rental assistance programs passed or expanded under the pandemic have closed.

It is possible that we will see an extension of the eviction moratorium with the new stimulus bill, but even that is not enough. We need a cancellation of rent for the duration of the crisis and a forgiveness of the between $34 and $70 billion in accumulated rental debt!

If the end of the federal eviction moratorium doesn’t sound like enough of a nightmare, consider the other ways ordinary people are sinking under a mountain of debt. In March, the U.S. Department of Education offered student loan borrowers a break from their monthly payments, which was then extended in August until the end of the year. Eighty nine percent of all borrowers, or 37 million Americans with federal student loans took them up on that offer. This deferment will likely continue with the new bill, but it won’t be long before 42 million Americans will be back on the hook for an average $400 a month student loan payment. We desperately need a cancellation of student debt, something Biden is within his right to execute on day one in the White House!

Not too far behind student loan debt is medical debt, which reached an eye popping $45 billion in September. Four years ago, long before the pandemic and ensuing economic crisis, one in four Americans had trouble paying a recent medical bill. Now, the insured and growing numbers of uninsured alike are being slapped with exorbitant costs if they get seriously sick with COVID-19. The average cost of care for a 50-year-old without insurance hospitalized for COVID-19 is $78,569; the median yearly income for a 50-year-old: $58,000.

Ten times out of ten, the Democrats would prefer to kick the can down the road, and then point the finger at Republicans rather than put up a fight for working people. This compromising approach is criminal in the face of unprecedented overlapping crises for tens of millions of Americans facing financial ruin, homelessness, mental crisis, and disease.

It is time to stop letting corporate politicians play politics with our lives. They’re letting us starve and laying down the red carpet for their billionaires buds who have made over $1 trillion during this pandemic. Bernie Sanders, the Squad and the labor movement need to take a stand and start mobilizing workers and youth. We will need to get organized independently, not wait for another corporate politician to enter the White House, to fight for real relief from this disaster.