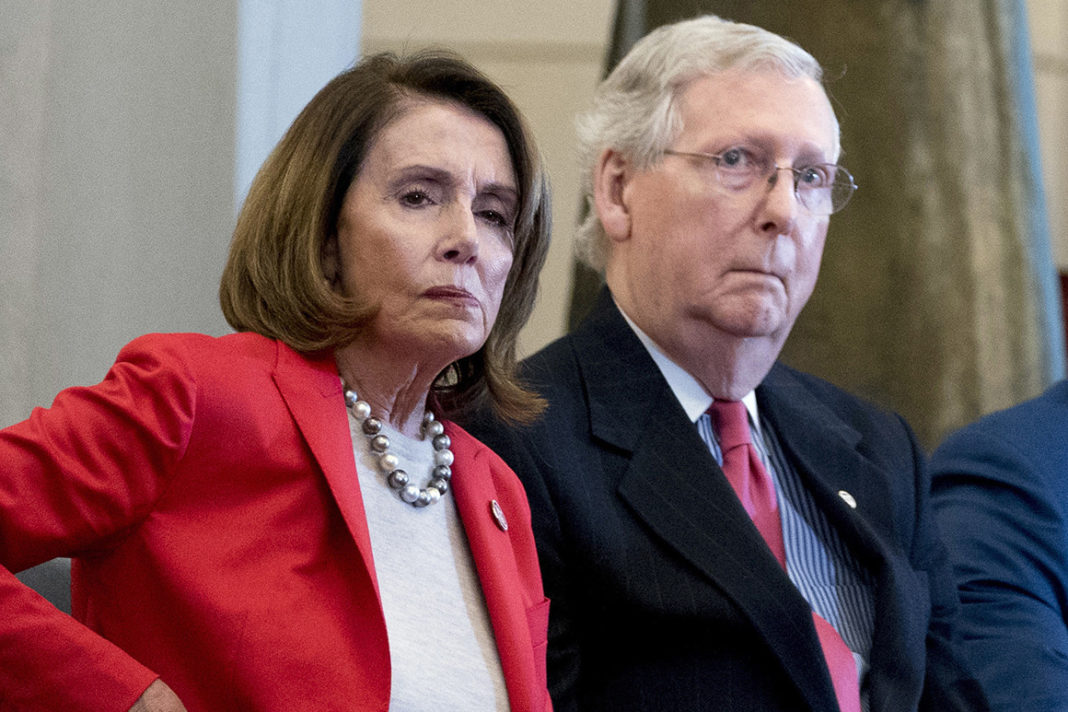 Congress has until this Friday, December 18, to pass an additional round of stimulus before going home for the holidays. This rapidly approaching deadline has Democrats dropping their “red line” demands faster than we can say “cowards!”

The context for their cowardice is totally shocking. Describing the macro-crisis facing the economy, Bloomberg writes: “Much of the economy remains in suspended animation—a zombie recovery—that masks how much the crisis has curtailed ambitions and how much depends on a new injection of government aid that has languished for months in a partisan Congress.” Of course, the crisis they describe is uneven. Billionaires are sailing into the holidays richer than ever while millions are threatened with job loss, eviction, and compounding debt.

In ongoing stimulus talks, Mitch McConnell reflects the most bare faced ambitions of the ruling class. He fiercely opposes stimulus for working people and supports sweeping corporate liability shields. To his credit, he has at least been consistent in advocating these priorities.

The Democrats on the other hand, were only stubborn in their negotiations when a compromise threatened to benefit Trump politically. They even walked away from a $1.8 trillion deal introduced by the White House in October solely because it could have given Trump a campaign bump. Bernie Sanders has correctly criticized them for this.

Not surprisingly, the second the presidential elections wrapped, all that stubbornness disappeared and the Democrats have given up everything but the kitchen sink.

“That is not a negotiation. That is a collapse.”

The Democrats in the House passed a pretty beefy stimulus package back in May called the HEROES Act. With McConnel’s iron grip on the Senate, this bill was always largely symbolic and laid out a wish list for the House Democratic Caucus. Notably, even this – their most “pie in the sky” proposal – left out key demands from House progressives like a paycheck guarantee to avoid pushing workers onto unemployment and free healthcare for the duration of the pandemic.

The HEROES Act feels like a fever dream compared to what the Democrats are now accepting. Their $3 trillion May proposal included: another round of $1,200 checks plus an additional $1,200 for dependents (up to three), $600/week unemployment top up, a continuation of expanded unemployment benefits for the “self employed” through March, a 12-month extension of the eviction moratorium, $300 billion for housing programs and rental assistance, and $875 billion in aid to state and local governments.

Now, in December, the Democrats are negotiating a package that may (as of today) include another round of stimulus checks alongside a 50% reduction in the unemployment top up (with no retroactive payments to make up for the months where the top up was elapsed), a one month extension of the eviction moratorium, and $0 in aid to states and localities.

As Bernie Sanders said, “That is not a negotiation. That is a collapse.”

If Congress doesn’t pass a 2021 spending bill by Friday, alongside the stimulus bill described above, the government will shut down. This will keep Congress in session through the holidays negotiating an end to the shutdown.

This is exactly what Bernie Sanders is threatening. He says he will hold up any spending bill and keep Congress in session through Christmas if they do not include another round of stimulus checks. It seems that this threat may have already forced some movement on the issue with stimulus checks being added back into the overall proposal. However, this comes at the expense of any aid to the states. Bernie should keep up the pressure and demand that additional stimulus money comes from the pockets of the super rich and not at the expense of cash strapped states.

Liberal pundits like Jake Tapper accuse Bernie of allowing the perfect to be the enemy of the good by blocking the passage of any aid. But this is the exact logic that has given the Democrats a free pass to shave off every layer of protection afforded to working people in their original HEROES Act. The deal they’re now accepting is even less than the Republicans’ original “skinny” stimulus proposal introduced in July!

If Bernie’s maneuver does wind up succeeding, and Congress is forced to accept his demand for another round of checks, this would prove one extremely important lesson to the American people: Nancy Pelosi’s game of concession olympics will never produce gains for ordinary people. We will only win by forcing the establishment’s hand and being willing to disrupt business as usual.

This lesson should be applied far beyond the question of $1,200 checks. The relief we need also includes: $600/week unemployment top up, rent cancellation, cancellation of student debt, an immediate transition to a Medicare for All system, and more. Progressives in Congress like AOC need to use every tool at their disposal to win these things, including holding up Pelosi’s initiatives in the House until she meets their demands, and building pressure in the streets through protest and direct action.