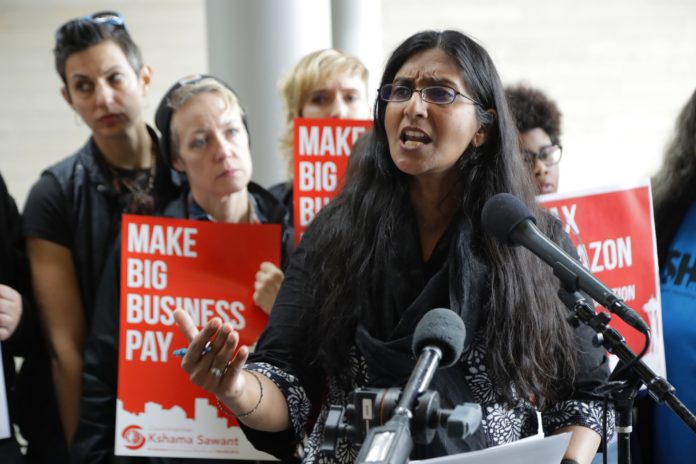 Big business, corporate Democrats, and the right wing are once again going after Seattle’s socialist councilmember, Kshama Sawant, this time with a right-wing recall campaign. After Amazon and big business failed to defeat her with record-breaking corporate spending in last year’s election, the political establishment is now pushing for a re-do in a lower-turnout special election that would have a wealthier, whiter, and more conservative electorate.

Kshama is being targeted because she has stood unapologetically with working people and our movements during her seven years in office. The establishment is particularly angry about her support for the Black Lives Matter movement and for leading the way on taxing big business this year. During the height of this summer’s protests, she championed a first-in-the-nation ban on police use of chemical weapons and a major tax on Amazon and big business to fund affordable housing and a Green New Deal. The Amazon Tax will amount to a $2 billion transfer of wealth from big corporations to ordinary people over the next decade. This adds to a long list of precedent-setting victories she’s led on, including winning a $15 minimum wage in the first major U.S. city, landmark renters’ rights victories like the winter evictions ban and the move-in-fees cap, Indigenous Peoples’ Day, and more. But what the establishment fears most of all is the example of a socialist like Kshama in office showing what can be won when working people get organized and fight.

That’s why the political establishment is going all out with this right-wing recall effort, in which they are characterizing the Black Lives Matter protests as violent and lawless – an obvious racist attack on the movement. Two of the four recall charges attempt to criminalize Kshama’s support of the movement: one charge for participating in a march on the mayor’s house led by the families of victims of police brutality, and a second charge for allowing protesters inside City Hall for a mask-on, one-hour rally. In its public campaigning, the recall effort has led with the claim that Kshama has encouraged “lawlessness” with her support for Black Lives Matter.

The right wing is attempting to spin their recall campaign as a grassroots initiative, but the reality of their donors betrays them. While they’ve touted the small donations they’ve received, they leave out the reason why. They’ve asked supporters to donate $25 or less so that most of their donors – 77% in fact – can legally remain anonymous, which helps to obscure their corporate and right-wing funding. The Kshama Solidarity Campaign, which is fighting against the recall attempt, has less than 1% anonymous donations, by comparison. The public part of the recall donor list reads like a who’s who of Seattle’s business elite, including Trump-supporting billionaire Martin Selig and corporate executives like Airbnb CFO David Stephenson and Merrill Lynch Senior VP Matt Westphal. The recall campaign is absurdly trying to portray their supporters as a grassroots group of local “concerned citizens” while painting Kshama’s support as coming from out-of-town agitators – a typical right-wing attack. But the truth is that Kshama has more than twice as many donors from her district as the recall campaign – with already 670 District 3 donors compared to only 322 District 3 donors for the recall campaign. The most common occupations of our donors are educators, students, and tech workers in sharp contrast to the district’s super-rich backing the recall campaign.

We expect that billionaire and corporate support will continue to line up behind the recall, likely again with massive corporate PAC spending as we saw against Kshama last year. Selig, for example, dropped $25k to push through the repeal of the first Amazon Tax in 2018 and could do it again with a stroke of his pen. We’ll need a mighty working-class movement to fight back.

While the date of the recall election is not yet fixed, it is likely to be held in late spring or summer. The recall campaign will have six months to gather its 10,700 signatures after the Supreme Court ruling on January 7, and the election will be organized between 45 and 90 days after those signatures are certified. The Kshama Solidarity Campaign, which is fighting to defeat the recall attempt, has not been waiting until the date is determined – we have already talked to thousands of working people on the streets and at the doors in our District, though we moved to phone banking in the context of the current COVID-19 spike.

The right wing will not stop their attacks with just Kshama Sawant. If this right-wing recall campaign succeeds, it will embolden efforts by the establishment and big business around the country to go after other left elected representatives. This recall is part of a dangerous trend of attacks, nationally and internationally, against not only socialists but any representative who dares to stand with movements of working people, from Attica Scott to Jeremy Corbyn to Barbara Nowacka. Just as Kshama’s election win in 2013 was a precursor to a wave of wins for socialists across the country, a successful recall could act as a springboard for the establishment to go on the attack against the socialist movement nationally. The democratic party establishment is already looking to blame socialist ideas for their failure to secure a “blue wave” in the 2020 election. But even a cursory look at the election results shows that left ideas won out – just to take one example, every candidate who supported Medicare-for-all won their race, while “moderate” politicians underperformed.

That’s why the best defense is a good offense. Our campaign is linking the fight against the recall to a fight for positive demands, like COVID relief and a guaranteed jobs program paid for by taxing big business, an elected community oversight board with full powers over the police, and a socialist Green New Deal. But the only way we’ll win this fight is if working people get actively involved. Donate, sign up to volunteer, and follow the campaign on social media!