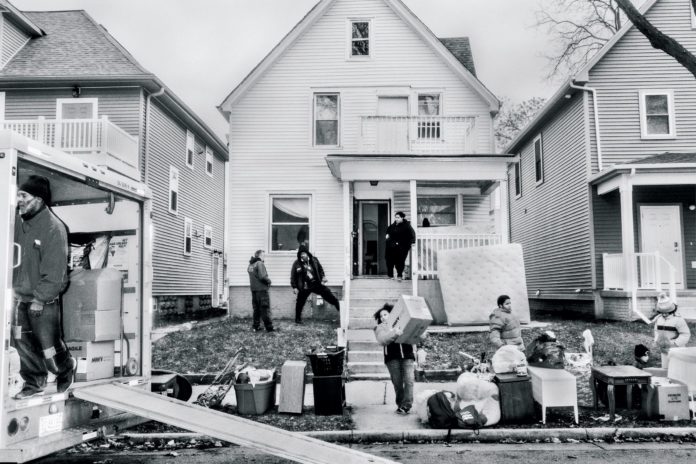 Racism is built into the foundations of our for-profit housing system. The coming economic depression will hit Black renters in particular as those who have struggled to pay rent during the pandemic fight to stay in their homes. Soon the millions activated by #JusticeforGeorgeFloyd will need to join the struggle against evictions and rental debt that threaten to devastate communities of color.

The mainstream media is sounding the alarm, warning of an “avalanche of evictions” in the summer and fall. Eviction moratoriums are expiring one by one, and the CARES Act ban on evictions in federally-subsidized housing ends July 25.

Rent Strike 2020 launched in April to build a collective fightback among renters. Three million have signed the petition to cancel rent. Thousands of tenants have joined local Facebook groups to share strategies, and have achieved a number of successes through organizing in their buildings. However, the biggest battles are ahead.

Landlords have used harassment, threats, “keys for cash,” and utility shut-offs to illegally evict despite bans. In New York, California, and Massachusetts, groups of landlords are suing for their “fundamental constitutional right” to evict. The U.S. was already facing an eviction epidemic, with two million filed every year, disproportionately targeting women and people of color. Black women are evicted at higher rates than any other demographic. Landlords are itching to resume business as usual by bearing down on non-payers, and must be stopped at all costs.

Racism has been at the center of U.S. housing policy, linked with the development of U.S. capitalism in the 20th century.

In the 1930s, the federal government created guidelines that were used by public and private interests to systematically deny loans and mortgages to people in poor, Black neighborhoods. The segregationist agendas of the New Deal’s Public Works Administration, and later the National Housing Authority, shuttered people of color into packed, underserved public housing and thus directly created “ghettos” whose residents were criminalized and overpoliced. Then, in the 1950s, the Interstate Highway System bulldozed urban areas – mostly in Black neighborhoods – and displaced entire communities (The Color of Law: A Forgotten History of How Our Government Segregated America, Rothstein, 2017).

On the back of the powerful Civil Rights movement, the 1968 Fair Housing Act formally banned discrimination in the housing market. Yet somehow, the homeownership gap between Black and white Americans is higher today than it was in the 1960’s. The state and the banks have continued to work hand-in-hand to hold down the Black working class.

The 2008-09 subprime crisis dealt a huge blow to people of color who were victims of predatory lending: Black and Latino homeowners were 70% more likely to lose their homes to foreclosure. Black homeownership hit a 50-year low in 2019, and 58% of Black households rent. At the same time, gentrification is pushing working people and people of color out of cities to make way for big business and the wealthy, creating a chronic shortage of affordable housing.

This has paved the way for the current crisis to severely impact Black workers. Over 1-in-6 Black workers are out of a job. A quarter of Black and Latino renters reported nonpayment or deferment of rent during the pandemic, and 44% of Black tenants said they had “little or no confidence” they would be able to meet their next rent payment.

Most people are paying rent with expanded unemployment, which hangs in the balance with the second stimulus package as the Senate sits on their hands. Meanwhile, non-payers are being pushed into payment plans and deferrals with no forgiveness, and the rental debt is piling up.

We should be clear that when sheriffs show up to force people out of their homes, this is an act of police violence. The threat of evictions is yet another way the cops terrorize communities of color to fuel the profits of greedy landlords and investors.

In major cities where the housing crisis has pushed thousands into the streets, police regularly “sweep” homeless encampments, evacuating residents and confiscating their belongings. Forty percent of homeless Americans are Black, as are more than half of homeless families with children. Our cramped and underfunded shelter system would be woefully unprepared for an influx in homelessness. We have no choice but to fight to keep people in their homes!

How We Fight Back

The #JusticeForGeorgeFloyd protests have shown the unshakeable power of a broad movement. From Minneapolis to Seattle, people are seeing the potential of mass struggle to win victories. We can use the momentum from this movement to continue to push toward defunding the police and redirecting that money toward quality, publicly-owned social housing, education, and healthcare. Every public dollar funneled into police budgets could be better spent funding our schools and public housing.

There are key lessons we must carry forward from these movements and successful tenant fightbacks from history. Direct action works. Solidarity is a strength: by publicizing and politicizing our circumstances, tenants can mobilize our neighbors to stop eviction in its tracks. Mass demonstrations can win stunning victories if we persist: when people of all backgrounds flood the streets, we can demand no evictions or foreclosures, cancellation of rental debt, and evictions to be struck from tenants’ records. We must also call for rent control to stop gentrification, and fund affordable social housing by taxing the rich and big corporations and defunding the cops.

Under capitalism, a unit of housing is just another poker chip for landlords and investors to pile up wealth at the expense of working people. We can take matters into our own hands if we organize! It will take a powerful, revolutionary movement to reverse the long history of racism in housing and build a new system where quality, permanent housing is a human right.