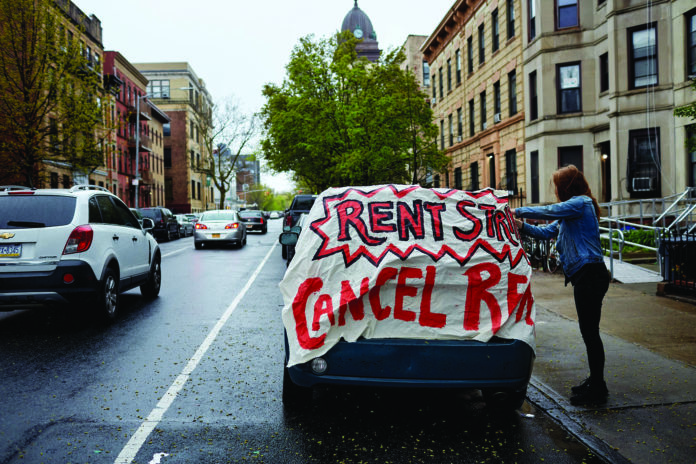 Mandy had recently moved into a new building in Chicago but hadn’t yet met many of her neighbors. She opened her door one afternoon to find a note on top of some moving boxes she’d left outside the door. The note asked how she would feel about trying to organize the tenants in their building together and ended with an invitation to text the phone number scribbled at the bottom. That first note led to Mandy and her downstairs neighbor Daniel pulling together an ad hoc tenants committee with their building neighbors and beginning to reach out to renters in other buildings owned by the same highly-profitable corporate developer.

Mandy and her neighbors aren’t alone in these initial efforts to reach out to neighbors to fight together for rent reductions and defend against potential evictions. Nearly three million people have now signed onto the Rent Strike 2020 petition demanding a suspension of rents, mortgages, and utility bills during the duration of this crisis. While not all three million signees are actively organizing, there are nevertheless countless stories of renters across the country who have taken this crucial next step to fight for rent relief.

In Minneapolis, renters with Mint Properties have begun a 78-building-wide organizing effort for rent forgiveness that started with just one renter. Tuli took the first step by posting a letter on all their neighbors’ doors. They soon got responses from half the building. One Mint Properties renter who is also immunocompromised stated that she would likely move out anyways because she had lost her job and could no longer afford rent. There are millions of other renters facing similar circumstances – compelled to choose between moving out now or facing eviction in the future.

The situation will become even more difficult for renters when the additional $600/week in unemployment benefits provided by the CARE Act expire at the end of July, especially if there isn’t an extension of these benefits or further rounds of stimulus checks. Eviction moratoriums will also soon begin to be lifted across the country, with Texas’s eviction moratorium already ending on May 18. Some states never imposed eviction moratoriums in the first place. We shouldn’t doubt for a minute that many corporate landlords will rush to file evictions once these moratoriums are lifted. Even with the best legal defense, renters will face an uphill battle in courts.

While the risks of evictions and landlord retaliation are very real, we clearly can’t count on a legal process that is already stacked against us by years of corporate landlord associations spending billions to advocate for landlord-friendly laws. The best way to defend ourselves and our neighbors who are at risk of eviction is to begin organizing together to collectively defend against evictions like renters in Tuli and Mandy’s buildings have begun doing. Eventually we will likely need to utilize direct action tactics to delay and stop eviction proceedings and build pressure on local politicians by highly publicizing these cases. Our ability to fight back in the coming months will depend on how organized we are in our buildings and cities and across the country.

In one small building in Boston, one tenant, Eva, reached out to her neighbors through personal handwritten notes and doorknocking while wearing a mask and maintaining social distancing. Connecting with her neighbors led to the seven-unit building forming a tenant committee which has already been able to win up to 50% rent reductions for all tenants during the crisis.

While we should be organizing in our buildings, it’s also clear we will need more than just a building-by-building strategy to fight back. In Eva’s own words, “Millions across the country are struggling to make rent. Though organizing in my building is a start, and has materially benefited tenants, we need a movement of renters taking up the serious work of getting organized.” Our own building organizing needs to be channeled into fighting for broader political demands, including a rent, mortgage, and utility bill suspension during this crisis. Reports from the National Multifamily Housing Council noted that up to 20% of renters were unable to pay a cent in rent during the first week of May. Without relief, millions more will have to ask themselves whether or not to prioritize rent or other basic necessities in the coming months.

Renters Can Fight Back

Of course the challenges that renters are facing under this crisis aren’t a new phenomenon. Today’s economic difficulties come on top of soaring rent increases in recent years. About 1-in-4 renters now pay over 50% of their income toward rent, leaving little room for saving for unexpected emergencies like a global pandemic and mass unemployment. As rents rise, private equity firms and large real estate developers meanwhile have profited off the increasing number of working-class people who can’t afford to buy a home. In the wake of the 2008 foreclosure crisis, the housing market has become even more saturated by corporate investors hoping to turn a quick buck by buying up investment properties. From 2011 to 2017, private-equity groups and large investors spent $36 billion swooping up over 200,000 single-family homes, many of which were foreclosed properties previously owned by working families.

Our first and most immediate step to build renters’ power is for us to organize in our own buildings right now to fight for rent reductions – but we will need to take this fight further than temporary rent suspensions. These first organizing steps during the crisis can begin to lay a foundation for the kind of organized collective political action needed to fight back against the corporate landlord lobby and for a broader transformation of the for-profit housing market. Under capitalism, billionaires, and even soon-to-be-trillionaire Amazon CEO Jeff Bezos, are making billions in profit while working people are struggling to keep a roof over their head.

There is an urgent need for universal rent control on a national scale and a tax on the wealthiest corporations like Amazon to build high quality, publicly owned social housing. Ultimately we will also need to bring the top profit-making corporate landlords into public ownership to guarantee housing as a human right. As more essential workers also organize to fight for basic safety protections and hazard pay during the Coronavirus crisis, we need to link our struggles as renters to the broader struggles of the working class. Our efforts organizing in our buildings and our workplaces today are an essential starting point now to fight back against a capitalist system that refuses to meet our basic needs, even during a worldwide public health crisis.