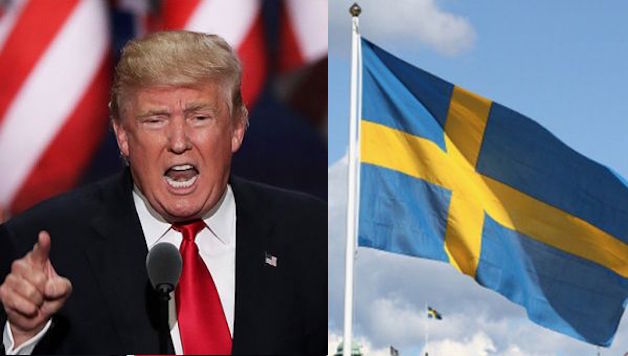 What is behind Trump’s attack?

“You see what happened last night in Sweden.? Sweden!…Who could believe it? Sweden.” Those comments in typical Trump style, made in a speech in Melbourne, Florida, Friday 10 February, have caused a worldwide debate. It was not a mistake, but a conscious mentioning of Sweden by Donald Trump. In the following sentence, he said: “Sweden! They took in large numbers”. The purpose was to support his wall and travel ban, pointing at refugees and muslims as criminal.

What actually had happened “last night” was Trump watching ”Tucker Carlson Tonight” on Fox News. The Islamophobic filmmaker, Ami Horowitz, portrayed a country torn apart by criminality caused by refugees. The Swedish policemen interviewed, however, said all the questions were about crime – migration was not mentioned but was added during the editing.

This is from an interview they gave to Dagens Nyheter: ”It was supposed to be about crime in high risk areas. Areas with high crime rates. There wasn’t any focus on migration or immigration.” “We don’t stand behind it. It shocked us. He has edited the answers. We were answering completely different questions in the interview”. “It feels like hell. The real questions should be shown along with our answers”.

In Sweden, none of the arguments of Trump are new. The extreme-right, racists and fascists have for a long time argued that immigrants are criminals. The number of refugees arriving is of no importance for them, it is always “too many”. The leaders of the racist party, the Sweden Democrats, are now writing in the Wall Street Journal, supporting Trump, saying Sweden has become more insecure because of “irresponsible migration policies”.

Trump’s “Sweden!” came when he was – again – referring to the brutal terrorist attacks in Nice, Brussels and elsewhere. The reason he added Sweden is that it’s well known that more refugees have arrived in Sweden than for example France or Belgium. The Swedish racists, trying to back him up, write that “our first suicide attack on Swedish ground” took place in December 2010. The incident was, in fact, an Iraqi-born man – a Swedish citizen – who killed himself in a failed bombing attempt in central Stockholm. That kind of attempt, more than six years ago, has not been repeated since. In the Autumn of 2015, an extremely high profile police hunt for a “refugee terrorist” ended with the the state security forces admitting it was a mistake.

However, there have been several terrorist attacks since then – by racists and fascists. In October 2015, Anton Lundin Pettersson killed three people in a school in Trollhättan with a sword and a knife. He was a fan of Hitler and his stated aim was to “kill as many foreigners as possible”.

Over the last two years, more than 50 attacks – mainly arson – have targeted refugee hostels. In Gothenburg, three fascists have recently been arrested for bomb attacks, including against a trade union centre. In 2015, there was also an arson attack against the apartments of members of Rättvisepartiet Socialisterna (CWI Sweden).

These racist attacks, however, are not labelled as “terrorism”, not by mainstream media or racist politicians like Trump.

With Donald Trump primitive right-wing populism and racism are personified in the presidency of the world’s leading state. The background of Trump’s “Brain” – Steve Bannon – in Breitbart is well-known. In the debates over Sweden, many Trump supporters have referred to the Gatestone Institute, a notorious islamophobic lobby group. One of them is “Fjordman”, the ideological guru of the Norwegian fascist terrorist, Anders Behring Breivik.

Trump is a president who seems to act unpredictably, but with far right advisors and a conscious reactionary plan. Nationalism – America First – is an important part of the programme. The costs in terms of deteriorating relations and reduced trade are supposed to be offset by the feeling that Trump is fixing something that has gone wrong. In addition, this encourages politicians in other countries to pursue a similar line.

Only a few days after Trump’s Sweden speech, world media reported riots and stone-throwing against police in the Stockholm suburb of Rinkeby, with a large immigrant population. Trump of course jumped on it: “Give the public a break – The FAKE NEWS media is trying to say that large scale immigration in Sweden is working out just beautifully. NOT!”

“The thing is, it doesn’t prove Trump right unless you argue on the premise that these 30 young men—in one isolated area with a population of 12,000 – are rioting based on the colour of their skin, and that alone. He assume they all have citizenship, because most of the youth in that area are born in Sweden to immigrant parents. What makes them ‘immigrant’ rioters and not Swedish? Does anybody really want a debate about whether or not violence is more inherent in immigrants? Is it passed on through DNA?”

The fact is that criminality is not increasing in Sweden and there is no connection between the increased number of refugees in 2015 and crime. Also, foreign born people feel more insecure than those born in Sweden.

Even Sweden’s former conservative prime and foreign minister, Carl Bildt, exclaimed, “What’s he smoking!”. He commented that Orange County, Florida, where Trump held his speech, has 50 percent more murders than Sweden as a whole. It has just 1.25 million inhabitants compared to Sweden’s 10 million.

Extreme right politicians, such as Nigel Farage, have pointed to Sweden as a “rape country”, also connecting that to refugees. But the increased number of rapes being reported in Sweden is a result of the struggle against the violence of men against women, resulting in both increased consciousness and changes in the law so that more cases correctly are viewed as rape.

In the Sweden debate, Trump also consciously promotes his campaign against false and faked news and media. So clearly attacking one of the most important pillars in capitalist society may seem counter-productive. But for Trump it is a way to maintain the support of his voters, who for a long time have been suspicious of the media. Trump has become a spokesperson for internet trolls, while he hopes to sooner or later force established media to dance to his tune.

It is true that Sweden has changed. It is not Sweden’s social reforms or refugees that are behind social problems and insecurity. 30 years of neo-liberalism is taking its toll.

In 1980, Sweden was the most equal country in the world. In November last year, however, the new list of Swedish billionaires was presented. (One billion Swedish krona is 100 million euros or dollars). 178 people own 2,000 billion krona, which is equivalent to double the state budget and half the GDP! The two wealthiest individuals own more than the poorest half of the population – 5 million people. In fact, Sweden has more dollar billionaires per capita than the US!

Schools, health and elderly care, public transport and more have been privatised to a very large extent. Bank profits are sky-high while our party and others are involved in struggles against school and hospital closures. Sweden has the lowest number of hospital beds per capita in the OECD.

Sweden at the moment has high economic growth, with unemployment going down. In fact, the arrival of refugees has increased growth and provided new jobs.

Also, in the Autumn of 2015, the Swedish government went from saying “refugees welcome” to being among the first to erect a de facto wall. Those fleeing from wars in Syria or Afghanistan were blocked from entering the country, family reunification was basically abolished and a programme of mass deportations was launched.

The anti-refugee policy, however, has of course not increased resources in any other important field, such as health care. The main effect has been a turn to the right by the Green-Social Democratic government and the traditional opposition parties. To act brutally against the refugees has encouraged racists and fascists and given them confidence.

Remove Trump for His Real Crimes

The Revolutionary Ideas of Rosa Luxemburg

ABOUT US
Socialist Alternative is a national organization fighting in our workplaces, communities, and campuses against the exploitation and injustices people face every day. We are community activists fighting against budget cuts in public services; we are activists campaigning for a $15 an hour minimum wage and fighting, democratic unions; we are people of all colors speaking out against racism and attacks on immigrants, students organizing against tuition hikes and war, women and men fighting sexism and homophobia.
Contact us: info@socialistalternative.org
FOLLOW US
© Socialist Alternative 2019 | All rights reserved
26 Shares
Tweet
Share26