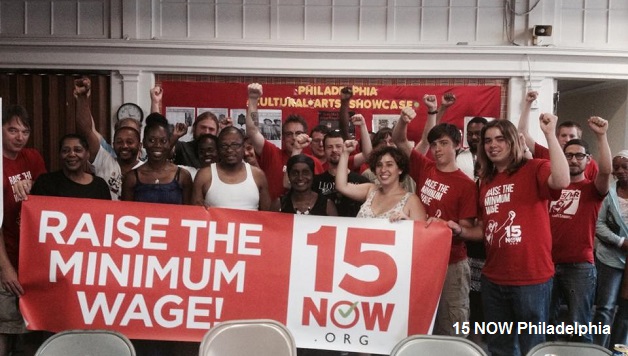 Could Oregon Be the First State to Win 15?

The movement for a $15 minimum wage in Oregon has gained massive momentum during 2015, with 16 legislative sponsors, hoards of media attention, and a rally drawing hundreds from all over the state. By the time the legislative session began in February, Oregon had become the first state in the country to seriously consider a statewide $15 minimum wage.

With over 100 labor unions, community groups, faith organizations, and small businesses endorsing $15 for Oregon, and with poll numbers showing majority support, it seems the movement to make Oregon the fist state to win $15 is an unstoppable force. When legislative committee hearings were held on raising Oregon’s minimum wage, hundreds of people from around the state again flooded the Capitol, filling the hearing room and three overflow rooms. They kept the committees in session for four hours of testimony in favor of $15 from low-wage workers, small business owners, and other allies.

Despite overwhelming support, news out of the capitol is that a minimum wage bill won’t pass. Using the typical tactic of hiding corporate interests behind the facade of concern for small business, some legislative leaders reason that, because they are trying to pass paid sick days, small businesses can’t handle a minimum wage raise, too.

As a result of what seems to be a clear unwillingness to listen to the will of working Oregonians, on April 17 a coalition of 15 Now, PCUN (Oregon’s farmworkers’ union), and Rural Organizing Project filed a ballot initiative for a statewide $15 minimum wage. If the state legislature fails to act, we’ll take $15 to a vote of the people and make Oregon the first state to win $15!

The numbers are in: a recent survey commissioned by AFSCME  (the union representing city workers) showed that 87% of Philadelphia voters support increasing the minimum wage to $15 an hour (“Crafting an Economic Agenda for Philadelphia’s Next Mayor,” 04/21/2015). This shows concretely what we have been arguing to city and state elected officials: there is overwhelming support for significantly higher wages. 1 in 3 people in Philly lives in poverty, and we are the poorest large city in the U.S. There is nationwide momentum for winning campaigns to increase the minimum wage. Similar major cities like Chicago, Seattle, Los Angeles, and San Francisco, have already implemented or are exploring large wage hikes. New York Governor Cuomo is exploring legal options that allow him to use special powers to raise wages for fast-food workers in NewYork State.

In Philadelphia, like in many cities across the country, local efforts to raise the minimum wage are blocked by a statewide preemption. 15 Now Philadelphia has taken the position that these laws are immoral and unjust. Our city is in crisis and, in times of crisis, our elected officials have the duty to use their political authority to enact emergency legislation to ensure the health and safety of their constituents. Slavery and segregation were firmly encoded in the law before advocates organized to demand bold action. Historically, courts have responded to social movements. Recently, the gay rights movement has pushed courts to reverse dozens of decisions denying same-sex couples to marry.

15 Now Philadelphia is working with allies, including SEIU 32BJ, Fight for $15, and POWER, to keep the minimum wage issue on the political agenda.  On May 14, City Councilman Johnson introduced legislation into City Council to put a question on the November ballot calling for a $15 an hour minimum wage. At the state level, Senator Daylin Leach introduced a bill that would abolish the tipped minimum wage, raise the statewide minimum wage to $15 an hour, and and link it to inflation. On the ground, we continue our campus and neighborhood campaigns to deepen grassroots support. We are calling on the major public employers of the city to pay a $15 an hour minimum, and we are ready to take the fight to the streets, classrooms, and workplaces of Philadephia.

It was a strange victory. After a raucus three-hour meeting, an angry silence filled the room as the Metropolitan Airport Commission voted to set wages for 3,000 low-wage workers at Minneapolis-St. Paul Airport to at least $1 above the state minimum. Just one year before, a 10% raise for minimum wage workers would have been greeted as a big victory. But since 15 Now launched the minimum wage fight at MSP ten months ago, and especially since SEIU made the call for $15 the main slogan of their AirServ organizing drive last November, workers’ expectations have risen. Commissioners defending the small raise were booed.

“A $1 raise is not enough. We need a union. We need $15,” said Abdi Ali, a leader in the AirServ union drive and in 15 Now Minnesota. Meeting afterwards, workers and supporters agreed to continue the fight for $15 at MSP.