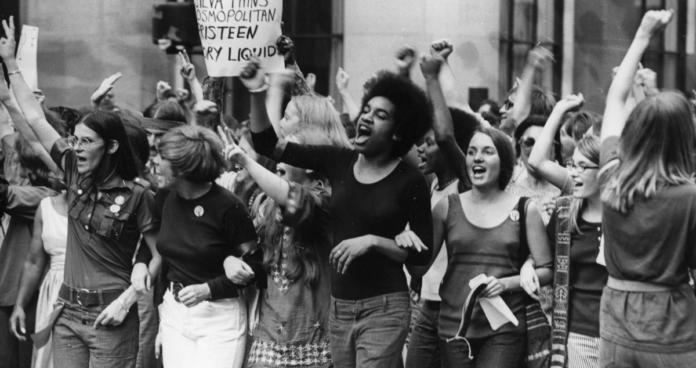 Half a century after the Supreme Court decision on Roe v. Wade, abortion in the U.S. is effectively banned in thirteen states. The bitter repeal of Roe by the Dobbs decision in 2022 enabled the right wing to notch a significant win under its belt by effectively setting the reproductive rights movement back by literal decades. This January 22, socialists and working people can commemorate the 50th anniversary of Roe by charting a concrete path to how we can win back and expand abortion rights for all.

Like all achievements for the working class under capitalism, the right to an abortion in the U.S. was not granted through the generosity of the rich and powerful. Rather, nothing short of a titanic women’s liberation movement was needed to force the hand of the political establishment under threat of explosive backlash.

The feminist movement of the 1960s and 70s was framed by a whole cascade of social upheavals both nationally and internationally. In the United States, this took the form of historic mobilizations like the anti-Vietnam War movement and the militant struggles of black activists in the Civil Rights movement. Clashes against the capitalist class across the world opened a vein of radical ideas and strategies for working and oppressed people everywhere, including feminists in the U.S. The upsurge in the women’s movement was reflected in the rapid growth of mainstream organizations such as National Organization for Women (NOW) and radical groups inspired by black, anti-colonial, and socialist movements.

A battery of militant action grew from this chasmic well of societal struggle. Strikes, marches, speakouts, and occupations became the bread and butter of the women’s liberation movement and the fight for national abortion rights. The National Women’s Strike for Equality on August 26, 1970 saw 100,000 women gather across the country to demand free abortion, equal opportunity in employment and education, and free childcare in what was the largest women’s liberation protest in U.S. history.

Activists and working women finally won a major victory in 1973 when, after legal strategizing by NOW and other reproductive rights groups, the Supreme Court issued its decision on Roe v. Wade. While significant, Roe was not a comprehensive success by any means. The decision protected a pregnant person’s right to terminate only in the first trimester, and did nothing to address the issue of abortion access, which has remained out of reach for many for as long as the practice has existed. The popular demand for free childcare was never realized either, as movement leaders failed to take the movement to the next step to fight Nixon’s veto of the Comprehensive Child Development Act. Although abortion was technically legal for 50 years, it was never really a right.

Victories won by movements under capitalism will always be rolled back if they aren’t pushed forward, and Roe was no exception. There remained a need to escalate the struggle to win free, safe, and legal abortion access for all, as well as other critical demands raised by the radical wing of the movement, like universal childcare.

Instead, since 1973, the pro-life right-wing has organized and steadily chipped away at abortion access until they extinguished it outright. In the meantime, the conspicuous absence of a strong people-powered movement organizing to defend reproductive rights left leadership in the hands of NGOs and the impotent Democratic Party machine. Under these circumstances, the devastating defeat of the Dobbs decision was never just a possibility, but an inevitability.

It’s Not Over Til It’s Over

The repeal of Roe is a heavy blow to millions of poor and working women who face a patchwork landscape of legality on top of already prohibitive costs. Yet, a basis for restoring the protections that Roe provided—and waging a battle that goes beyond its limited framework—is absolutely present in society.

A September 2022 poll showed that a significant majority of Americans see Roe’s death as a serious loss of rights for women. Even in a variety of Republican-dominated states, most people want some or most abortion rights to remain legal, and the results of state referenda post-Dobbs reflect this broad support. In August 2022, for example, Kansans showed up at the polls in record numbers to defeat a ballot measure that would have struck down abortion as a statewide constitutional right. Three months later, people in California, Kentucky, Michigan, Montana, and Vermont voted on midterm ballot initiatives to protect abortion in a sharp rebuke to the Supreme Court’s undemocratic ruling. These outcomes, like the historic 2018 referendum in Ireland, express the vast gulf in interests that exists between capitalist state institutions and the masses.

Over the summer, working people led by the City Council office of Socialist Alternative member Kshama Sawant succeeded in making Seattle the first abortion sanctuary city in the country since Roe’s demise. Feminists in Madison, Wisconsin — also led by Socialist Alternative — followed suit by mobilizing a grassroots campaign of walk-outs, protests, rallies, and sit-ins to pressure Dane County to protect those seeking abortions.

Ordinary people’s fear of further right-wing attacks on bodily autonomy delivered the Democrats a victory in the November midterms. That said, buoyed by voters driven to the polls to protect abortion rights, it still took Biden less than a week after the midterms to walk back his commitment to codify Roe. “I don’t think [Americans] can expect much of anything,” he said at a November 2022 press conference, “I don’t think we’re going to make it.”

50 years ago, the U.S. feminist movement overcame seemingly insurmountable obstacles to win the decision on Roe v. Wade. Years of grassroots organizing involving millions of working class and oppressed people were needed to tip the scales against a conservative Supreme Court, Nixon administration, and societal misogyny. Workers and youth from all corners of the country held discussions which gave way to strategizing, coordinated action, and escalation with clear demands. Those who sought a future for women’s liberation joined up to fight the fundamentally rotten political establishment — and won.

Today, that establishment is not just pretending to work for ordinary people, but is actively undergoing an emboldened right-wing resurgence. To fight intensifying attacks on women and reclaim and expand the protections afforded by Roe, we need new women’s organizations independent of the corporate two-party system that will unequivocally go to war against all forms of oppression. These organizations will need to put forward bold demands on reproductive rights that go beyond those of the 1960s and 70s, and beyond the spineless apologies of the Democrats.