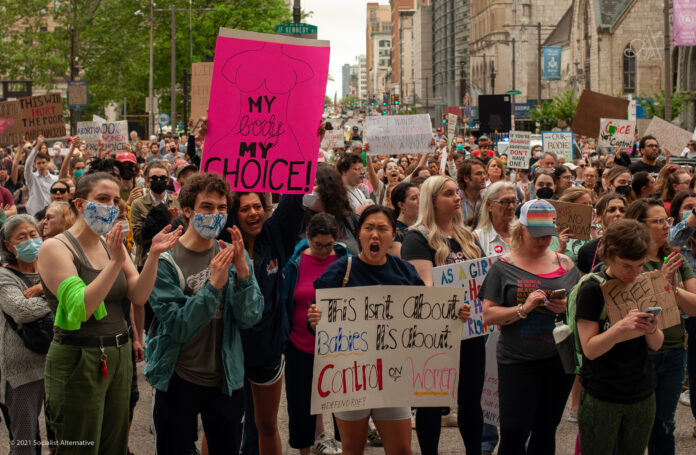 The majority of Americans do not want to overturn Roe. In fact, according to aggregate data from four national surveys, somewhere between 85-90% of Americans think abortion should be legal in at least some circumstances. How then is it possible that we are standing at the edge of this cliff? How is it that in a matter of weeks, 58% of women of reproductive age will live in a state where they very likely can’t get an abortion?

The simple answer is that the right wing is prepared to mobilize their vocal minority to fight, while the Democratic Party and liberal NGOs tell their angry majority to stay home.

In the wake of the leaked Alito draft in early May, it was not the major women’s rights organizations that urgently called people onto the streets. In many places, it was Socialist Alternative. In cities where Planned Parenthood and Women’s March were forced to act, they did so by organizing what felt more like a funeral than a rally. They mourned the not-yet-dead Roe v Wade and asked us to donate and vote in November.

If it’s not yet obvious how treacherous an approach this is, consider that the country’s top pro-life strategists were not celebrating in the wake of the leak. In fact, they were trembling in fear that public anger would force the Supreme Court to reverse course.

Brian Westbrook, Executive Director of Coalition Life, told the New York Times: “No, I don’t see that the leak, at all, seals the deal. Not even in the slightest bit. Because we know that human beings, we change our minds. Human beings, we have a sense of being influenced.”

The pro-life movement’s top guns were not convinced they’d won the fight. Liberal politicians and NGO leaders, however, were convinced they’d already lost. They left the field before the game even started.

Why Won’t They Fight?

The day after the Politico leak of the draft Supreme Court decision came down, NARAL Pro-Choice, a leading abortion rights organization, saw a 1,400% surge in donations. Half of the donations came from first-time donors. ActBlue, a Democratic fundraising platform, raised $12 million in one day.

With their millions in the bank, what is NARAL telling their supporters to do? Get out the vote for Democrats. With their authority as the primary abortion rights organization in the country, what action is Planned Parenthood suggesting we take? Sign an online petition, tell our stories, and donate.

The day after the leak, tens of thousands of people came out into the streets in cities across the country looking for a way to fight back. Socialist Alternative members reported that our tables at the protests were flooded with teenagers and young adults looking for next steps for the struggle. While we were able to channel the rage of hundreds into school and workplace walkouts, sit-ins, and action assemblies, there were hundreds of thousands that would’ve taken action if the major women’s organizations took the lead.

So, why didn’t they?

While their stated mission to defend reproductive rights resonates with millions, their strategy to actually get it done is fundamentally flawed.

Roe v Wade was won because the titanic women’s movement of the 1960s-70s was led by mass organizations of struggle that fought ferociously in the streets through marches, strikes, and direct action like the historic Jane Collective who provided safe but illegal abortions. Rather than replicating these successful methods of struggle, Planned Parenthood and NARAL have built themselves as multi-million dollar lobbying machines. Change, as they see it, is won at the ballot box and not on the streets.

In the “What We Do” section of their website, NARAL proudly admits that three of their four top strategies boil down to lobbying and electing politicians. Planned Parenthood spent a record $45 million during the 2020 elections. This included a donation to, and rousing endorsement for, Joe Biden. (The standards for their support are depressingly low, as it wasn’t until 2019 that Joe Biden dropped his support for the Hyde Amendment which bars federal funding to any organization that provides abortions… including Planned Parenthood.)

These organizations, far from being led by activists, are led by a who’s who of Democratic Party operatives. NARAL’s new president Mini Timmaraju was a former advisor to Biden and senior advisor for Hillary Clinton’s 2016 presidential campaign (alongside Planned Parenthood Vice Board Chair Karen Finney).

If you follow their logic to its conclusion, it’s not just that movements don’t work, it’s that they’re actually a liability. A mass movement takes on a life of its own. A more radical wing of the movement will undoubtedly emerge, and at that point, the liberal leadership loses their grip. The movement might even take aim at the willful inaction of the very politicians they support.

If we want to defend and extend our rights, we can’t look to these organizations for direction.

What Type Of Movement Do We Need?

If they were serious about preventing the death of Roe, the leadership of the women’s movement would have used the leak of the Alito draft to launch a genuine mass movement.

They, of course, did not do this. But young people and working people have taken action of our own in the run up to the ruling. Students have walked out of school in the thousands, tens of thousands marched in the wake of the leak, and dozens participated in direct action at the courts and politicians’ offices. We will need to do much more of this in the lead up to the ruling.

To coordinate this work across the country we need the formation of new women’s organizations that are independent of the rotten Democratic Party and are prepared to fight unapologetically against all attacks on women and queer people. These organizations will need democratic structures, including regular membership meetings, to discuss and debate tactics. They will need leadership that is elected and fully accountable to the movement.

When word comes down that Roe has been overturned, as is likely at this point, that should be a wakeup call to organizations on the left, like the Democratic Socialists of America, and progressive unions, like National Nurses United, to urgently fight for the formation of a new women’s organization prepared to use radical tactics.

Socialist Alternative would enthusiastically participate in such an organization and fight to build it into a vehicle for working-class, socialist feminist victories like free abortion on demand, universal childcare, and paid parental leave.

Until then, we will continue to organize with young women and queer people in every city and town where we have members, carrying out walkouts, occupations, sit-ins, and protests demanding our basic right to bodily autonomy.