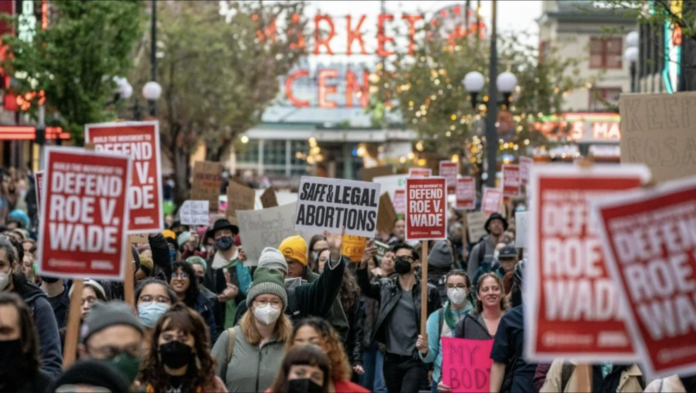 Bia Lacombe is a community organizer in the council office of Kshama Sawant.

Last month, thousands of local activists and young people in Seattle won a landmark victory in the abortion rights struggle — led by the office of socialist City Councilmember Kshama Sawant, we succeeded in our fight to make Seattle the first abortion sanctuary city in the United States since the Supreme Court overturned Roe v. Wade.

Seattle police will now be prohibited from arresting people based on outstanding warrants related to anti-abortion laws around the country, and will also be prevented from otherwise aiding in investigations of those cases. People with abortion-related warrants will be able to live in Seattle without being extradited to whichever state is attempting to prosecute them.

“Laws violating basic bodily autonomy and criminalizing reproductive healthcare are fundamentally unjust, and our movement will not allow Seattle to be complicit,” Sawant wrote in a press release celebrating this pushback against the shameful, right-wing court ruling. “Let anyone threatened by draconian anti-abortion laws come to Seattle without fear of prosecution!”

The entire working class has suffered a serious defeat with the overturning of Roe. Thousands of women and LGBTQ people, as well as abortion providers and other healthcare workers, could be forced to flee their home states.

By winning this legislation, Seattle’s workers, young people, and socialists have demonstrated what it means to be in solidarity with the working class across city and state borders.

Chicago Alderman Byron Sigcho-Lopez and Minneapolis City Councilmember Robin Wonsley, Sawant’s fellow members of Democratic Socialists of America, are planning to push for abortion sanctuary legislation in their cities. Our office has also been working closely with Supervisor Heidi M. Wegleitner of Dane County, Wisconsin, who stood in solidarity with our fight by writing to the Seattle City Council in strong support of our legislation.

The broad support and excitement for our abortion sanctuary legislation in Seattle was as overwhelming as one might expect from the many nationwide polls that indicate widespread support for abortion rights. More than 5,500 people signed our petition in support of the legislation. On the day of the City Council vote, 60 people testified in public comment demanding that Council Democrats vote “yes” without watering the bill down.

Many of the abortion sanctuary petition signatures were gathered by Socialist Alternative members during Pride events in Seattle at the end of June, where we talked to thousands of working-class LGBTQ people about the need for a unified mass movement to defeat the right-wing attacks on abortion, which are fundamentally connected to the vicious attacks on trans youth and queer people we’re seeing across the country.

Socialist Alternative members continued tabling almost daily throughout the month of July, to talk to as many working people as possible and bring them into the fight.

On the online version of our petition, 850 people left comments with personal stories and words of solidarity, including hundreds of union members.

In Washington, we haven’t seen any leadership from the Democrats or their NGO affiliates like Planned Parenthood and NARAL Pro-Choice. Even members of the Squad have declined to take up a real fight based on mobilizing the millions of working people who support them — yet another capitulation to the Democratic leadership they promised to oppose.

The Republicans and the right wing have spent 50 years organizing and building for this all-out assault on women and queer people. Meanwhile, the Democratic Party has spent 50 years promising to protect us by codifying abortion rights, and then completely refusing to fight despite every opportunity. Tragically, this can now be added to the long and growing list of the Democrats’ broken promises of Medicare for All, a $15/hr federal minimum wage, a Green New Deal, and so much more.

At the same moment that they expressed words of outrage over the Supreme Court ruling, Democratic City Councilmembers in Seattle were attempting to undermine our legislation in the backrooms, but refusing to publicly reveal their intentions. They attempted to greatly weaken the clause that now mandates Seattle police not arrest people with out-of-state abortion-related warrants. The only reason the Democrats backed off from this was the spotlight put on them by the hundreds of working people who spoke up and by Sawant’s office, proving the effectiveness once again of a working-class mobilization.

The Only Way Forward

It’s now up to social movements led by working people to defend the basic right to abortion, and also to recognize the most important lesson from this defeat: we need a new party for working people that isn’t tied to the corporations and the billionaires. We need a party that is democratically organized and whose elected representatives will, like Kshama Sawant, take home only the average worker’s wage and are accountable to working people and the oppressed.

Even when we force the Democrats to stand with us, we still cannot afford to draw the wrong conclusions. The Council Democrats did not suddenly become genuine progressives when they voted for our abortion sanctuary legislation — this could hardly be evidenced more clearly than by what happened at that very same Council meeting where we won the abortion sanctuary bill. In that meeting, the Democrats secretly brought forward a vote to end Seattle’s $4/hour pandemic hazard pay for grocery workers.

Our abortion sanctuary petition also includes the hugely popular demand to increase our movement’s Amazon Tax to fund free abortions for all Seattle residents and visitors. We’ll be bringing that legislation forward this fall, as part of our 2023 People’s Budget demands.

A healthcare worker who signed the petition underscored the urgency and importance of this next stage of the fight, writing, “Our country is facing a crisis and we need to act now. If we don’t increase funds and resources for abortions, we won’t be prepared when overflow patients fleeing from Idaho and other red states come flooding in. Abortion clinics in Eastern Washington are already at capacity, and things are only going to get worse. We need to prepare to meet this crisis immediately by raising the Amazon Tax.”

The fight is only beginning. Join us!