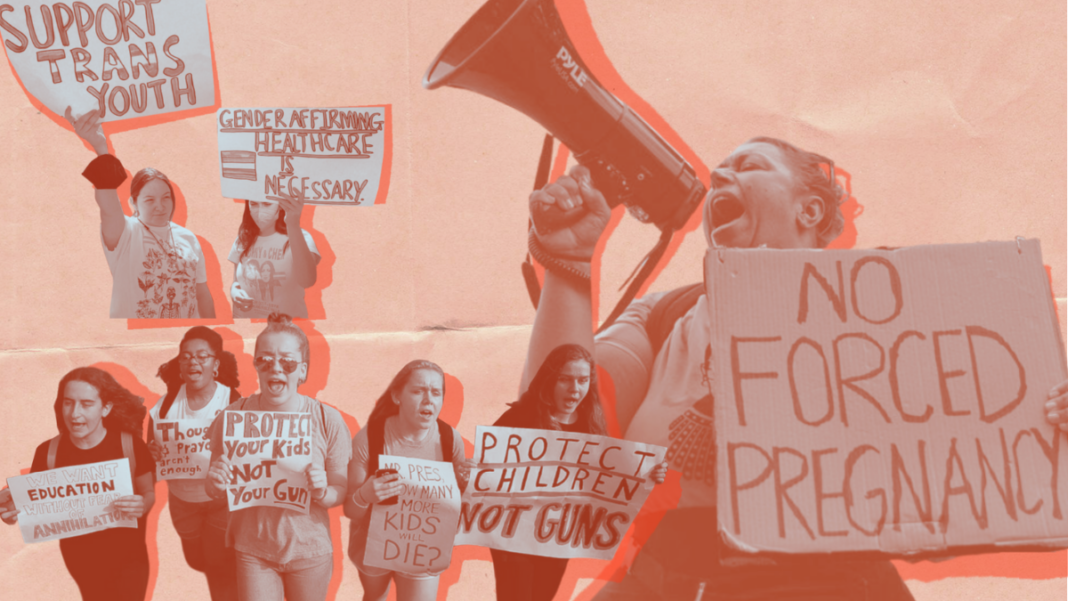 Going into the midterms we are facing a resurgence of right-wing attacks. With the Dobbs decision, the Supreme Court has overturned Roe v. Wade. Right-wing state governments have gone on the offensive with some of the most draconian homophobic and transphobic legislation, with Florida’s “Don’t Say Gay” bill and Ohio’s “Save Women’s Sports Act” providing templates for reactionaries across the country. While Republicans whip up hysteria over “critical race theory” Democrats move to “refund the police.”

The right-wing legislative attacks accompany growing cultural backlash against the ascendant social movements of the past decade. The acquittal of Kyle Rittenhouse and the vitriolic support for Johnny Depp’s defamation case against Amber Heard signify hostile reactions against Black Lives Matter and #MeToo respectively from a section of society.

All in all, this paints quite a devastating picture. This reaction is a real threat and women, people of color, and LGBTQ people are right to be worried. But that’s only one side of the picture. Through the mass struggle of the working class and all oppressed groups, we can beat back the right-wing attacks.

Behind the Right-Wing Resurgence

In spite of the apparent momentum and intensity of the right-wing resurgence, there isn’t an embrace of right-wing ideas by the broad mass of the population. For instance, polls taken at the time of the Supreme Court’s repeal of Roe showed overwhelming majorities, ranging from 63% to 72% depending on the poll, opposed to its repeal.

Nonetheless, in the past few months, the right has been emboldened and the left has been weakened. To challenge the right-wing attacks, we need to understand how this state of affairs came to be.

Biden assumed office with a honeymoon, spurred on by mass vaccinations and the promise to boost the economy with massive infrastructure spending. But with the Covid variants and botched re-opening, the collapse of Build Back Better, and growing inflation, the Biden administration entered a crisis that hasn’t gone away. Right-wing populists pander towards justified anger over low wages, rising prices, and mounting debt. But instead of pointing toward the real reasons for these challenges and their roots in capitalism, these figureheads redirect that anger against the oppressed.

So Adam Laxalt, the Trump-endorsed Senate candidate in Nevada, goes after “the radical left, rich elites, woke corporations, academia, Hollywood, and the media.” While this scapegoating is convenient in the short term for the candidates and media figures who employ it, the ideas they espouse offer nothing in the interests of working-class people, even the ones they successfully deceive into supporting them. It is a dead end that will only severely exacerbate the crises driving mass anger and disillusionment.

While the right is explicit in naming their enemy, the left has fumbled. Bernie Sanders and the Squad have lined up behind Biden. Alexandria Ocasio-Cortez has explicitly prioritized maintaining a Democratic majority in 2022 over challenging the Biden administration. Liberal NGO leaders have followed suit, telling their supporters to vote blue rather than mobilizing them into the streets against the right-wing attacks.

This has resulted in a weakening of movements against oppression, leaving a void of opposition to the Biden administration that the right has been able to fill up until now.

How Do We Fight Back?

We need class politics, and class struggle on a mass scale. Class struggle politics means a recognition that society is fundamentally divided between the masses of working-class people who make society run, and the capitalists who profit off of our work. It also means a recognition that, through our collective action, we can bring society to a halt and even run it for ourselves.

A mass, class-struggle approach can bring about meaningful victories. It can cut across right-wing attempts to sow divisions through racism, sexism, homophobia, and transphobia. Organized counter-protests can beat back attempts of the right to organize with sheer force of numbers. This is what happened the 40,000-strong anti-fascist rally in Boston in 2017 which forced the far-right to retreat in the wake of the Charlottesville “Unite the Right” rally. Organized campaigns need to put forward a positive program that can draw in the mass of the working class to fight back against the right. Campaigns like these can bring about meaningful victories.

Abortion rights were won under the Nixon administration under a Supreme Court with a Republican-appointed majority. This period also brought about fundamental gains for civil rights and labor rights, as well as massive expansion of social services. This wasn’t because Nixon or the Supreme Court were progressive. Rather it was because the 60s and 70s were a time of massive social upheaval. The Civil Rights movement, the anti-Vietnam War movement, the women’s liberation movement, Stonewall, and a wave of wildcat strikes, created a situation where the ruling class was forced to concede.

In contrast, under subsequent administrations in both parties, the Democrats used the threat of the right repealing Roe v. Wade as a means to pressure working people into holding their noses and voting for uninspiring – even widely disliked – corporate Democrats. But when the Democrats were in office they did nothing to enshrine abortion rightss in law. This saw the whittling away of abortion rights, ultimately culminating in the current attacks.

More recently, working-class people were attracted in huge numbers to Bernie Sanders’ promise to be the “organizer in chief” if elected president and Alexandria Ocasio-Cortez’s promise to “govern as part of the movement.” Initially, they provided direction to the class-based struggles that had broken out from Occupy to the Fight for $15 to Black Lives Matter. But as Sanders and Ocasio-Cortez have accommodated themselves, first to Clinton and then to Biden, the right has gained.

The failure of Sanders and Ocasio-Cortez also points to the need for class independence from the Democratic and Republican parties. Many on the left, especially in the Democratic Socialists of America, argue for strategic use of the Democratic Party ballot line, and for support for Democratic politicians as “harm reduction.” However, the experience of recent attempts to rely on the Democratic Party apparatus shows it’s impossible to believe that any harm has been reduced through this strategy..

Challenging the right will require the left, the labor movement, and anti-oppression struggles to break out of the prison of the corporate-run Democratic Party. It will mean building a new party, outside of the two major parties, democratically run by working-class people completely free of corporate finance and rooted in struggle. This will allow us to democratically determine the platform we stand on and how to wield our collective power to achieve it. Through this, we can beat back the attacks of the right and win a life free of oppression and exploitation.