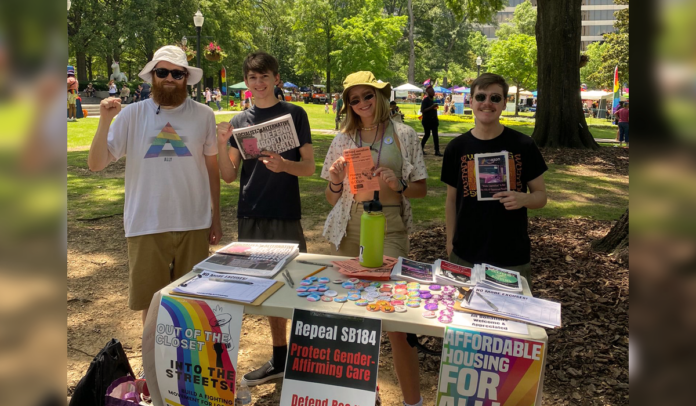 I am a 17 year-old high school student building a branch of Socialist Alternative in Birmingham, Alabama.

My generation, Gen Z, has experienced some of the most radicalizing summers in U.S. history. Since COVID and the Black Lives Matter movement, “activism” has become a regular activity for an increasing number of teenagers. Social media has become a primary tool for young people to express their anger and effectively organize around it for change. As I write this, the outrageous Supreme Court decision to overturn Roe has prompted thousands of graphics to be made and reposted, directing users to their local actions.

Since the events of 2020, we have faced mounting problems resulting from capitalism in crisis. This is amplified in my southern home state, Alabama, where attacks on queer youth and reproductive healthcare have multiplied as Republican politicians seek to bolster their campaigns approaching the midterms.

Laws criminalizing access to gender affirming healthcare and bathroom bills have passed following the wave that kicked off after Florida Governor DeSantis’ “Don’t Say Gay” bill, which limits discussion of sexuality and gender in classrooms. Climate related events have devastated towns in the south while monopolies like Alabama Power are gifted money by the state through a “solar power tax.” Mass shootings and school shootings continue at a terrifying rate across the country, but especially in states that brag about their open carry policies. In my community, youth-led organizations and spaces like Magic City Acceptance Center, March 4 Our Lives, and various environmental groups have materialized in response to these specific problems, demonstrating an undeniable hunger for a wider, more unified mass movement.

The Alabama branch of Socialist Alternative, which had its one-year anniversary in April, has been able to engage with many of these groups this summer. During May, we planned a rally around Governor Kay Ivey’s HB322 and SB184 in Birmingham. HB322 mandates that K-12 students use the bathroom of their birth sex and bans discussion of gender identity and sexuality in K-5, while SB184 makes it a felony to provide gender affirming care to minors. I was able to speak about and advertise our action with the help of a fellow student-organizer who was another key speaker at the rally. I led chants and gave a speech demanding access to reproductive healthcare and an end to attacks on trans youth. The majority of people who came out were high school students from not only my high school, but various high schools around the Birmingham area who heard about the rally on Instagram.

Our next major event of the summer was Pride. Birmingham’s pride celebrations have slowly become more corporatized over time, reaching a peak this year. Linn Park, a common spot for political activism in downtown, was fenced off for Pride Fest and hosted booths for companies like Cricket Wireless and Target. We sold out of all of our pamphlets criticizing this type of rainbow capitalism, and there was a feeling of exasperation from working class people who recalled the shameless cooptation of the BLM banner by companies like Nike during the height of that movement. We ended up raising hundreds of dollars to fund our grassroots organizing, and we and got over fifty names on our “NO MORE EXCUSES: Democrats Codify Roe” petition, proving people’s vexed consciousness around the current political climate and our slipping grip on reproductive rights.

Why I Joined Socialist Alternative

Like many of my peers, I was drawn into the idea of activism to improve conditions for working people after the election of Trump and the protests of 2020. I first encountered Socialist Alternative at an event in support of the Bessemer Amazon workers’ union drive. Members from all over the country had flown down to help with the campaign to unionize Amazon, which was being illegally disrupted by a corporate-led union busting campaign. While door knocking, these members happened to stop by my friend’s house. She asked me to go with her to an Amazon union rally that they had mentioned. At the rally, a member from New York handed us a flyer for a public meeting at Railroad Park (which is now our go-to summer tabling location).

I was so excited by the tenacity of the organizers that I met. The energy that I felt at that first public meeting has carried through our approach to every strategy that we employ in Alabama. We hold in-person and virtual public meetings because young people want to learn about a socialist feminist approach to securing reproductive rights. We table every other weekend because students are tired of living in fear of gun violence in their classrooms. We talk to folks at Pride because high schoolers are done with Democrats failing to do anything real to secure LGBTQ+ rights.

There are things about building SA in Alabama that are unique. In the South, it is easy to fall into the trap of Democratic Party promises because of the consistent political victory of Republicans. Many well-intentioned people believe that the only way left is through the Democratic Party, rather than through a new, working-class led party. The Democratic Party is not an avenue through which liberation can be achieved, which has been made especially clear after the loss of Roe v. Wade. There’s a stereotype of anti-unionism in the South, which cultivates complacent cynicism about the viability of building a socialist party here. In reality, the history of working class movements in the south is rich, and people are ready to fight for better conditions. The fact that there is a thriving Socialist Alternative branch in Alabama is a testament to that.