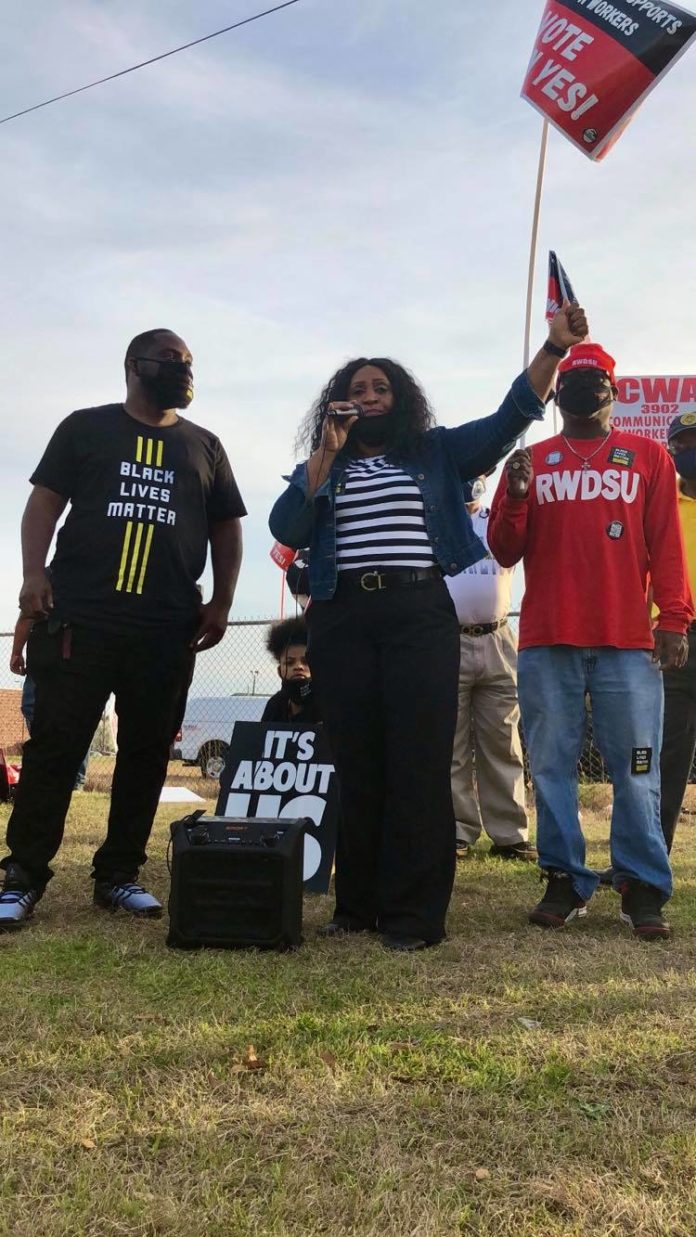 Bessemer, Alabama – On the heels of the biggest protest movement in U.S. history against racism and police brutality, the struggle to ensure that “Black Lives Matter” has entered the workplace. The over 70% Black workforce in Amazon’s BHM1 warehouse is fighting for union recognition. Black Lives Matter Birmingham has been actively building community support for the union drive, including launching Saturday’s car caravan alongside the union.

Amazon workers, union members from Communication Workers of America Local 3902, the IBEW, Black Lives Matter activists, and community members left the event with the invincible feeling you get from the power of the people, the feeling of a movement taking on the richest man in the world.

BLM and the Left Fight for BAmazon Union

In support of the Amazon workers, BLM has united and rallied representatives from the Alabama State Conference of the NAACP, Our Revolution, Concerned Clergy, Alabama Poor People’s Campaign, and more. Bringing fire and analysis, BLM and other speakers discussed the links between the union drive and the struggle for Black liberation.

Co-founder of BLM Birmingham Eric Hall kicked off the speeches:

“We know that Black people ever since the beginning of time, our labor has been taken advantage of… this fight is for all of the Black people that’s fighting to be seen as human, to be heard, so that’s what we’re fighting for and that’s why we’re here today.” 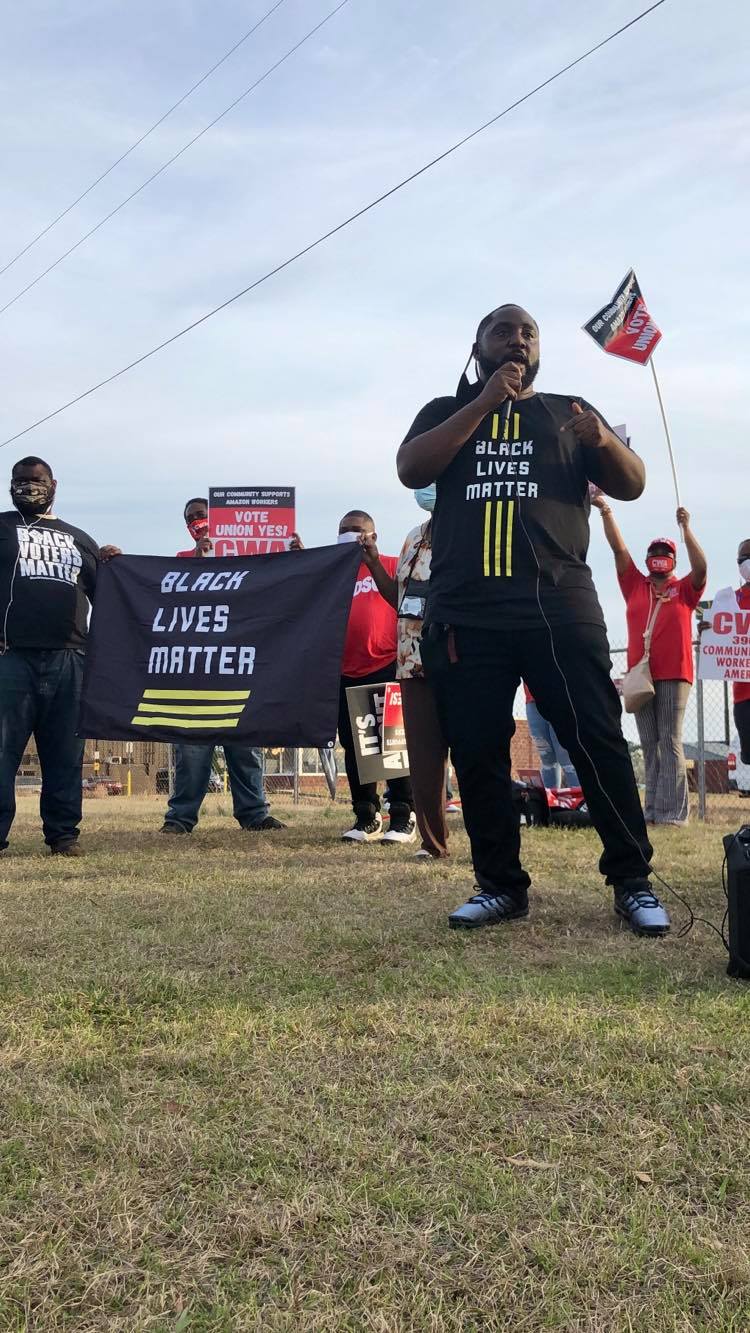 Reverend Thomas Beavers spoke to what a victory for the union would mean for the Black community:

Speakers also highlighted the fact that the majority of the workforce are women, and pointed to the crucial role that Black women have played historically and continue to play today in the fight against racial and gender oppression, exploitation, and poverty.

In the words of Angela Angel from Black Lives Matter Global Network who spoke on Saturday, “part of us being free is economic freedom.” The message was clear at the event: winning a union is the most effective way that we can fight the economic exploitation of Black and brown workers while uniting people of all races and genders in the fight against exploitative working conditions and inadequate pay.

Alongside BLM, RWDSU, and the aforementioned community groups, DSA Birmingham, the Party for Socialism and Liberation, Socialist Alternative, and others also helped to build for the event during the weeks prior. Socialist Alternative members on the ground spent last week door knocking and tabling in the community every day to mobilize for the event, as well as speaking with local union leaders and attending the Central Alabama Labor Federation to help mobilize the local labor movement. 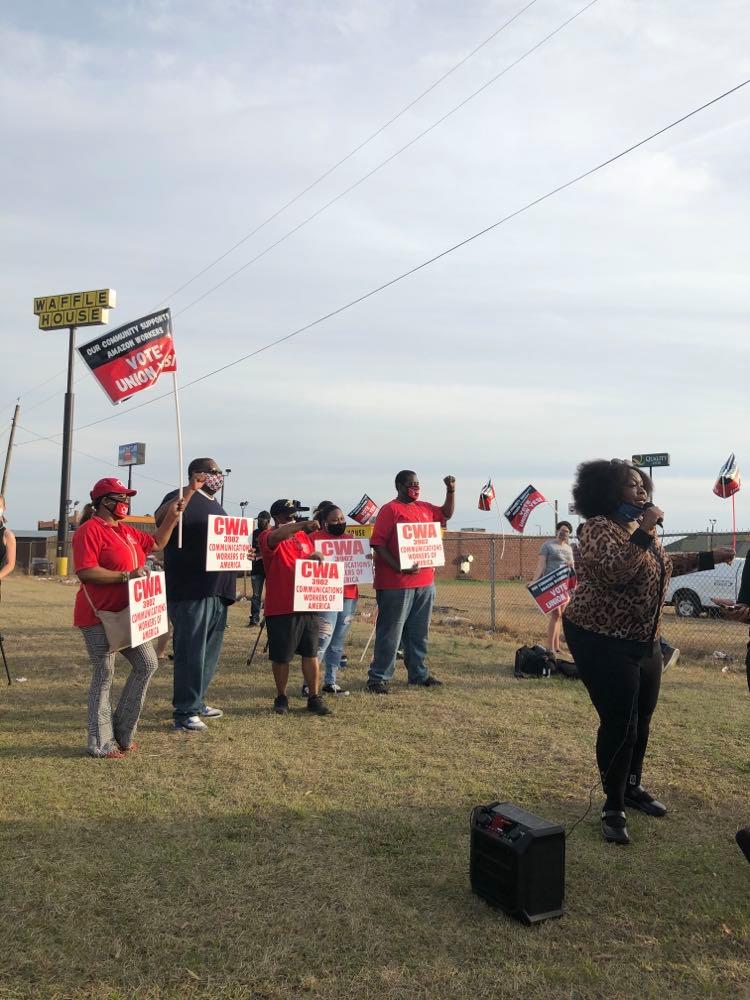 CWA members out in solidarity with Amazon warehouse workers fighting for a union. 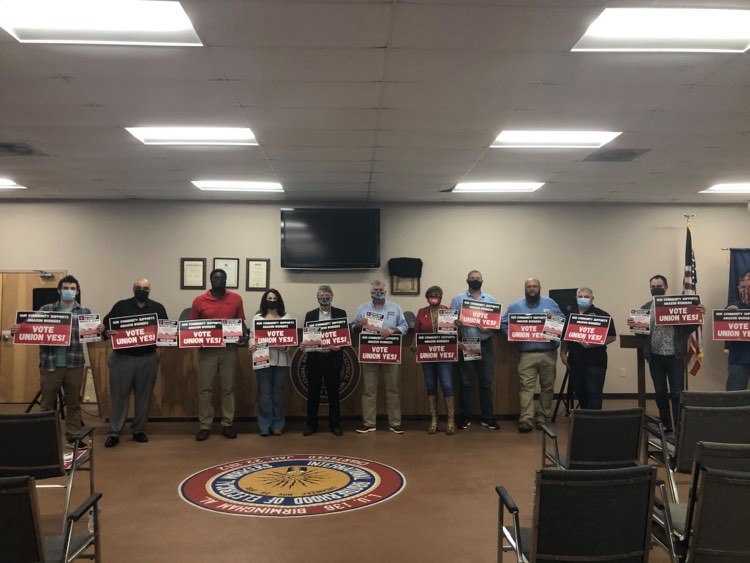 Socialist Alternative members attended the Central Alabama Labor Federation on March 11 to mobilize the labor movement to the car caravan.

The solidarity from CWA and IBEW was crucial on Saturday to show Amazon workers that they are not alone in this union drive and that – if they win – they won’t be alone when it comes time to fight for a first contract. This can help to build the confidence of workers at BHM1 who are feeling the heat and intimidation from Amazon. The labor movement also has a vested interest in a victory here. While working people have been on the back foot for decades, if workers in Bessemer, Alabama can take on the biggest corporation in the world and win, it could serve as a shot in the arm for the rest of the labor movement. The message would be that when we fight, we can win, and if we won here we can win anywhere.

The vote to form a union lasts only through March 29. Unions locally and nationally, but especially locally, should ramp up their mobilization to stand shoulder to shoulder with the 5,800 workers who are taking on the beast that is Amazon. March 20 is a national day of action, and union members, socialists, and anyone with a vested interest in fighting the exploitative greed and racism of the bosses should attend or organize an event in their area. Union members should consider getting their unions to pass resolutions in support of Amazon workers.

To win the battles ahead, from this union drive and beyond, will require building a labor movement committed to fighting for economic demands alongside demands against racist policing, segregationist policies in housing and education, white supremacist violence against communities of color, and sexism and misogyny. This will require overcoming the divide-and-conquer mentality of the ruling class, which has used racism and sexism for centuries to keep workers fighting among ourselves: the BAmazon union movement provides an inspiring example of how working people can unite to fight in our best interests.

What Will it Take?

Amazon is pulling out all of the stops to intimidate workers, bringing them into captive audience meetings, sending anti-union texts, plastering the warehouse with anti-union messages, and using COVID as a cover to strictly enforce six-feet social distancing in the warehouse to prevent any discussion among workers about the union. Notably, these social distancing protocols weren’t enforced when COVID was spreading in warehouses across the country early in the pandemic, but of course in the face of a union drive, Amazon is more than happy to promote “a safe environment” if it hurts the union. The extreme atomization in the warehouse and Amazon’s anti-union brainwashing can have an effect, and workers and the community fighting back is the only antidote.

The movement in Bessemer against racism, sexism, exploitation, and poverty will need to pull out all our stops too, going all out for the March 20 rally and BBQ, canvassing in the community, and reaching every worker to make sure they know that the community and labor movement have their back, and that we can improve our lives when we stand united, in union, against the bosses. 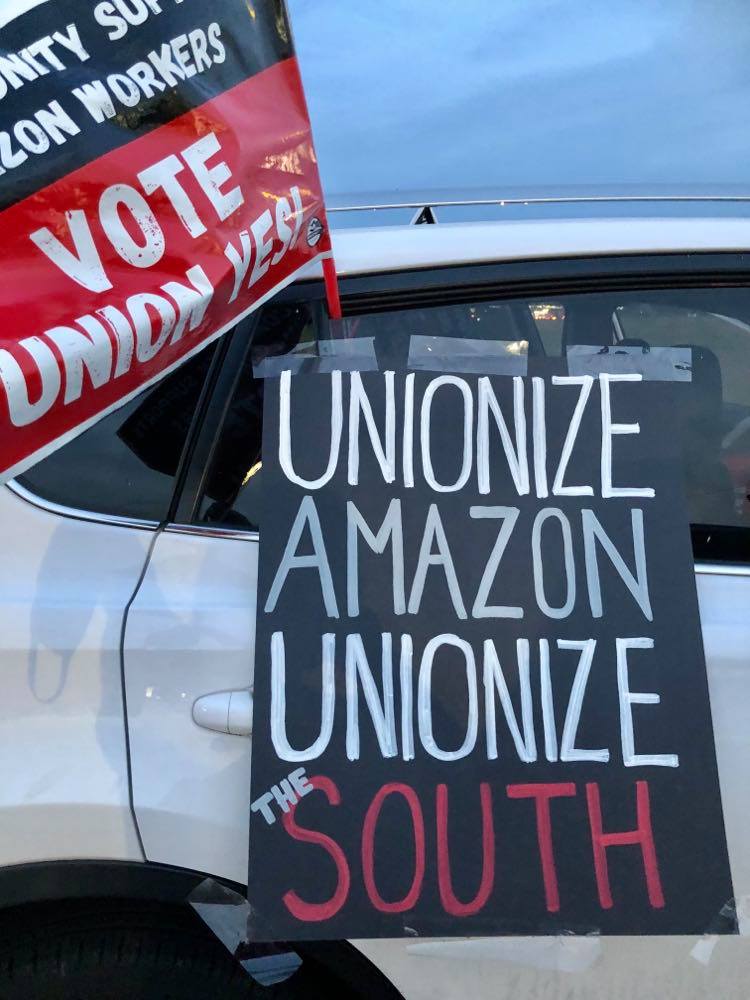