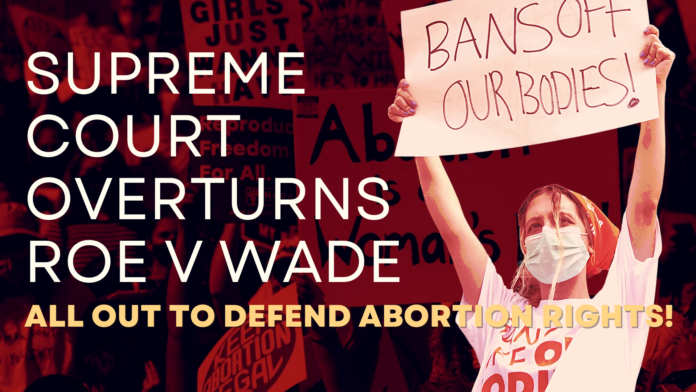 A draft decision leaked to Politico, released last night, indicates that the Supreme Court is on the precipice of overturning Roe v. Wade, the landmark decision that legalized abortion.

The potential impacts of this are staggering. 13 U.S. states already have some form of “trigger law” on the books, meaning that abortion would be partially or completely banned as soon as the decision was implemented. What’s more, the precedent set by the decision as currently written would set the stage to undermine other massive precedents like gay marriage, contraception access, and even interracial marriage.

That’s why we need to hit the streets, TODAY. Socialist Alternative has organized protests in cities nationwide (check this updating thread to find a protest near you). When Roe v. Wade was first won in 1973, it was in the context of a majority-Republican Supreme Court and a reactionary Nixon presidency. How did we win then? By organizing a massive groundswell in the streets for abortion rights.

Want to get up to date on the struggle to defend abortion rights? Socialist Alternative has written extensive material on this right-wing threat and what will be needed to defeat it. Here’s your pre-protest reading list:

The Fight to Defend and Extend Abortion Rights Internationally and in the U.S. || Erin Brightwell

Biden Has Always Been Bad on Abortion Rights || Erin Brightwell

Their Courts Won’t Save Us || Alicia Salvadeo

We have a critical opening to push back against the court’s initial decision and defend Roe v. Wade. But we need more than that – abortion access has been eroded away in state after state. We need a mass movement to fight for the federal legalization of abortion and Medicare for All, with free, safe, and legal abortions on demand!

So far, the Biden administration has only called to “have options ready” when the Supreme Court rules, and to focus on electing more Democrats in the midterms, despite a campaign promise to codify Roe as the law of the land. With a majority in the House and Senate, the Democrats should have already overridden the filibuster to pass a full legalization of abortion. Instead, they’re cynically using the abortion ruling to fundraise for the midterms.

We need an independent, mass working-class party that will fight to protect the interests of women, queer people, and people of color! We need democratic socialists like Bernie Sanders and Alexandria Ocasio-Cortez to publicly call for and lead protests, and ultimately break with the Democratic Party that has failed abysmally to protect our rights.

Attend a protest TODAY, and look out on our social media for further organizing steps to fight back against these attacks!