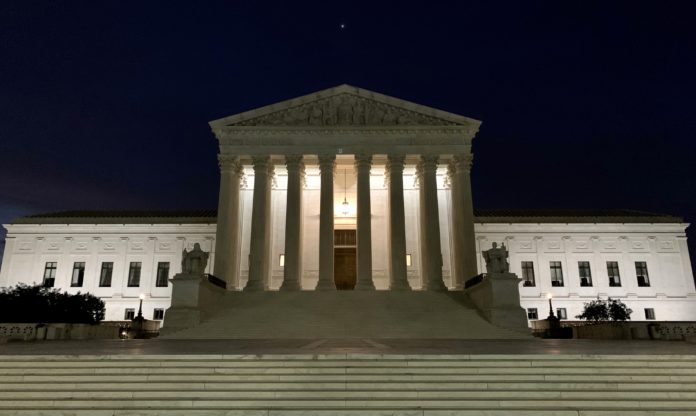 In the lead up to a harrowing decision that will determine the fate of abortion rights in the U.S., a majority of ordinary people now disapprove of how the Supreme Court is handling its job. Historically the Court has enjoyed much higher approval ratings; but its slipping credibility joins the overall declining confidence in the government, from the presidency to the healthcare and criminal justice institutions.

For centuries, the myth that the Court stands above society as “objective” has allowed it to act as a significant accomplice to attacks on workers, women, people of color, immigrants, and LGBTQ people. Today, an overwhelming majority are rightfully skeptical of the court’s impartiality, especially as judicial appointments play out as partisan bloodbaths. Who could forget, after facing sexual assault allegations, Brett Kavanaugh’s chilling warning that “what goes around comes around” as he assumed authority over the law of the land?

Recently President Biden nominated Ketanji Brown Jackson to replace Justice Stephen Breyer, who is set to retire later this summer. Jackson would be the first Black woman appointed to the Supreme Court. Praised by Biden as a “consensus builder” and endorsed by the Fraternal Order of Police, even this center-moderate pick faces intense scrutiny from the GOP as we go to print. Regardless of who is appointed, this increasingly unpopular institution will maintain a firm right-wing supermajority, posing a threat to the democratic rights and survival of millions across the country. How do these random elites in robes have so much control over our lives and our rights, and what can we do about it?

Supreme Court: Guardian of Democracy or the Ruling Class?

Despite its anointed role as the “guardian of the Constitution” and “equal justice” under the law, the reality is that the U.S. Supreme Court is a supremely undemocratic institution. Marxists understand that, under capitalism, the courts, the police, and the political establishment are designed to work hand-in-hand to defend the interests of the wealthy. The state as a whole exists to mediate antagonisms between the ruling and exploited classes, whether by force or by “democratic” means, and always in favor of the former.

Supreme Court justices serve lifetime appointments by the president and are approved by only a simple majority in the Senate. There is no democratic election or recall, and they have full discretion over what cases to hear. As socialist Eugene V. Debs summarized in 1918, “corporations and trusts dictate their appointment… not to serve the people, but to serve the interests that place them and keep them where they are.” Like the equally outdated electoral college, its purpose is to curb what James Madison called the “tyranny of the majority.” The country’s founders feared the genuine democratic rule of the masses, who had just overthrown the British monarchy during the American Revolution. Any government acting through and for the interests of the working class, poor, and oppressed would be at the expense of the minority–those who owned businesses, land, and slaves. Thus the Supreme Court’s fundamental role has always been to act as a check on working people, and to safeguard the capitalist class’s power.

But the capitalist class is far from unanimous on how to best do that. Neither neutral nor static, the Supreme Court serves as a decisive battleground for these debates. Ultimately responsible for interpreting the vague terms of the U.S. Constitution – written by and for the elite – it’s free to construe the law to suit the needs of the rich during any time period. The Court is therefore subject to pressures from competing sections of the ruling elite – as well as to substantial pressures from below when and if they’re exerted. This explains its checkered history of both reactionary and progressive decisions.

Justices representing the more conservative capitalists typically rule from a position of “intentionalism,” or “originalism,” that is, interpreting the law based on what the original founders had in mind in the 18th century. In 1883, Frederick Douglass denounced the “autocratic” Court’s backwards nature as it deemed the 1875 Civil Rights Act unconstitutional, which kicked the door open to legalized racist segregation in the decades following slavery’s abolition:

“When we said in behalf of the Negro that the Constitution of the United States was intended to establish justice and to secure the blessings of liberty to ourselves and our posterity, we were told that the words said so but that that was obviously not its intention; that it was intended to apply only to white people…”

The Court doubled down with its decision on Plessy v. Ferguson (1896) and many other racist decisions. But less than a century later, a shift in society, reflected in the growing Civil Rights movement, compelled the Court to change course with Brown v. Board of Education (1954), which swept away the Jim Crow doctrine of “separate but equal,” and Atlanta Motel v. US, which upheld and strengthened the new Civil Rights Act of 1964. In other words, where landmark judicial victories have been won, it’s been as a result of organized mass movements.

A more forward-thinking section of the ruling elite understands that sometimes concessions are necessary to cut across further working class action against the bosses, landlords, and the rich. It walks a tightrope to curtail radicalization and social upheaval, which would threaten business as usual. This is why a conservative SCOTUS ruled in favor of abortion rights in 1973. In the lead up to Roe v. Wade, pro-choice feminist and socialist organizations staged mass demonstrations and direct actions across the country, not just in the name of abortion rights, but women’s liberation, in line with the revolutionary energy of the Civil Rights, anti-war, and labor struggles of the 60s and 70s. The Court was not suddenly morally convinced of the right to abortion: it was convinced by the possibility of an explosive backlash against an unpopular decision.

The Supreme Court’s recent track record reflects significant breakthroughs for the capitalist class’s reactionary wing. Three cases in particular set the stage for the systematic attacks we see today. In 2010, Citizens United v. FEC prohibited the government from limiting corporate political campaign expenditures under free speech protection. This essentially allows big businesses to write blank checks to preferred candidates and ballot measures. In 2013, it dismantled key provisions of the Voting Rights Act, which has dramatically marginalized poor and minority voters particularly in the South, and has consolidated the right’s grip on school boards, local courts, and legislative offices. A third major blow came when Janus v. AFSCME extended “right to work” to public sector unions. This weakens workers’ ability to organize by exempting non-union members from paying union dues, even though they benefit from union-negotiated contracts.

Republicans were afforded a huge opportunity to pack the Court with truly despised ultra-conservatives during the Trump years: Gorsuch, Kavanaugh, and Coney-Barrett joined the bench, all hand-picked by dark money and far right forces. Trump’s shortlist of judicial nominations was drafted by the Federalist society, which champions “intentionalism” and states’ rights. This 6-3 reactionary majority is now at the disposal of an emboldened right-wing offensive, and abortion rights are in its most immediate crosshairs.

The pro-corporate assault on working people’s ability to organize was possible in the absence of mass struggle in workplaces and the streets, with no strategy for action coming from labor leadership. These losses have put labor and the women’s movement at a huge disadvantage in the face of Roe v. Wade’s likely overturn, which is already sparking fear that same-sex marriage could be clawed back as well. A shining victory of this past decade, marriage equality stands out as such because of the well-organized move­ment that fought for it in every state, convincing the Court that millions were prepared to act to defend this right. What was needed immediately afterward, as well as after Roe v. Wade, was a continued independent struggle to defend these gains against conservative counter-reaction, and go on the offensive for more.

Build a Mass Fightback from Below

The question now is, how do we defend women and workers from further attacks handed down by the Supreme Court? Democrats will undoubtedly urge voters to “vote blue no matter who,” while some advocate for adding more justices in order to “pack the court” with more liberal or diverse judges. This is the same party that relinquished Obama’s moderate Supreme Court nomination to the GOP, and failed to put up any serious opposition to Trump’s picks after years of mounting attacks and decisions against reproductive rights. While having more progressive judges may help, history demonstrates this is neither permanent nor impervious to corporate interests. By affirming her own “originalist” position and rejecting the notion of a “living Constitution” that evolves with the times, Biden’s pick of Ketanji Brown Jackson suits ultra-conservative establishment quite well. These strategies can’t resolve the undemocratic and pro-business nature of the Supreme Court, or the two corporate parties vying for influence.

Some pro-choice activists have abandoned one defensive approach for another, and have instead focused on developing mutual aid networks to work “underneath” the law as the state increasingly restricts abortion access. But anything short of organizing mass resistance will allow the right to create an even more repressive environment for ordinary workers and women to organize within.

Our real power comes from outside the halls of capitalist state institutions. We need to rely on successful methods for fighting anti-worker and anti-women attacks. This means building independent mass movements to coordinate direct action in the streets and our workplaces. To prevent Roe’s overturn this summer as the Dobbs v Jackson Women’s Health Organization decision comes down, we would need to rapidly organize mass days of action, civil disobedience, and workplace action. Young women in particular have taken the lead in recent labor strikes and union drives, and have come into the streets time and again over the past decade to fight racism, climate disaster, and the right. A vibrant, militant women’s movement is our only defense against the erosion of Roe.

As long as capitalism remains intact, every victory is temporary as the ruling class calculates its next opportunity to reverse it. We need to go on the offensive for expanded democratic and economic rights, including legal, safe, and free abortion on demand, full protections for LGBTQ workers and renters, and strong rank-and-file unions unfettered by the limitations designed by the bosses.