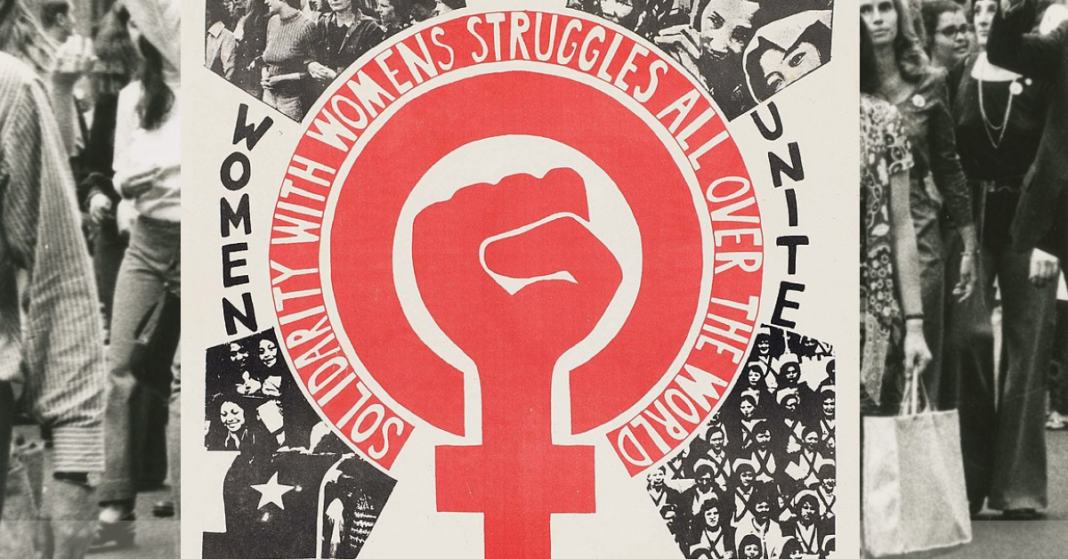 What does it mean to be a working class woman? It’s fighting to survive against pressure from all sides. Sexism follows you everywhere. Take orders from your boss all day in return for 83 cents to a man’s dollar – or even less if you’re Black or Latina – while tolerating gender discrimination and sexual harassment in the workplace. On your way home, remember to stay aware of your surroundings, don’t invite any unwanted attention or put your guard down, all while passing advertisements urging you to spend money to become as attractive of an object as possible. When you get home, the real work has just begun, because it’s more likely than not that the cooking, cleaning, laundry, driving, and most of the childcare is on your shoulders. Don’t want a child? “Just don’t get pregnant!” In other words, be lucky enough to have access to contraceptive care, and try at all times to not be the one woman sexually assaulted every 75 seconds in the U.S. Maybe you can access an abortion if you need one, but then again, maybe you can’t.

Anyone who claims the capitalist system offers equality, choice, and safety for women is lying through their teeth. COVID-19 has only made it worse. The ‘shadow pandemic’ of skyrocketed domestic violence shows just how brutally the consequences of economic and social crises fall on women, especially those trapped at home with their abusers. Millions of women have been shoved out of the workforce, from either lack of childcare or being concentrated in service jobs, resulting in a crippling and likely long-term loss of wages and a 25-year setback in maternal employment. The attacks on abortion rights already in effect in Texas and being threatened elsewhere, including the Supreme Court, could set us back 50 years in the fight for reproductive rights.

How is it possible that we’re going backward? To understand this, we have to look at the origins of gender oppression.

Back in 1884, Friedrich Engels put forward a pioneering Marxist analysis stating that the subjugation of women, so taken for granted in his time, was not a natural state of affairs but a result of class society. In Origin of the Family, Engels argued that in collectivist, kinship-based hunter-gatherer societies, women’s role was not devalued and women were not systematically oppressed. Over thousands of years, however, the advancements in agriculture and food production introduced a surplus, with clans no longer living hand-to-mouth but having grain and other means of subsistence left over. Ownership of this surplus became the earliest iteration of ownership of the means of production, and so ascended an economic and social ruling class. With a new society taking shape around private property, the patriarchal family system became necessary for these owners to organize its transfer from one generation (of men) to the next. Violence against women became central to enforcing this new social order, where ruling elites were owners of not only the surplus and the wealth, but also of the means of inheritance – in other words, women.

Between then and now, much has changed and much has stayed the same. Women can work, can vote, and over a century of feminist activism revolutionized consciousness around women’s place in society. You’d find very few ordinary men who see women as their inferiors. So why are we still oppressed? Because the blame is much wider than individual men. All of us, regardless of gender, are ruthlessly exploited by the same ruling class, now a capitalist one. From our bosses, regardless of gender, making our work lives miserable; to the corporations keeping our wages low and our costs of living high; and the politicians depriving us of bodily autonomy, we have much less of a say in our lives than they seem to.

If you’re on Tiktok, you’ve probably seen the memes of young women poking fun at what they see as the toxic “gaslight, gatekeep, girlboss” brand of feminism. These are the Hillary Clintons and Ivanka Trumps of the world who equate their own success within the ruling class as real social progress. What good is it to see a female politician or CEO “break the glass ceiling” or “build her empire” while the rest of us, the vast majority, are stuck in the same place as before?  Maybe they’re also the JK Rowlings who exploit a grotesque caricature of “radical feminism” to attack trans women and deny their womanhood.

If women’s empowerment means successful women punching down in the name of feminism, today’s generation isn’t having it.

No wealthy ruling-class ‘girlboss’ will tell you about the women mill workers of the 1800s who organized against low wages, unsafe working conditions, and sexual harassment on the job. They won’t herald the women abolitionists and radical Black feminists who played a critical role in winning emancipation from slavery, fought Jim Crow, and marched for civil rights. The mass strikes, protests, and occupations that won Roe v. Wade have received little mention from these self-appointed spokespeople. And the last thing they’ll want you to know about is the women revolutionaries who, as part of a mass movement, overthrew capitalism in the Russian Revolution and launched a conscious campaign for full liberation. These socialist feminists ensured that legal abortion, free gender confirmation surgery, divorce rights, jobs for women, socialized domestic work with public nurseries, laundries, and cafeterias were guaranteed.

Capitalism needs gender oppression – but we don’t. Like racism, homophobia, transphobia, and xenophobia, sexism is created and upheld by the ruling class to ‘divide and conquer’ the working class while they continue to carry out exploitation. If you’re fed up with the sexist status quo, join Socialist Alternative and help us take on the real culprits.