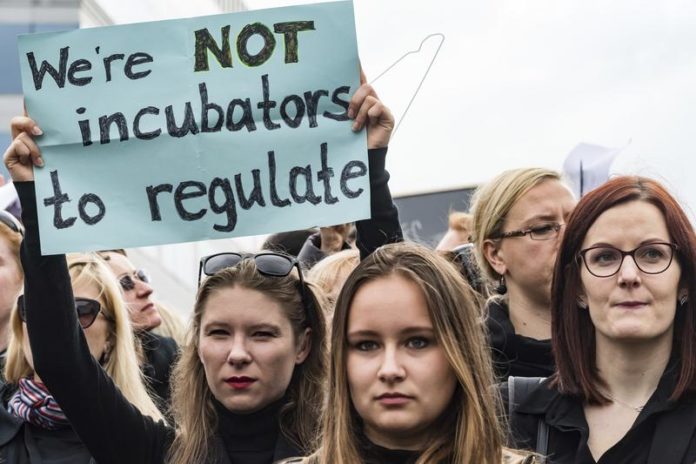 Women in Texas have been living under the shadow of Senate Bill 8 for six months now. This bill criminalizes virtually all abortions starting after five to six weeks of pregnancy. This is before many would even know that they’re pregnant. Rather than being enforced by the state, the ban works by allowing private citizens to sue providers, patients, or anyone who “aids and abets” an abortion for a fine of up to $10,000, putting enforcement directly in the hands of the sexist “pro-life” right-wing. There are no exceptions for pregnancies that are the result of rape or incest, and it has been called the most brutally restrictive abortion law in U.S. history since the Roe v. Wade Supreme Court decision ensured the right to abortion in 1973.

​​Abortions have dropped by 60% in the state of Texas, as thousands have fled the state to access care elsewhere, which has been very costly for working class women. Others have been forced to continue a pregnancy against their will. While this shameful crackdown dealt an unprecedented blow to reproductive rights, it is just one of over 1,300 laws passed in states across the country since Roe that have chipped away at abortion access for working-class women in particular.

This spring, the majority-conservative U.S. Supreme Court will decide on a case that could deal an even deadlier blow to abortion rights in the U.S. This is Dobbs v. Jackson Women’s Health Organization,which could result in allowing bans on abortions after just 15 weeks.

If the court decides in favor of Dobbs, this would mean that Roe v. Wade, the defining victory of the radical mass women’s movement of the 1960s and 70s, could be virtually nullified by the time of its 50-year anniversary in 2023. This is, of course, unless there is a massive fightback to stop it.

A nationwide day of action in protest of SB8 drew tens of thousands of people out on October 2 last year, but a widespread fightback to defend abortion rights has not yet materialized. Much of the responsibility for this lies with the traditional women’s organizations, overwhelmingly NGOs and nonprofits closely aligned with the Democratic Party’s approach.

During Trump’s presidency, as he was handcrafting a reactionary Supreme Court with the distinct purpose of overturning Roe, they did virtually nothing to organize a fightback. They turned the second Women’s March, which could’ve been a launching pad for a more sustained struggle, into a “march to the polls” where all we were instructed to do was vote for the nearest Democrat.

Every election cycle, the Democrats campaign on being the “pro choice” party who are going to defend Roe v. Wade. But now that the Democrats are in power at the federal level, they have done nothing whatsoever to fight the attacks from either Republican state legislatures or the Supreme Court.

As the Dobbs decision draws closer, it is critical that we take inspiration from victorious women’s struggles internationally and from history to build a mass movement to defend and extend reproductive rights.

Senate Bill 8 went into effect in September just as the struggle for abortion rights reached a milestone in Mexico, when the criminalization of abortion was declared unconstitutional.

This victory would not have been possible on the basis of relying on the courts themselves or the political establishment. It took years of building organizations, a cross-border Green Tide movement, and mass mobilizations to apply pressure from below. The same was true of the victorious movement in Argentina that won abortion rights at the beginning of 2020. This unrelenting, movement-driven approach will be necessary in the U.S. and everywhere there are ongoing attacks on women’s reproductive freedom.

If there’s anything we’ve learned in recent years, it’s that movements in one country or region can spread like wildfire. This is especially the case when there is a victory that shows the path forward to fight the various forms of sexist oppression that women face all over the world.

Where is the U.S. Women’s Movement?

In the U.S, ever since the ground shaking developments of the Women’s March and the #MeToo movement in 2017 and 2018, the women’s movement has been on the defensive, even as the pandemic severely worsened the crisis facing women.

And while girlboss feminists and traditional women’s organizations have done little to build a decisive fightback, the forces exist to protect abortion rights and fight harrassment and violence against women.

They are to be found in schools where, since returning in person, high school and college students organized a wave of demonstrations and walkouts fighting against sexual harrassment and assault.

They are to be found in the labor movement where women have played an outsized role in the revival of the class struggle. We saw this from the Red for Ed teachers strikes, to a 9 month-long nurses strike in Worcester MA last year, which began on International Women’s Day 2021. Just months ago during the Washington Carpenters strike, even in the historically-conservative building trades, a rank-and-file group pushed for the union leadership to act on sexual harrassment and assault on construction sites.

These forces are showing they are ready to fight, and it’s workers and youth that are going to be key in leading the new women’s struggles needed to push back on attacks from the right.

As the right ramps up their attacks on women and queer people in particular, the rest of the working class should be on alert. If they are able to land a decisive blow against reproductive rights, they will not stop there. Their brutality will reach all corners of the multi-racial, multi-gender working class and because of this we will need a unified movement to beat them back.

March 8 is International Women’s Day, a day that was born out of strikes, marches, and revolutionary struggle. It will take nothing less than these same tactics to fight attacks on bodily autonomy, and we must set our sights on fighting for a future where gender violence, control of womens bodies, and all forms of capitalist oppression are things of the past.