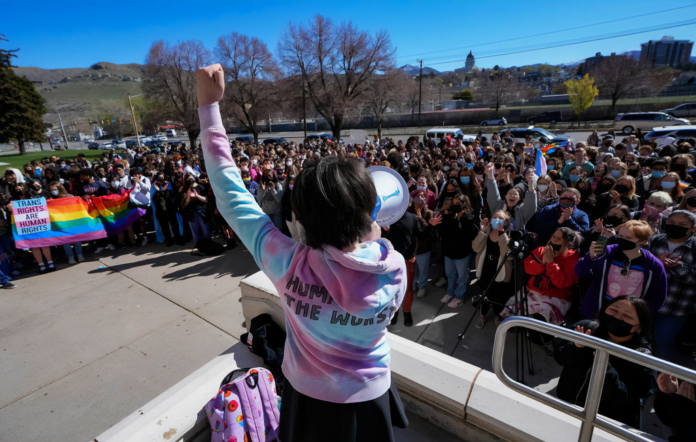 On April 7, 26 year-old Lizelle Herrera in Texas was arrested and jailed on a murder charge following a stillbirth delivery. Though not all of the details are clear, it appears that the hospital she attended reported her to the authorities for “knowingly self-inducing her abortion.” She was apprehended at the hospital by a sheriff and charged with second-degree murder.

After reproductive rights activists organized a protest at the Starr County Jail where Herrera was being held and calls flooded in from across the country, the district attorney was forced to drop the charges. Despite the backtrack, what happened to Herrera is chilling – especially when considering what might have happened if mass struggle had not intervened.

State legislatures this year have introduced and enacted a flurry of reactionary laws, both restricting abortion access and restricting the rights of trans youth. As Herrera was sitting in jail for her stillbirth in Texas, families of transgender youth in the same state were being investigated by the Department of Family and Protective Services for supporting their adolescents’ transitions thanks to a new order from right-wing Texas Governor Greg Abbott.

But the phenomenon goes far beyond Texas, with over 230 abortion restrictions introduced in state legislatures so far this year, and over 240 anti-trans bills introduced in the same time span.

These reactionary laws will have a devastating impact on women and queer people, especially if the Supreme Court overturns Roe v. Wade when it rules on Dobbs v. Jackson later this year. But ultimately these laws do not benefit the working-class base of the Republican Party either – instead, this culture war serves as the cheap substitute for the economic relief that working people need but the big-business GOP will never provide.

Instead of offering an alternative, the Democratic Party’s response to these attacks has been totally inadequate. The “fight back” from the ostensibly more progressive party has been largely limited to mealy-mouthed tweets that call to “stop hate” instead of mounting a genuine struggle to codify access to abortion and gender-affirming care.

But the right-wing attacks this year have ramped up quickly, and working-class women and queer people need a way out. Instead of allowing women’s struggle and queer struggle to play out in parallel, we need one unified mass movement against gender oppression.

It is clear that the working class is broadly under siege. These events are part of a much broader right-wing offensive across the country attacking reproductive rights, enacting racist voting restrictions, banning trans children from gender-affirming care and school sports, criminalizing protests and increasing police funding in backlash to BLM, and a return of “law and order” governing in Democrat-controlled cities to criminalize homelessness and the poor.

The right wing is actively pitting the rights of women and queer people against each other, such as in the case of trans childrens’ participation in sports. The right wing falsely argues that the existence of trans women in “women’s spaces” is threatening to the safety and success of cisgender women. This is a prime example of a divide-and-rule strategy aimed at preventing cis women and trans and nonbinary people from fighting on a unified basis for bodily autonomy.

Women and queer people suffer many of the same oppressions under capitalism. Many queer and trans women are under attack as a result of these anti-LGBTQ bills, and trans men and nonbinary people will struggle to access abortions and reproductive care under new restrictions.

The struggles of trans and cis women are especially linked. Transgender women are at high risk of experiencing both transphobic and misogynistic violence. Arguments against the participation of trans women in women’s sports actually lean on incorrect, sexist ideas that all people assigned male at birth will be automatically more athletic than anyone assigned female at birth, ideas that harm cisgender women too. Both working-class women and trans people of all genders are at heightened risk of workplace discrimination, domestic abuse, and struggle for basic healthcare needs that are restricted or unaffordable.

Building a united struggle against gender oppression will not be automatic, and a huge part of that fight will be overcoming the right-wing propaganda meant to divide us. But it was not the establishment and the courts who handed down victories like the right to abortion in the first place – it was us. It was mass movements from below led by working people that forced the hand of the courts to follow suit and cement these victories into law.

As we’re seeing now, even these massive gains are always at risk of being revoked under capitalism. NGO-driven court battles are insufficient to actually stop abortion bans and gender-affirming care bans from coming into effect and threatening our safety. Politicians of the two corporate parties cannot be relied on to provide leadership for a movement against these bills. Actually defeating these attacks, and building a sustained challenge to the right, will take a united struggle of ordinary people.

Building a United Fight Back

Students in many states have led walkouts in response to the “Don’t Say Gay Bill” and other anti-trans legislation. Additionally, on college and even high school campuses, young people are turning out in the hundreds to lead protests against sexual assault and racism. These youth led direct actions point toward the type of bold strategy that is needed to protect the rights of women and LGBTQ people.

Women and LGBTQ people have everything to gain by fighting collectively for bodily autonomy. We need Medicare for All that provides free, easily accessible abortions and contraception as well as fully covered gender affirming care. We need an end to the nonstop street harassment and sexual assault faced by women and queer people. We need trans inclusive, consent based sex education in schools. The demands of the women’s and queer movements are intimately tied up with one another and winning them will require a common struggle based on mass direct action.

There is a massive hunger for social change especially among young people – the establishment and politics-as-usual is standing in the way. We need to build a sustained fighting movement against the right and ultimately against capitalism to achieve a world without misogyny and transphobia.