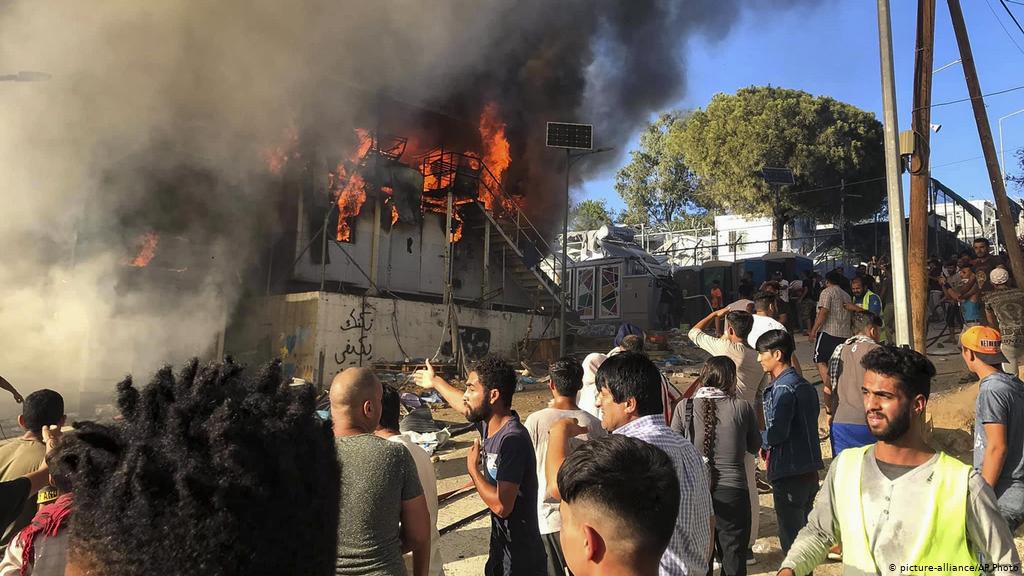 Over 40,000 refugees are trapped οn the Greek islands near the Turkish coastline, living under horrific conditions at Refugee Camps which were designed to host one fifth of their current inhabitants. During the winter, tens of thousands of refugees had to deal with the bitter cold and snow on their tents and heavy rains that soaked everything and left them living in the mud for days. The food provided by the government and the NGOs is far from enough and thousands have to provide for themselves. Access to doctors is also extremely scarce.

The covid-19 pandemic made things even worse, since the hygiene conditions in the camps are horrendous. For example, in Moria Camp on the island of Lesvos there is only one water tap for every 1,300 refugees.

Moria is the most populated refugee camp. Although its official capacity is 3,000, there are 12,500 refugees living in and around it.

A big part of Moria was burned down on Tuesday September 8. New fires broke out on Wednesday and Thursday. This is not the first time a refugee camp has burned down. In April, big parts of the refugee camps on the islands of Chios and Samos were also burned down. In addition, at least two camps on the mainland where refugees would be relocated were burned down by far right groups who wanted to keep refugees out of their municipalities. The article that follows was published on the Xekinima (ISA in Greece) website on Tuesday afternoon, after the first fire on Moria Camp.

The fire that broke out on the night of Tuesday, September 8, at the Center for Registration and Reception of Refugees and Immigrants (KYT) in Moria, Lesvos, highlighted once again the inhuman conditions faced by refugees in the camps, but also the failed government policy in relation to the management of the refugee flow.

The first images from the fire in Moria automatically create feelings of sadness and anger. The result of the fire is that 12,500 refugees are left without shelter, with most of them initially moving either in the direction of the nearest residential areas or to the mountains, to be saved from the flames. At the same time, police forces set up barricades to prevent refugees from approaching any residential area.

The government directly blames the refugees for arson, linking it to the announcement of 35 coronavirus cases in Moria and talking about riots that occurred because some of the patients refused to be quarantined together with their families in warehouses just outside the detention centre. It is certainly not the first time that coronavirus cases have been detected in Moria, nor the first time that refugees have been forced into isolation.

But even if the above scenario corresponds to reality, we need to take into consideration that all over the world, the coronavirus pandemic is accompanied by significant anxiety, even panic, among a wide section of patients and their families. One can therefore imagine what it means to get sick in Moria, in inhuman living conditions that certainly multiply the risks.

The conditions of detention in the “reception” centers have turned them into hellholes. When you stack thousands of people in tents and makeshift sheds, with no prospect of improvement of the situation, you are actually creating an explosive mix, which will sooner or later lead to either a serious accident or an outburst of rage and indignation.

At the same time, the possibility of the arson being an act of far-right groups is not even being considered. It would not be the first time that far-right and neo-Nazis have attempted to set fire to, or attack and wreak havoc on refugee camps.

A more recent example was the arson that led to the destruction of a solidarity warehouse in Chios last March. In November 2016, neo-Nazi groups attacked the refugee camp in Souda, Chios, destroying and burning about 100 tents, while many refugees needed to be hospitalized.

So far, no scenario for the cause of the fire has been confirmed. But no matter what really happened, one thing is certain: when 12,500 refugees are crammed into facilities that have a capacity of 3,000, with no sanitation conditions in the midst of a pandemic, Moria was an “accident waiting to happen ”.

According to statements by the government spokesman, Stelios Petsas, Lesvos was declared to be in a state of emergency, while the government announced that by Wednesday night (September 9) the issue of housing of the 12,500 refugees living in the detention centre would be resolved.

This comes from the same government that since the beginning of the pandemic has not taken any substantial measures either to prevent the spread of the coronavirus in the refugee camps, or improve the inhumane living conditions of the refugees. It is an extension of the government’s failed policy with regard to the overall management of the refugee issue, which ultimately only succeeds in reinforcing racist and xenophobic rhetoric.

We cannot have any confidence in the government, or regarding where they will transfer the homeless refugees (the plans for tents and boats are tragically inadequate, and result in people sleeping in fields and streets). The same goes for what conditions the refugees will be expected to live in the near future.

Even in hindsight, even under these conditions, the workers, the youth, the movements, the forces of the Left, must demand: