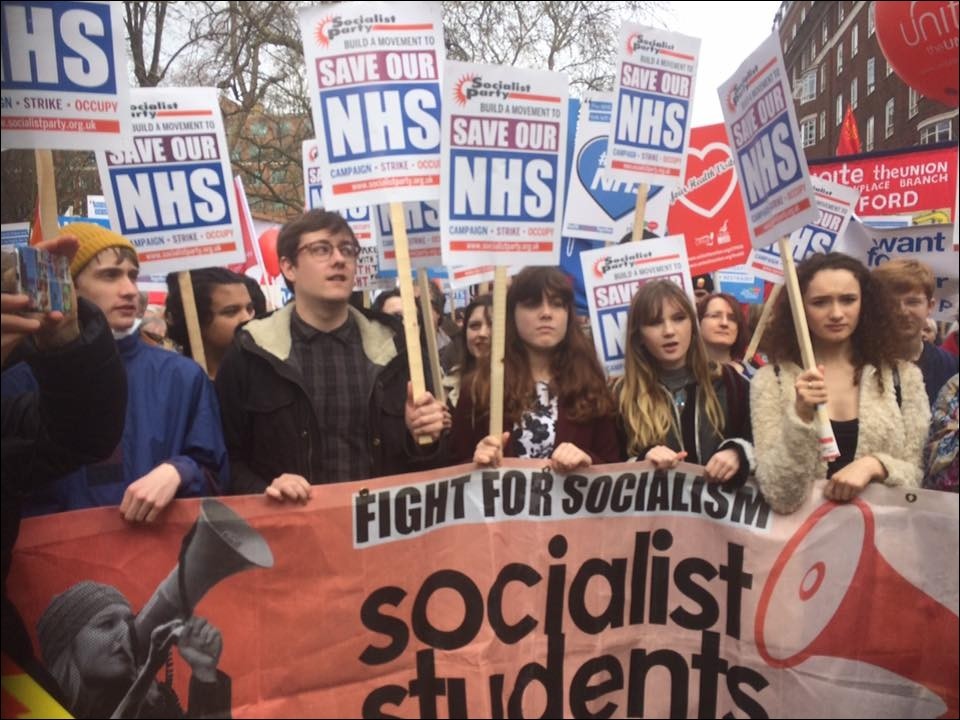 Up to 250,000 March in National Protest, Organized from Below

For hours they poured off coaches and out of Euston and other stations as over 100,000 people – some estimates were as high as 250,000 – streamed to London in order to march in defense of the National Health Service (NHS). Stop STPs “slashing, trashing and privatizing our NHS” was repeatedly chanted by the predominantly working-class marchers and from the platform. The Socialist Party’s placards “build a movement to save our NHS – campaign, strike, occupy” were all snatched up.

The demonstration was organised from below; initiated by local health campaigns via the Health Campaigns Together umbrella group. Mike Forster, Socialist Party member and chair of one local campaign that helped initiate the demo, “Hands off Huddersfield Royal Infirmary (HRI)”, described how he had first raised the idea on a protest of a few hundred the previous autumn. Across the country the Socialist Party mobilized all-out for the demonstration – distributing over 100,000 leaflets advertising the March 4.

While the demonstration was initiated by community campaigns, there were also large contingents of trade unionists. By the day of the march, 13 national trade unions had supported the demonstration. Three general secretaries – Len McCluskey of Unite, Mark Serwotka of the PCS, and Dave Ward from the CWU addressed the march. Shamefully, Dave Prentis, the general secretary of the biggest health union, Unison, did not speak and the union’s leadership only belatedly and halfheartedly supported the march. It was a different story among Unison members, however, who came to the march in their tens of thousands.

Without doubt the size and determination of the demonstration will have given confidence to health workers that it is possible to win the battle to save our NHS; not only to stop the current, potentially fatal, round of cuts and privatization but to kick out the privateers leaching the NHS dry.

The Socialist Party gave out 30,000 leaflets on the demonstration calling for the march to be the first step of a mass campaign to save our NHS. We sold over 1,000 copies of the Socialist.

Throughout the day we pointed out that the Tory government – with a tiny majority and an unelected prime minister – is weak and can be defeated. The NHS Sustainability and Transformation Plans (STPs) could become Theresa May’s poll tax. We called for a national day of action with massive local demonstrations in all 44 STP “footprint” areas to stamp on the STPs. The idea that such a day of action could take place on May 1 was raised from the main stage.

We also demanded that the trade union movement and the Labour leadership call a second – even bigger – national demonstration, using the full power of the TUC’s six million plus members to protest in defense of the NHS. Such measures would further boost the confidence of NHS workers to take coordinated strike action against the pay freeze and the destruction of the NHS. Occupations to stop hospital closures could also play a role.

We explained that this movement should not be limited to saving the NHS, but stand for defense of public services as a whole. Peter Taaffe, general secretary of the Socialist Party, spoke at the National Shop Stewards’ Network (NSSN) stage outside the Department of Health, saying: “The trade unions should organize a massive demonstration not just in defense of the NHS, but against all the cuts in councils, schools and other public services. This should be a step towards a one-day general strike to show our determination to defeat this government.”

On the main stage, Jacqui Berry, staff nurse, one of the demo organizers and member of the Socialist Party, put it clearly: “The age of pay restraint has lasted longer than World War Two. If pay restraint continues our unions have to ballot for strike action.” She went on: “Today we’ve made history marching together, but we may well have to strike together.”

Mark Serwotka, general secretary of the PCS, also called for coordinated strike action against pay restraint. It is urgent that the left unions come together to discuss making this correct idea a reality.

It is to the credit of Jeremy Corbyn, Labour leader, and John McDonnell, shadow chancellor, that they both supported the demonstration and spoke at it. John McDonnell declared: “Whatever it takes to save the NHS, including industrial action if it takes place, Jeremy Corbyn and I will be with you in parliament and on the picket line.”

Jeremy Corbyn rightly pointed out that Nye Bevan and others who founded the NHS faced relentless hostility from the big business supporting media just as fighters for the NHS get denigrated today. The only answer, he rightly declared, “is to say it like it is.”

Without doubt leading a movement to save the NHS and oppose austerity would be the most effective way to fight back against the constant attacks that the representatives of the capitalist class are raining down on Jeremy Corbyn. “Saying it like it is,” however, means recognizing that the representatives of big business are inside the Labour Party as well as outside it.

The privatisation of the NHS has accelerated under the Tories but went a very long way under New Labour in government via the Private Finance Initiative and other measures. The Blairite politicians are now determined to defeat Corbyn exactly because he was elected on policies that include renationalisation of the NHS.

The morning after this magnificent demo John McDonnell told the Andrew Marr show that he wanted to sit down with Peter Mandelson and Tony Blair and “have a cup of tea.” To continue to call for unity with the Blairites, who support the private sector profiting from our public services and who aided them doing so when in office, is the very opposite of ‘saying it like it is’.

To continue to compromise with the Labour right would inevitably mean continuing to retreat on anti-austerity policies and handing victory to the pro-capitalist elements of the Labour Party.

Fighting for socialist policies, campaigning, as Dave Ward put it, to “take back control of our NHS, our railways, our postal and telecoms services, our workplaces” via democratic public ownership, requires standing up to the Blairites as well as the Tories and the right-wing press.

One immediate step that must be taken is to call on Labour councils to reject the STPs. As Jacqui Berry put it when she spoke: “We’ve heard from the leader of Hammersmith and Fulham council (which rejects its STP); it would be remiss of me not to ask the leader of the opposition to write to every Labour council asking them to follow its lead.” Jeremy didn’t refer to Labour councils in his speech, but should now urgently write to them.

Saturday’s demonstration was a tremendous success, and an important step to building a movement capable of defeating the Tories. Now it needs to be built upon.