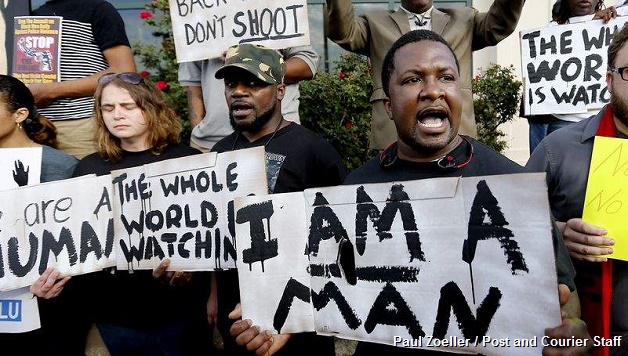 The one year anniversary of the murder of Mike Brown, killed by a police officer in Ferguson, Missouri, is right around the corner. His death, like that of 14-year-old Emmett Till at the hands of racists in Mississippi in 1955, helped spark a mass movement. Today it is known as Black Lives Matter, a way to tell the world that our lives are just as important as any other human being’s.

After making significant gains through the Civil Rights and Black Power Movements, the black working class has faced a series of attacks. Starting in the 70s, we saw the beginnings of the deindustrialization of major American cities. Then, in the 80s, the War on Drugs began the horrific process of mass incarceration followed by Clinton’s neo-liberal gutting of the welfare system in the 90s. All of this has disproportionately hurt black Americans.

Although this process has been happening over decades, there has been no real sustained fightback.  For this reason the death of Michael Brown is a turning point in history for black people in this country and around the world. To the workers and youth in Ferguson, Missouri facing day to day brutality, this young brother’s death was the last straw. Whether they were affected by unemployment and low wages or street harassment from cops or the criminalization of poverty, they had had enough. The more than 100 days of straight protesting inspired hundreds of thousands around the world to stand up against institutional racism.

An example of the full extent of institutional racism has only just come to light. The Bureau of Justice Statistics recently acknowledged that the FBI has been underreporting deaths of civilians by cops by nearly 50%! There are 18,000 law enforcement agencies in the U.S. (more than public school districts), but there is no law that mandates them to report to the federal government when they kill a person. Freddie Gray’s home state of Maryland and many others flat out refuse to collect data on police killings. The under reporting of police killings is yet another way the ruling class masks the reality of the institutional racism that exists.

The ruling elite does an excellent job of manipulating people into thinking that, if they are not living the “American dream”, it is their own fault. They claim that racism died with slavery and Jim Crow and are happy to throw the fact that we have a black president in the White House in our faces when we stand up against racism.

The massacre of nine black people in Charleston, South Carolina by a white supremacist was initially described as a heartbreaking incident by a mentally unstable man. But the mainstream media has buried the stories of the six black churches that were torched in the weeks following the Charleston killings.  They would have to address the issue of race terror groups and would not be able to simply blame it on insanity.

Removing the Confederate flag from statehouses in the South is galvanizing thousands of people. This is a symbol of slavery (although many white Southerners might not see it that way). It has been used again and again by to rally reactionary forces and has no place on public buildings. But it is also clear that many figures in the establishment hope to cut across the broader movement by rapidly removing it.

What is urgently needed is to link the demand for removing the Confederate flag to building a mass struggle against all forms of systemic racism and poverty from voter suppression to cop brutality, mass incarceration as well as poverty wages.

150 years after the defeat of the Confederacy and 50 years after the Voting Rights Act, it’s clear U.S. society has failed to overcome the racist legacy of slavery, of super-exploitation and brutal divide and rule tactics. By fighting against racism and linking this to a bigger struggle by the powerful, multiracial working class for a socialist society, we can finally put all of these horrors in the history books where they belong.