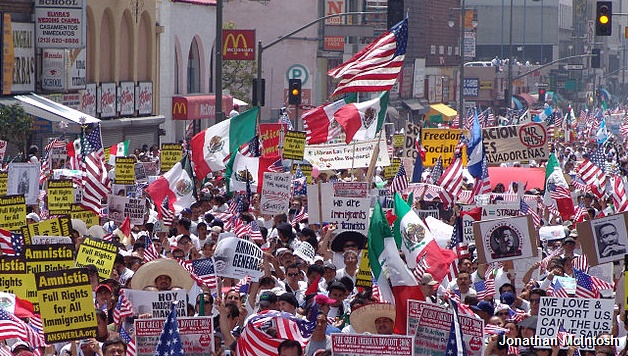 The fate of millions of undocumented workers for whom the threat of deportation had been lifted by President Obama’s executive order last November now rests with a three-judge panel in New Orleans. Twenty-six Republican-led states brought the legal challenge, which resulted in a right-wing judge in Texas putting the whole program on hold in February.

From the start, we in Socialist Alternative have said that, while Obama’s executive order is an important step forward which we welcome, it does not go nearly far enough. After six years of record levels of deportations on his watch, the executive order promised to lift the constant terror of families being ripped apart for less than half of the undocumented population. We have consistently called for lifting the threat of deportation for all those who have been forced by economic circumstances, often the result of U.S. policies, to make their way to the United States.

The political establishment in Washington has been deadlocked for years on the question of “comprehensive immigration reform.” Big business supports the idea of granting status to immigrant workers but with a very long “path to citizenship” and minimal legal rights as a way of maintaining the flow of cheap labor and keeping immigrant workers in a third-class status.

On the other hand, the right wants to maintain and intensify the current regime of terror in immigrant communities and spend billions on ever-higher fences at the southern border. They use the issue of immigration, along with gun rights and abortion, to whip up their base.

With 11 million undocumented workers here, the third-class status of these workers only serves to divide the working class. It forces a whole section into accepting poverty wages, thus undermining all wages. This can be cut across by a joint fight for full legal rights for all undocumented workers, an end to poverty wages for all, and a massive works program to create jobs, housing, social services, and free education for all through college. On the basis of a joint struggle for these demands, working people in the U.S. have no interest in maintaining the current position of millions of undocumented workers. In fact, the opposite is the case: Full rights for all immigrant workers will enormously strengthen the position of the working class in its fight with the 1%.

In 2005 and 2006, immigrant communities rose up and demanded their rights. Millions came onto the streets across the U.S. in the biggest mass demonstrations in the country’s history. This culminated on May Day 2006, when hundreds of thousands of immigrant workers went on strike. The port of Los Angeles was shut.

This inspiring mass movement succeeded in pushing back the attacks of the right and pointed the way toward the revival of a fighting mass labor movement. Unfortunately, it was largely isolated from the native-born working class and was then ground down by ferocious repression. Since then, immigrant “Dreamer” youth have maintained a heroic struggle against the unjust immigration laws. Workers facing deportation have gone on hunger strike in ICE jails.

Today, as tens of thousands of workers and youth take to the streets calling for $15 and a union and to assert that Black Lives Matter, there is a real opportunity to build a mass movement of working people that would unite key sections of the native-born working class and immigrant workers around a common set of demands. Such a movement must be independent of the Democrats, who at every step loudly proclaim their sympathy with immigrants but are only willing to countenance reforms acceptable to corporate America.