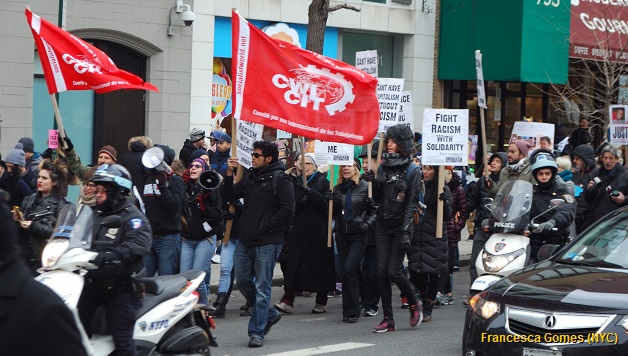 The celebration of Dr. Martin Luther King, Jr.’s birthday is traditionally marked with rallies and marches honoring Dr. King’s life and legacy.  However, this year’s MLK Day comes in the wake of the explosive #BlackLivesMatter movement, organized by thousands of black youth and allies across the country engaging in direct actions, rallies, and marches challenging police brutality and the racist justice system.  Below we report on the impact #BlackLivesMatter had on MLK Day events in cities across the country:

Boston celebrated Martin Luther King, Jr. Day with a march against police brutality, racism, and poverty that attracted around 1,500, with many people joining as the march proceeded from the Old State House (the site of the Boston Massacre) to Boston Commons, and then around the commons to the State House.

Socialist Alternative joined many other left groups in planning the logistics and political message of the march. During planning meetings we raised our demands for a $15/hr minimum wage and stopping the Boston Olympics bid, which were democratically adopted by the march organizers with near unanimity.

Members from traveled from Worcester, New Hampshire, and Lowell to participate in the march. The mood was energetic and there were fresh chants which hadn’t reached Boston before – ‘Indict, convict, send those killer cops to jail. The whole damn system is guilty as hell!’ The march was preceded and followed by great speakers, the large majority of which were socialists who emphasized the need for systemic change. At the end, the speakers relentlessly called for everyone at the march, organizer or not, to meet again and organize the next march, laying the ground for future mass actions.

Over 2,000 people participated in the #Black Lives Matter demonstration on Martin Luther King Day in the Twin Cities. The march began by shutting down a major intersection in St. Paul about four miles away from the Minnesota State Capitol. We then marched towards a major highway connecting the Twin Cities. Dozens of state troopers blocked the onramps, preventing protesters from taking the interstate. Nevertheless, the determined protestors forced the police to shut down all lanes of traffic. We continued the march to the state capitol. By the end of the day, nearly every headline read the emerging movement had reclaimed MLK Day as a day of struggle.

This MLK Day demonstration was fueled by another police murder of Marcus Golden, a 24-year-old black man. His family led the demonstration. The St. Paul Police Department has not released the details of what happened, alleging that Golden drove at the officers with his car. They claim he had a gun at the scene, but the gun was found after Golden was dead. Like so many other cases, it seems Marcus Golden’s biggest crime was sitting in a car late at night while being black. It shows the need to continue building this powerful movement.

On November 25, Mobile Bay Socialist Alternative called a march and rally demanding an end to de facto legal immunity for police, by creating a civilian oversight board with full powers over the police.

We received extensive local media coverage at this event, and made some important contacts from an organization that hosts Mobile’s annual MLK marches, as well as other local activists. We were also able to use this rally to build a public meeting the following weekend, where we called for the forming of the Mobile Commission of Police Oversight as the means for a sustained campaign for police accountability. At our first meeting on December 13, we created a steering committee, and began work toward a legal foundation for a civilian oversight committee.

Mobile has not had a police killing that has grabbed national headlines, but the political, economic, cultural, and even geographical marginalization of black people in this majority-black city is and has always been starkly evident and the #BlackLivesMatter movement is providing a vehicle for a long-awaited change.

Our radical demands for a civilian oversight committee; an unbiased, independent prosecutor to take cases against police officers; and body cameras that cannot be controlled by officers and that feed to a third party server are immensely popular and have received tremendous support from the public.

At this year’s 500 strong MLK rally, Socialist Alternative again had a speaker who stressed Dr. King’s radical legacy as opposed to the sanitized version we usually hear, in particular the link between racial justice and economic equality. These points were well received because there is an overwhelming demand for a reimaging of Dr. King as the radical he truly was.

Socialist Alternative had a lively contingent at the New York City MLK Day march, called the 4 Mile March and organized by the Coalition Against Police Violence, with chants like “How do you spell racist, N-Y-P-D!”, “No justice, No peace!”, and “If we don’t get it, Shut it down!” having the biggest impact. While the number at the march was considerably lower than previous rallies, between 400-500, there was clearly huge support in general for the movement, with pedestrians joining in the chants and retail workers showing solidarity.

The speakers were mainly the families of those who have lost loved ones to police brutality, including Hertenceia Peterson, the aunt of Akai Gurley, who spoke about the systemic nature of police brutality, Erica Garner (the daughter of Eric Garner) spoke to the fact that we are struggling against many of the same problems that Martin Luther King fought against, and organizer Esther Baldwin of Find Your Spine cited the prison industrial complex as yet another feature of the movement against police brutality and called for the need to have independent prosecutors.

Socialist Alternative member Toya Chester was one of the final speakers leading the call for economic justice alongside racial justice. The fight for $15 clearly resonated with people and cheers went up from the crowd. Our clear demands meant that we had many people around us engaged in conversations of how to take the movement forward. There was a call to continue building the movement and justice for the victims. Next steps included a call to action to meet on Jan 22nd at the Staten Island Supreme Court for the trial of Ramsey Ortiz to protest against this police repression. Members of Oakland/Bay Area Socialist Alternative marched with thousands of others to commemorate Martin Luther King, Jr. Day and to demand an end to police terrorism of communities of color. The march began at approximate 1 PM. We marched from Fruitvale BART station to the Coliseum BART station and weaved through several low-income neighborhoods, where many residents and workers waved and held signs in support of the march. A local convenience store owner left bottled water on the sidewalk for marchers to take for free.

Some in the crowd sang an improvised version of the old labor union song “Which Side Are You On?” Several held “Black Lives Matter” signs, and, at the beginning of the march a group of children chanted “Black lives matter!” The crowd was largely peaceful, until the end when a few marchers screamed in some police officers’ faces, asking them when they were going to stop killing people. The Coliseum BART station was shut down shortly after that.

MLK Day was marked in Philly with thousands of Philadelphians coming together in one of the largest marches since Occupy. The march, organized by an interfaith group called POWER and the MLK DARE coalition, put forward three concrete demands: End police brutality and violence, Full funding for education and a democratically elected school board, and a $15 an hour minimum wage and the right to form a union.

The rally started at the school district building, the home of Philadelphia’s unelected School “Reform” Commission where thousands of protesters rallied around the demand for full funding for education and a democratically elected school board. Throughout the march, the demand for a $15 an hour minimum wage resonated and was extremely popular. The centrality of the demand to raise the minimum wage pushed $15 into the mainstream political discussion and allowed for the call to raise the wage to reach a much larger audience than before. In this march, there was a conscious shift in the political situation in Philadelphia, where MLK’s true legacy of calling for economic justice alongside racial justice, came to the forefront of discussion and it was clear that economic demands were needed alongside the demands to end police brutality.

The MLK march, led by community organization Don’t Shoot Portland, began in historic Peninsula Park. About 150 protesters marched down Rosa Parks Way and MLK Blvd slowing traffic and bringing it to a halt at intersections along the way.  Each intersection was seized for four and half minutes to symbolize the four and a half hours Michael Brown’s body was left in the street.

The protesters were led by enthusiastic and entertaining youth who chanted, “I dare you… to get out of your car… and join us!” to surrounding motorists. At other times we yelled “Black Lives Matter” and ” My hands are up… don’t shoot!” We also sang “Which side are you on?”

There was mostly overwhelming support, from people coming out of their apartments, houses and businesses to wave and clap, to motorists honking enthusiastically. One man came out of his business filled with emotion saying, “You made my day… seeing this just made my day.”  After arriving at our destination, a statue of Dr. King, speeches of Dr. King’s were read aloud.

The MLK Day march in Seattle was notably larger than previous years, with about 7,000 people marching.  The rally’s keynote speaker–an activist from Ferguson–established the clear messaging of Black Lives Matter, and tied the success of a new Civil Rights Movement to a rejection of the criminal injustice system and to solutions of the underlying economic inequality.

After the march got underway, Seattle City Councilmember Kshama Sawant spoke in front of the Youth Detention Facility, addressing the criminalization of Black youth and the school-to-prison pipeline. The overwhelmingly positive response to Kshama’s speech, as well as her work on the council, shows the advantages of electing real fighters on the side of working people. Material handed out by Socialist Alternative members was well-received and many people signed up to get involved. Many expressed an interest in helping our campaign to re-elect Kshama Sawant this year. Socialist Alternative St. Louis led a successful diversion of several hundred marchers at the annual St. Louis MLK Day parade to New Life Evangelistic Center –a homeless shelter that serves hundreds set to be closed due to pressure by wealthy St. Louis urban land developers. The parade’s scheduled destination was the historically Black College, Harris Stowe University. We put out the call for the intervention and worked with several activists and organizations, including the artist collective, Artivists and South City Solidarity, a multi-racial group of activists in St. Louis City working in solidarity with the #BlackLivesMatter movement. We used banners and a large arrow to redirect the march. When we arrived at the shelter, marchers chanted “Homeless Lives Matter” and the Organization of Black Struggle served food and donated clothing to the homeless. Socialist Alternative member Eljeer Hawkins gave an extremely well received speech at the shelter, connecting MLK to #BlackLivesMatter and the need to build for democratic socialism. In the evening we held an event titled “Radical MLK: Connecting Civil Rights to BlackLivesMatter with approximately 50 people in attendance. On Sunday prior, we also held a community discussion on the upcoming elections in Ferguson and St. Louis City (alderman) to an audience of approximately 25 people. As the movement is posed with the question of elections and corporate sponsorship of some organizations in the movement, people are very open to our ideas for democratic accountability of the movement, a civilian review board with teeth, linking the movement with the struggle for $15 hr and the need to build an independent electoral wing of the movement.